Changing words doesn’t change what they refer to — but it may change attitudes.

Words have been in the news a lot lately.

Of course, one could make the argument that what we call “the news” is nothing but words. We hear and read about “the news” in the words that are handed to us by others.

Even when we view wordless videos of tsunami waves rushing through village streets and hear desperate screams for help, those sights and sounds have been presented to us in a verbal context.

I confess that I don’t see anything particularly interesting or significant about studying words. There’s a lot of wisdom in the “rose by any other name would smell as sweet” thing. Whether you use this word or that word, changing the word doesn’t change whatever it is that the word is referring to.

However, when people act differently when one word is substituted for another; when their attitudes change upon hearing a report phrased in certain language; when a message can be intentionally framed to manipulate how people will respond to it—now that I find not only interesting but crucially important.

I would argue that the job title doesn’t materially affect the work itself. What matters is how the viewing public reacts to the words. If Channel X promotes so-and-so as a “weather forecaster” and Channel Y promotes you-know-who as “senior staff meteorologist whose forecast has the seal of approval of…,” you can probably guess the results.

It’s possible that a person with a doctorate in meteorology will consistently make more accurate forecasts than an attractive English major who wants to become an “on-air personality.” It’s also possible that a mere “forecaster” with 30 years of experience might prove more reliable than a young degreed “meteorologist” who graduated magna cumulus laude.

Is it the quality of the work that matters or the words in the credentials?

Nationally, our political landscape is littered with verbal land mines.

I believe that this phrase has emerged because it’s a politically correct euphemism used to distinguish what’s actually happening from what political leaders want us to believe. On the one hand, we have the language coming out of Washington about what’s going on in Iraq; on the other hand, there’s “the situation on the ground.”

In the Social Security debate, we have the phrase “personal accounts” pitted against “privatization.” We have conservatives changing the terms of the environmental debate from “global warming” to “global climate change.” (It’s too bad we don’t have a properly credentialed “meteorologist” handy to settle which phrase is meteorologically correct.)

Last fall, then-Secretary of State Colin Powell made news around the world when he used “genocide” in relation to the “situation on the ground” in Darfur, Sudan.

The appropriateness of the word “genocide” was debated as a factor in how nations around the world should respond. So far as I can determine, nobody disputes the assertion that government-backed janjaweed militias are committing atrocities against the people of western Sudan. But it seems as though the international response is conditioned by a word: If it’s “genocide,” we do X; if it’s not “genocide,” we can get by with just Y.

More than 70 years ago, the author of a book titled Science and Sanity forecasted that “those who rule the symbols rule us.”

We are confronted every day by those who seek to “rule” our thoughts, attitudes and behaviors. From frivolous advertising to ratings-driven television to global propaganda, we are bombarded by persuasive words, images and symbols.

The challenge as I see it is: Who rules your symbols?

Steve Stockdale is Executive Director of the Institute of General Semantics in Fort Worth and is a member of the Star-Telegram’s community columnist panel. 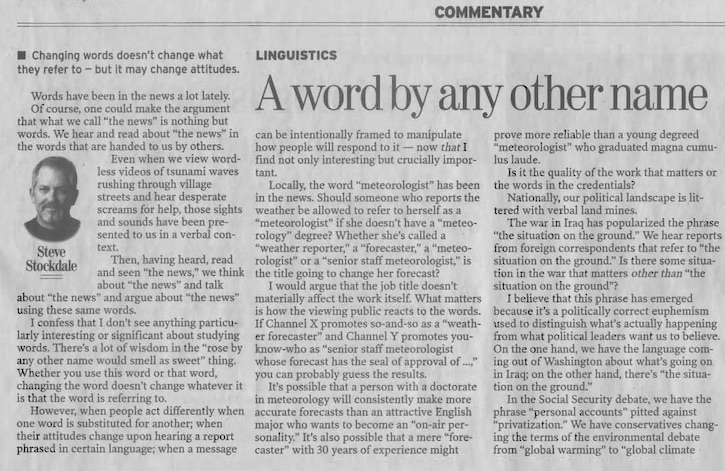 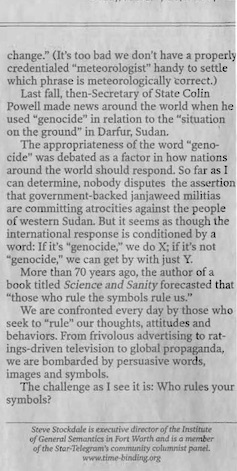