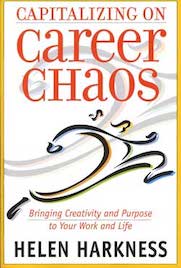 I contributed to the book by a mentor, Dr. Helen Harkness, Capitalizing on Career Chaos: Bringing Creativity and Purpose to Your Work and Life, (2005, Nicholas Brealey Publishing, ISBN 0-89106-209-2). Following are the excerpts that document my case study.

Success Based on the Authentic Self (p. 41)

Steve graduated from the U.S. Air Force Academy in 1976 and served in the air force as an instructor navigator in the KC-135 air refueling aircraft until 1982. Then he left the military and began a career in the defense industry. Although he put his generalist skills to good use with diverse responsibilities in engineering, finance, marketing, and project management, he always felt a bit like a fish out of water.

Steve decided to cut back on his defense industry job so he could create more time for his passion — writing and teaching about the field known as general semantics. He had served since 1996 as a trustee for the Institute of General Semantics in New Jersey and felt this work was worthy of as much of his time as he could allow. He envisioned working as a part-time consultant so that he could devote more time to the Institute.

Steve boldly ventured out onto a very thin limb. He quit his defense industry job to start an Internet-based business to cater to adult singles. He was convinced this demographic group had a unique set of needs and offered a business opportunity, but he couldn’t figure out how to make money with it.

In June 2001, he abandoned that idea, sold his house, traded down cars, put his belongings in storage, and decided he would look for a teaching job. Two months of researching and learning about the Texas public school bureaucracy relieved him of that notion.

Embracing his career uncertainty, Steve loaded his car and traveled around the western United States. He was visiting relatives in Washington on September 11, 2001. He immediately headed back home to Dallas. On the way there, he learned that the Institute of General Semantics in New Jersey needed someone to organize sixty years of archives and library materials.

Given his interest in and knowledge of the organization, and the fact that he wasn’t doing anything else, he volunteered to spend the next three months in New Jersey working in the archives. That led to a part-time job for him with the Institute beginning in 2002, which led to him moving the archives and library to an office in Fort Worth. Steve became the full-time executive director of the organization in January 2004, when the Institute moved to Fort Worth. Steve’s career is now in line with his authentic self.

Obtain a small notebook to carry in your purse or pocket for one month.

When Steve, the former air force instructor navigator who wanted to work in the field of semantics, began looking at his Meaning Magnets, he discovered he wanted to:

The final accomplishment I related concerned a one-act play I wrote for a creative writing class I took at the Air Force Academy. The play, “The Unveiling of Ourselves,” was written as a morality play to express concerns I had at the time regarding the failure of people to assert their independence and individuality while falling victim to either the influence of peer pressures or the seduction of the ways of the world.

Reflecting back on that theme years later, I’m amazed that, in a sense, my entire adult life has been spent grappling with the same issues that the protagonist faced in trying to unveil his own true self. The play won an award for the best one-act play and was published in the annual collection of creative writing produced by the Department of English and Fine Arts.

Here are some of the talents, skills, and abilities I learned I have:

I thought about how easy it has been for me to overlook and underappreciate my own talents and skills and about how I tend to erroneously assume that what comes easy to me does so for everybody else.

For my success criteria — my glass balls — I want and need the following: