In 21st-century America, honor is an option — not necessary, not sufficient, desirable only if it doesn’t jeopardize the bottom line.

I grew up playing sports in the Texas Panhandle. On my bedroom wall, I had a plaque inscribed with a then-famous Grantland Rice saying:

For when the one great scorer comes to write against your name, he marks — not that you won or lost — but how you played the game.

I’d like to think I took that value to heart.

In 1972, my ability to throw a football, and a decent SAT score, earned me an appointment to the Air Force Academy. On the field, “how I played the game” warranted only a two-year intercollegiate career.

Off the field, I persevered to graduate. I attribute that in large part to my early-ingrained respect for how I (in the broader sense) “played the game.”

At the Air Force Academy, how you were supposed to play the game was codified in the cadet honor code:

We will not lie, steal, or cheat, nor tolerate among us anyone who does.

Those first three will-nots were straightforward enough. The sticky wicket was that toleration thing, which meant that if we knew of an honor violation, we were bound by the code to report it.

If we didn’t report it — if we tolerated a violation — we could be judged as guilty as the deed-doer, and expelled just as quickly.

What’s up with that?

Simply not violating the will-nots doesn’t ensure that one has internalized a sense of honor — but it’s a start. The “end game” of the honor code is to develop officers, commanders and leaders whose character is clearly above reproach. “How you play the game” is integral to reaching the end game; the end is defined by the how.

Granted, some Air Force Academy cadets, and graduates, have not always brought honor to their institution. Periodic cheating scandals and worse, including the sexual assaults of recent years, cannot be condoned, rationalized or in any way tolerated.

But for those who continue at the service academies in Colorado Springs, West Point and Annapolis, honor is still taught and valued as the bedrock of their institutional cultures. At least they’re trying.

At least that’s what we were taught.

Yesterday, President Bush addressed the 2005 graduating class of the Naval Academy. Today, Gen. Richard Myers, chairman of the Joint Chiefs of Staff, is scheduled to speak to the graduates at West Point. On Wednesday, Vice President Dick Cheney is scheduled to give the commencement address at my alma mater.

These three men will welcome 2,700 new lieutenants and ensigns to the “real” America that lies beyond the parade grounds, math blackboards and fields of friendly strife.

What might they say to these young officers to prepare them for what lies ahead? What pre-eminent American value should these future leaders embrace to guarantee success in the “real” America of the 21st century?

Whatever it takes. Make it happen. Ignore the rules. Make ’em prove it. It’s not how, just how many. Failure’s not an option; admitting it isn’t, either.

Image is everything. Dress for success; line the right pockets. Say it is anyway. Claim a mandate. Perception is reality.

Buy two flags: wrap yourself in one, salute the other and they’ll love ya forever and ever. Amen.

Do the deal. Round it up. Make the numbers. Cork the bat. Shoot the ‘roids. Get the votes. Get the confession. Give ’em his medal, but don’t tell ’em it was our bullet.

In 21st-century America, honor is an option — not necessary, not sufficient, desirable only if it doesn’t jeopardize the bottom line. As an American value, it ranks a little above recycling but way below redistricting.

Americans talk a good game, but Col. Jessep had it right in A Few Good Men: We can’t handle the truth.

We’ve tolerated our vain hypocrisies, quibbles and misrepresentations for so long that we can’t distinguish fact from conviction, trust from hope, appearance from reality.

Reporting to the Classes of 2005, and to honor America: May the Code be with you.

Steve Stockdale, Spirit of ’76, serves as executive director for the Institute of General Semantics and is a Star-Telegram community panel columnist. 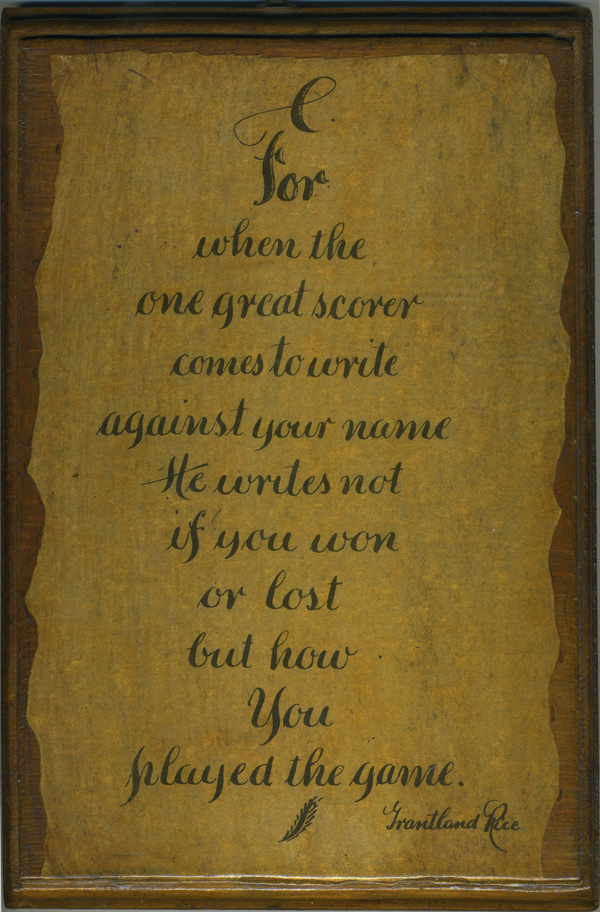