[Disclaimer: I’ve never used the word “expert” to refer to myself about anything. Not seriously. The background for this story is that Aline read the catalog description of the course and decided to enroll herself. Prior to the first class she introduced herself as a reporter from the Dallas Morning News.]

As a divorcé, Steve Stockdale has a lot of experience with midlife dating.

But he’s also a student of how humans use language to interact with the world.

He has combined the two to come up with what he calls “lucid dating” – “dating from an intelligent, self-aware and enlightened perspective.”

“When we have a first date with someone, whether we’re aware of it or not, we have expectations about how they should look, behave and the kinds of questions they should ask,” he says.

The trick is to be aware of what your expectations are and decide whether they’re holding you back from meeting interesting people.

For instance, he says, many people in online dating services lie about their age (namely women) or their height (namely men), simply because they know they’ll get red-lined by potential dates if they tell the truth.

“They look at the whole online thing as getting an interview, getting into the door, then my natural charisma will take over,” he says.

Mr. Stockdale, 49, is founder of the Dallas-Fort Worth Center for General Semantics in Fort Worth. He also teaches an informal class in lucid dating for adults at Southern Methodist University.

General semantics is a field that examines how language affects the way people interact with the world and the assumptions that they make about the situations around them, based on their view of the world.

“All these aspects of our background come into play whenever we go into a new environment or new event,” he says.

“Don’t let yourself fall into this easy mode of generalizing,” he warns.

“I haven’t dated since I was in my mid-20s,” says Laurie Ellis, 48, a recently divorced interior decorator from Cedar Hill. “It’s like learning how to do something new.

“I would like to find several people to go to dinner with; if I’ve got theater tickets, someone to go with me, man or woman.”

Glenn Harding, 54, a sales consultant from Dallas, says: “It really boils down to the fact that we’ve never been taught how to connect to each other.”

He was thinking of writing a book called Near-Date Experiences when he realized that most of the stories he heard from other people were more sad than funny.

Mr. Stockdale was divorced from his high school sweetheart in 1993 and went through much soul-searching and therapy before coming up with lucid dating. “I thought, ‘Gee, I wish I’d known some of this stuff earlier because I could have taken some pre-emptive action, that I wouldn’t be so confused … that I’d need to see a therapist,’ ” he says.

His therapist pointed out that if he wanted to meet women, he had to expand his horizons beyond his car, apartment and workplace.

“How many of you women are going to say ‘no, thanks’ to Mel Gibson because he’s over 42, or ‘no way!’ to Tom Cruise because he’s under 5-feet-10?” he says on his Web site, Thisisnotthat.com.

He also recommends that people try something that they normally might not do to meet people – within the bounds of safety, of course. Going to a bar or trying an online dating service can give people a fresh perspective.

“You’d be surprised about what some people carry inhibitions about,” he says.

Many women, for instance, are appalled at the idea of eating out on their own, even on business trips.

“They’d rather go get a root canal before they appeared out in public by themselves, eating,” he says.

“We need to learn not to ‘should’ ourselves. We don’t do things we’d like to because we worry about how we’d be perceived.”

Once you’ve got a date, he advises, simply be honest and try not to expect too much. “I’d urge people not to look at it as an interview,” he says. “As much as possible, try to enjoy the moment. Say, ‘I want to enjoy this next hour,’ and worry about what happens afterwards, afterwards.”

And hiding your normal personality isn’t a good idea either. For instance, someone who laughs loudly and is trying to suppress it is less likely to have a good time.

“You’re not giving a true reflection of yourself to the other person, and you’re probably not going to enjoy the evening, because you’re spending a lot of energy suppressing that,” he says.

Mr. Stockdale says he once talked to a woman who gradually revealed she had lied about her age, she’d actually been divorced twice instead of once, and she’d lied about the age of her daughter.

“Why even tell these stories, these lies?” he says.

Steve Stockdale will be leading two four-session Lucid Dating courses at SMU. The first session runs on Tuesdays, Jan. 27 to Feb. 17. The second will run on Thursdays, April 1-22. Each course is $59.

All sessions will be from 7:30 to 9 p.m. and will include at least one out-of-classroom get-together. 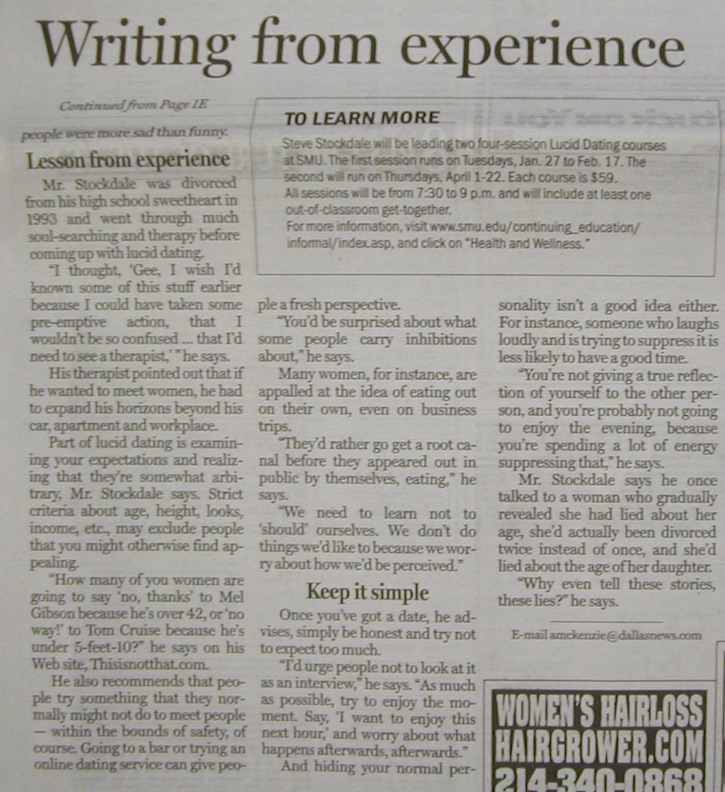