Originally posted at my “From Here to Discernity” blog at SantaFe.com (8.22.11)

Yesterday I sauntered down to town to stroll through my third Indian Market. I’m a looker, not a buyer or collector, so my eye is less critical and less easily captured. If pressed to honesty, I’d have to admit I’m there for the gestalt of the experience, which includes a lot of crowd wondering — why are they looking at that, where will they put it, what does the rest of their house look like if that’s going to fit in?

While playing my little gestalt game yesterday, I had an insight about beauty. Actually, it wasn’t an insight as much as it was a recall of an aphorism I learned as a child. From an ash tray.

When I was in grade school, we lived in Pampa, Texas. Even though neither of my parents smoked, we had ash trays scattered around the living room. Probably as much for decoration as functionality.

One of these was a white, oversized, hard-glazed ceramic thing in an irregular shape. Inside was a cartoonish painting of a Cruella-Deville-ish looking lady with a big cigarette holder sticking out of (or into?) her mouth. A painted caption beside the lady read, “Beauty is in the eye of the beholder.”

That oft-repeated cliché has stuck with me as an adult. Not because I’ve heard it repeated so often, but because of its simple obviousness and unintended (I’m sure) neurologically-accurate statement of a biological fact.

During the Renaissance, Leonardo da Vinci spoke of this individual uniqueness:

“All our knowledge has its origins in our perceptions.”

Jeff Hawkins, author of On Intelligence, explained these perceptions in terms of pattern-matching in his 2009 J. Robert Oppenheimer Memorial Lecture:

“your perception of the world is … really a fabrication of your model of the world. You don’t really see light or sound. You perceive it because your model says this is how the world is, and those patterns invoke the model.”

If you want to get technical about it, beauty isn’t therefore “in the eye” as much as it’s “constructed by the brain” that’s connected to the eye. And according to Hawkins, and other neurologically-informed researchers, what we call beauty is culturally-dependent based on what patterns we’ve learned to match and label as beauty.

This seems to make a persuasive case against any notion of “objective” or “inherent” beauty.

I thought about this yesterday while I was walking from booth to booth at the market. The crowd was dispersed. Some booths had no customers at the time I walked by, while others held the attention of an interested couple or several individuals. 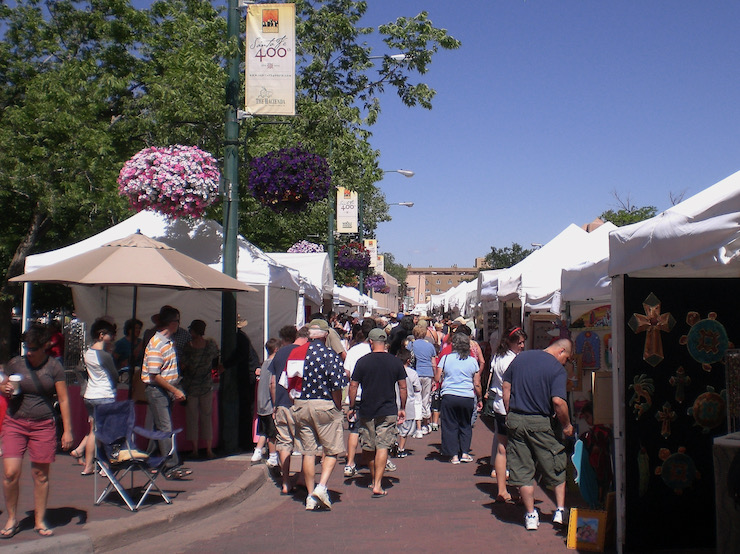 But no booth was overly crowded. No booth contained such beauty that it was disproportionately visited. That must mean, to my mind, that different people have different tastes about what pleases their own individually-learned aesthetic sensibility.

“Beauty is in the eye of the beholder” holds up well to this type of anecdotal observation.

I had another thought as I navigated my way through the Indian Market crowds yesterday. That ash tray I mentioned had a functional, as well as a decorative (taste aside) purpose. Most of the objects for sale by the Indian artisans were, at least at one time, inspired by a need for function rather than decoration.

Pottery is probably the most obvious example, but with adequate historical perspective one can make the case that jewelry, clothing, leather works, wood carving, and even painting all had roots in cultural necessity, rather than nicety.

This is especially true in the case of the native pueblo peoples in Northern New Mexico. In the fine KNME-produced documentary “Painting Taos,” Taos pueblo descendant Paula Rivera notes that:

I don’t want to make a judgment, other than to highlight the difference that Ms. Rivera is articulating. Inevitably, there must be implications when the motivation to produce “functional art” evolves from cultural necessity to economic necessity.

I think those differences and implications are worth pondering, by both the creators and the beholders of the beauty on display during Indian Market.