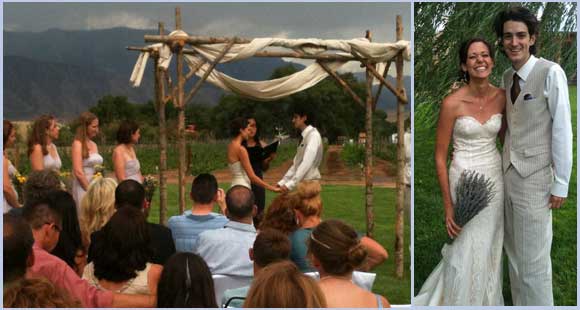 I met Marisa when she enrolled in my general semantics class at TCU (Texas Christian University in Fort Worth, TX) in January 2007. After she graduated that spring, she worked for me at a nonprofit organization I managed. She became friends with my daughter Stacy when they traveled to New York City later that year to represent the organization at a convention.

My daughter has visited me six times in my two years here, and three of those times we’ve gotten together with Marisa and Aaron, her boyfriend. The reason for Stacy’s most recent visit in mid-August was to attend Marisa’s and Aaron’s wedding.

I know Marisa better than I know Aaron, so my comments here apply more to her. But I believe I can generalize about “them” without too badly mischaracterizing Aaron.

Marisa and Aaron are different. What I mean by that is that they are each very much their own individual selves. More than almost anyone I’ve ever known, Marisa and Aaron are different from anybody else. In other words, there’s no one person in my 57 years of experience that I could say Marisa is “like” or comparable to. Marisa is like Marisa, nobody else. (Notwithstanding her celebrity-lookalike resemblance to Katie Holmes.) And the same with Aaron. (Without the notwithstanding qualifier.)

To my mind, they exemplify Emerson’s notion of individualism as expressed in “Self-Reliance”:

No law can be sacred to me but that of my nature. Good and bad are but names very readily transferable to that or this; the only right is what is after my constitution, the only wrong what is against it.

Thus it was no surprise to Stacy or me that — from their wedding announcement to the invitations to the ceremony to the reception to the honeymoon — Marisa and Aaron rightly pursued their own constitutions. It was as though their wedding planning premise was, “Bridal magazines? We don’t need no stinkin’ bridal magazines!”

Nor did they need any of the traditional matrimonial staples that have become de rigueur to the point of cliché. Solemnity was given the day off, which was just as well since they had an outdoor ceremony at a vineyard north of Albuquerque. First wedding I’ve been to with a wine bar available on your way in.

Cute kid ring bearers? Nope, but their two dogs were front and center. Formal wear? No coats, a few ties, a vest to distinguish the groom. Father of the bride “giving away” his daughter? No, he was seated with the rest of the family. Center aisle processional? The bride and groom strolled around the grounds visiting family and friends. With the clouds gathering ominously and thunder in the distance, the groom casually announced, “Hey, I think we’re ready to start.”

Aaron’s sister Katy officiated. The welcome, readings, and vows resulted from collaboration among the three of them. Knowing that Marisa is keenly aware of the significance of language because of her past work in general semantics and her current work with the Center for Nonviolent Communication, I expected the ceremony to be different in a meaningful way.

I was not disappointed.

Katy’s welcome established that this day was not a grandiose beginning fraught with before-and-after significance, but simply a public acknowledgment of a “bond that already existed.” She talked metaphorically about their relationship as though it were a sustainable farm, with references to sowing, reaping, yields, harvests, depletion, and nourishment.

In particular I was struck by a line in their vows in which they each committed to take care of themselves (diet, health, etc.) in order to contribute to a longer relationship with each other.

I liked that, especially in its contrast to the traditional line about “in sickness and in health.” To me, that standard line passively submits to an inevitability over which individuals have no control. As if fate, or chance, or luck, or fortune determines whether or not “Health Happens.”

Instead, Marisa and Aaron operationalized their commitment to each other by, in effect, declaring that they were going to take care of themselves for themselves, for each other, and for the longest possible sustainment of their relationship.

I’m happy for Marisa and Aaron. I’m not frivolously optimistic about the future, but it’s reassuring to see a young couple so courageously stick it to tradition. I don’t mean just during their wedding, but in their overall attitudes about living in a world that is so caught up in societal should’s.

I recall the sentiment attributed to Einstein:

It gives me great pleasure indeed to see the stubbornness of an incorrigible nonconformist warmly acclaimed.

So, warm acclaims all around for Marisa, Aaron, and the marriage their differences will make.