This was originally posted on my “From Here to Discernity” blog at SantaFe.com (submitted July 23, 2011).

I’m not proud to admit that I live on the computer. Every day, I create, modify, copy, move, and otherwise manipulate dozens, if not hundreds, of many different types of computer files.

It’s a storage, backup, and configuration management nightmare, given that my modest little network consists of 4 computers (3 PCs, 1 Mac), 5 external hard drives, and almost 7 TB (that’s terabytes) of storage. With just a few exceptions, I do my best to keep only the most recent version of any given file.

So I’ll typically “write over” an older version of a file with whatever the newest version is. I figure I don’t need to keep up with the progression of changes throughout a file’s history. I’m just interested in whatever the most current version is. This attitude works, from my point of view, when it comes to managing my own personal electronic files.

That attitude, however, doesn’t work in the real world of societies and cultures and histories. There’s a difference between abstract data files and the concrete real world. You can’t just “write over” the past with whatever the current condition, circumstance, or reality is.

Well, that’s not exactly right – we “write over” buildings and landscapes all the time. This notion has been integral to Santa Fe throughout its historical development, from the uncovering of ancient settlements deep below downtown to the erection, then demolition, of the Paolo Soleri amphitheater.

But somewhere, somehow, someone needs to document through words, images, and sounds what has come before now. We need to capture, retrieve, and remember the historical progression of different “versions” of buildings, events, scandals, celebrations, and people that have contributed to now.

One visible example of what I fear may be an in-progress historical “writing over” is the Cross of the Martyrs. Not the one you’re probably thinking of at the top of Hillside Park near the old Fort Marcy ruins. I’m talking about the original, 1920 version made of concrete, not steel.

In my short time in Santa Fe, I’ve been amazed at how few local residents know about the original Cross of the Martyrs situated just north of town, west of the Old Taos Highway off of Paseo de la Cuma. The concrete cross was dedicated in September 1920 during Fiesta. The original plaque is inscribed:

ERECTED BY MEMBERS OF
THE KNIGHTS OF COLUMBUS AND
THE HISTORICAL SOCIETY OF NEW MEXICO
IN MEMORY OF THE FRANCISCAN FRIARS
WHO WERE KILLED BY THE PUEBLO INDIANS
IN THE REVOLUTION IN THE
PROVINCE OF NEW MEXICO
AUGUST 9TH AND 10TH A.D. 1680 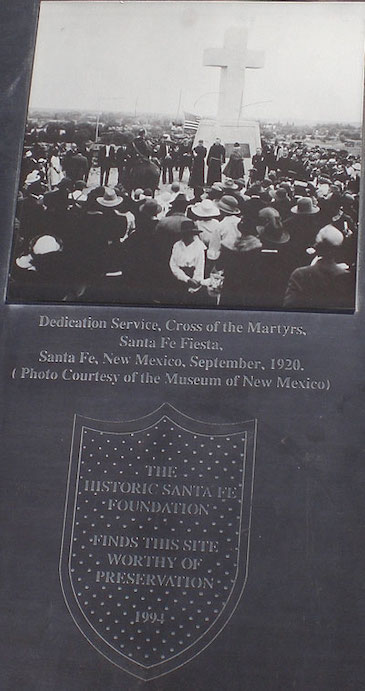 A free-standing plaque beside the cross explains that “The Historic Santa Fe Foundation Finds This Site Worthy of Preservation 1994.”

As if it takes a proclamation from a historical foundation to determine that a 74-year old, 25-foot tall concrete cross that’s 8 feet deep and weighs 76 tons, that watched prominently over Santa Fe from a perch that was then visible from anywhere in town, was “worthy of preservation.” Duh.

But “worthy of preservation” doesn’t mean “will be preserved.” In addition to being written over in memory, the original Cross of the Martyrs has almost been written over by development. The cross is accessible only from a winding dirt street by a narrow set of steps secured by railroad ties. Houses, driveways, privacy fences, and the dirt street encircle it. A visitor can only imagine what the view once was, thanks to a photo on the plaque.

I suspect it’s only a matter of time before one of the nearby property owners tires of having the deteriorating behemoth spoil what little view remains. A well-connected friend, a change to a preservation code, a donation for this or that … I can foresee any number of tactics that in a few years will probably render this 91-year old monument as “written off.” Literally.

Not that I’m all that sentimental about memorializing martyrs. I’m well aware of how controversial the history of this area is regarding the Spanish conquest and the Pueblo Revolt. Or I should say, I’m aware that the commemoration of those historical events remains controversial, as evidenced by the vandalism of the 1977 version of the Cross of the Martyrs prior to the opening of the 2010 Indian Market.

But that’s for a different post. I just wanted to write down a few thoughts about something before it’s written off. And carted away, for the sake of a better view. 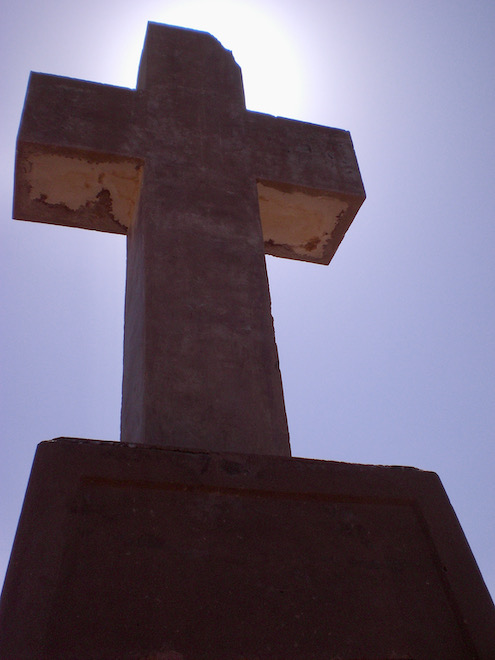