(Originally posted to my “From Here to Discernity” blog at SantaFe.com, September 12, 2011)

Two decades ago, I took a “self-improvement” seminar in Dallas. The seminar leader, an out-of-towner, commented in the beginning that, “I’ve heard Dallas is all about looking good.”

I recalled that observation last week while I was reading about the year-long drought in central Texas. A New York Times article by Manny Fernandez chronicled the dire situation in Llano, Texas, ninety miles northwest of Austin.

An aspect of the water shortage that Fernandez focused on was its effect on lawns and landscaping. The city council enacted restrictions that prohibit watering lawns except for one day a week. As a result, most lawns are distressed, at best, and many have withered away to weeds.

Those homeowners fortunate enough to have private water wells are not subject to the restrictions. In order to preempt the ire of neighbors, those well-watered green lawn owners have been compelled to post signs in their yard indicating WELL WATER was used.

The State Farm Insurance agent in Llano didn’t have a well to water his business landscape, but it was green anyway. How? The article explained that the insurance agent asked his landscaper to apply a green dye to his parched yellow lawn. At least it looked like green grass.

One of the things I appreciate most about Santa Fe and northern New Mexico is that the people who have settled here throughout history have adapted to its geography and climate. For the most part, they haven’t attempted to create an artificial environment (like some cities in Arizona I could mention).

To a Santa Fean, the thought of painting a lawn makes about as much sense as painting dirt. Which, of course, is the primary palette of most landscapes here. Nothing about northern New Mexico is amenable to lawn grass, so most people have yielded to practicality and turned to more native landscaping solutions. Or none at all — nature au naturel, so to speak.

However, Santa Fe does have something of an obsession about the appearance of things built on the landscape. 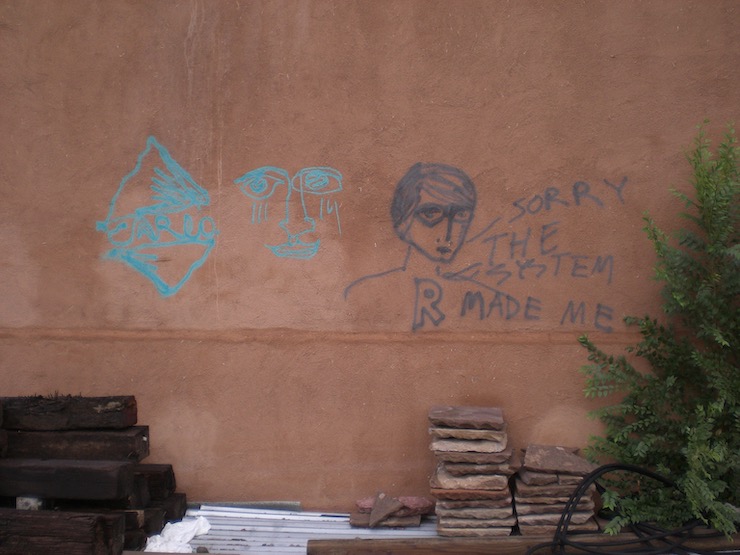 On the same day I read about drought in Llano, Texas, I read that vandals tagged the backside of the Garfield Building at the corner of Sandoval and Garfield. The owner of the building told the Santa Fe New Mexican that dealing with spray paint on this building was difficult.

He explained: “The stucco is not like the stucco sprayed on many fake adobe buildings, because it includes straw to mimic traditional plasters used for centuries on Santa Fe houses.”

The implication in the owner’s explanation is that when it comes to falsifying architectural appearances in Santa Fe, there’s a hierarchy.

On the low end, there’s “stucco sprayed on fake adobe buildings.” Moving on up the ladder of presumed acceptability is the addition of “straw to mimic traditional plasters.”

Both processes mean to achieve the same end of providing an artificial façade to give the appearance of authenticity.

Having called Santa Fe home for 32 months now, I realize this topic is touchy, or even untouchable, for most. So I’ll criticize another city to illustrate my objection to this type of aesthetically-stunted mindset.

Last fall I spent a weekend in Alexandria, Virginia. Strolling along the streets of Old Town on the west bank of the Potomac River, I gazed in appreciation at the 18th-century houses and buildings. I tried to imagine what it would’ve been like here during the Revolutionary period, the Civil War, the early 20th century.

At one point I walked past a block-long building of apartments and found myself confused. Was this an original period building, or was it new? A realtor’s sign at the corner answered my question. It was a new building of condominiums, still offering attractive financing, according to the sign.

I felt put out. My appreciation of the authentic buildings was challenged because of all the visual noise created by the artificial “made-to-look-like” new buildings. The new look-like designs didn’t pay homage to the originals. No, they attempted to expropriate the authenticity of the originals to give their knock-off façades some street-view historical credibility.

Doesn’t our 54-year old Santa Fe Historical Zoning Ordinance promote this same mandate to “honor” the past by visually obscuring it with look-like architectural fakery and mimicry?

If someone sells a watch or a handbag on Canal Street in lower Manhattan that artificially appears to be authentic, he’s illegally selling knockoff merchandise.

If someone designs a building in Santa Fe that artificially appears to be authentic, he’s legally complying with a city ordinance.

Not really, when it comes to an adherence to appearance. 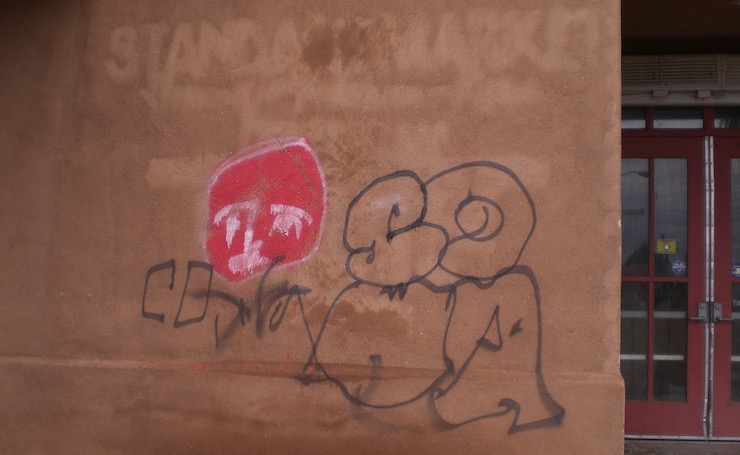