An obscure monument south of downtown Fort Worth recalls a progenitor of the Stock Show and the tragedy that occurred there.

The 2008 Fort Worth Stock Show and Rodeo concludes tomorrow. Since its inception in 1896, the show has grown to world-class proportions, attracting almost a million visitors each year and pumping an estimated $100 million into the Fort Worth-area economy.

The “Texas Fat Stock Show,” as it was called back in the day, wasn’t the first attempt to promote the town along the Trinity. Years before, the seeds for what would become a spectacular civic success were sown in calamity and tragedy.

Until 1889, there wasn’t much reason for anybody outside of the county, much less the state, to take notice of Fort Worth. That all changed in May 1889, with the opening of the Texas Spring Palace, the “Pride and Glory of Texas.”

According to the Texas State Historical Association, the Spring Palace “served as an educational, cultural, and entertainment center for Texas residents and guests throughout the month.” Covering a full city block just south of the original Texas & Pacific Station, promoters showcased all of Texas’ goods in an attempt to lure investors, businesses and immigrants to the area.

The dark-green, three-story exterior featured “turnip-shaped cupolas and a massive center dome surpassed in size only by that of the national Capitol in Washington.” It “looked like something out of a fantasy world.”

The New York Times referred to the edifice as “a temple of products of Texas,” with interiors that were “beautiful beyond description,” and “handsomely arranged” grounds with “walks and a great variety of beautiful shrubbery.”

Despite suffering a financial loss, organizers heavily promoted a second season beginning May 10, 1890. Thousands attended each day, culminating with an extravagant ball “under the auspices of the Cotillion Club” on May 30.

A festive crowd of 7,000 packed the ballroom that Friday night, including a thousand guests from Dallas who arrived via a train scheduled for the occasion.

About 10:25 p.m, witnesses reported a small blaze on one of the balconies. Within minutes, the entire building — built of wood and filled with dry, combustible, Texas-made products — was consumed by fire. Miraculously, only a few dozen people were injured.

There was one fatality. According to the Fort Worth Daily Gazette:

“The saddest incident of the fire was the death of Mr. Al S. Hayne, who gave up his life that others might be saved. He had left the building, but returned to help out the women and children, and nobly did he do it. As long as men could stay in and live he stayed, and while great flakes of burning grass and moss were falling on his body, setting fire to his clothes, he stayed there, handing out women and children to those on the outside; and it was not until he was literally burning alive that he abandoned his post, and then all had been saved.”
Three years later, the Woman’s Humane Association erected a monument to memorialize the 40-year-old Hayne (pronounced Hay-nie), a British engineer who had come to Fort Worth 10 years before his death.

For 115 years, the Hayne Memorial has survived, precariously positioned inside the narrow triangle formed by the awkward intersections of Lancaster Avenue, Main Street and Houston Street. It survived the fire that destroyed the first T&P Station in 1904. It survived vandals who stole Hayne’s original marble bust in 1922, replaced by a bronze replica in 1934. It survived more than three decades under the suffocating Interstate 30 overhead.

And now it has even outlasted the treacherous traffic triangle that warded off those who might wish to pay their respects. Recognizing the historical significance of Hayne and the palace, city leaders used the Lancaster Avenue redevelopment project to eliminate one side of the traffic triangle. With the rerouting of Houston, the Hayne Memorial can be safely accessed from new walkways along the south side of Lancaster.

A visitor might wonder why Al faces west down Lancaster rather than north toward the courthouse, or east toward his native London, or south to the site of his heroic sacrifice.

A romantic might speculate that it’s so he can offer a protective watch over the fruits of his heroism, crowded along the distant Stock Show midway each year.

For more information on the Spring Palace and Al Hayne:

www.rootsweb.com/~txtarran/
Steve Stockdale teaches as an adjunct faculty member in the Schieffer School of Journalism at Texas Christian University. He is a member of the Star-Telegram community columnist panel. 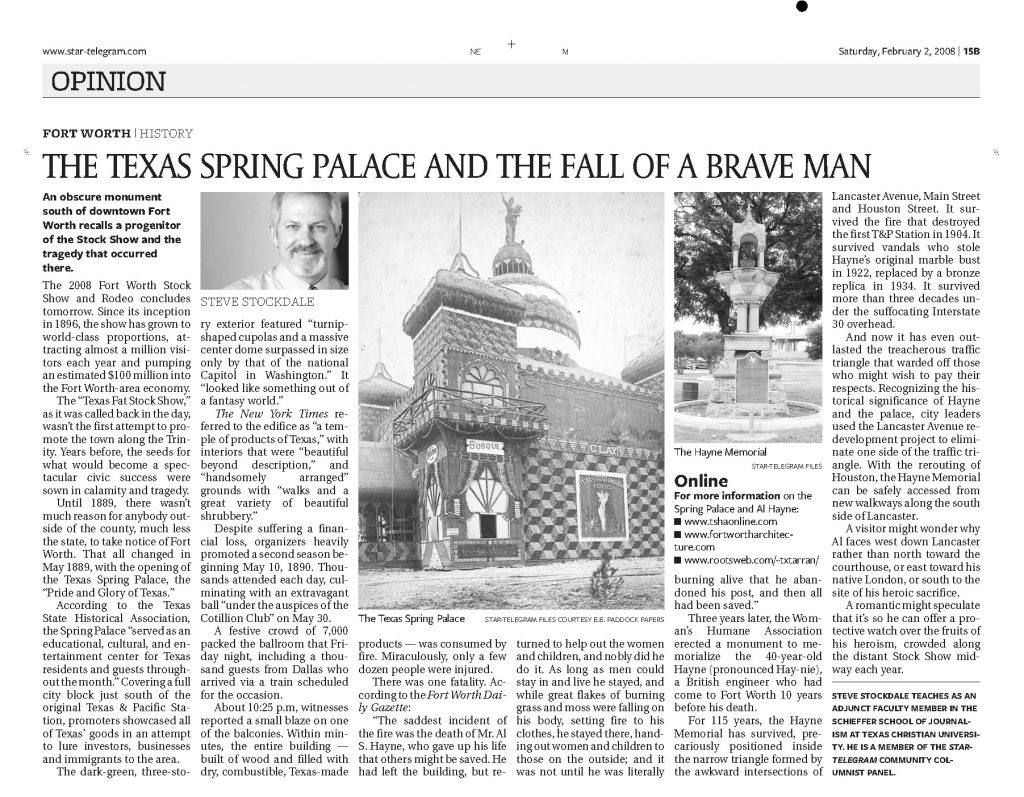