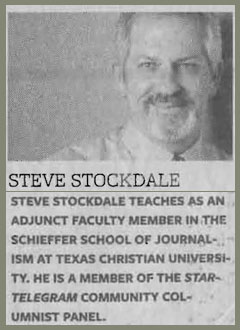 Every three decades or so, there’s a federal case over broadcasting bad language. The most recent was on Election Day before the Supreme Court.

This is like one of those cartoon caption contests.

You know, like there’s this completely frazzled fish lying on a psychiatrist’s couch, distraught eyes fixed to the ceiling. And the super-serious but disinterested shrink sits across the room, pretending to listen . . . as he reads Field and Stream.

Or picture this: a super-serious attorney passionately pleads his case before nine ceremonially clad justices of the U.S. Supreme Court. One of the feeble old judges peers down over his bifocals to the attorney and asks, “But what if the indecent remark was really hilarious, very, very funny?”

One of those scenarios actually played out in real life last week. Can you guess which one?

Go back to last year for a minute. The Supreme Court heard a case in which it was asked to interpret what the Second Amendment to the Constitution really means.

Apparently, after almost 220 years, somebody actually read the thing: “A well-regulated militia, being necessary to the security of a free state, the right of the people to keep and bear arms, shall not be infringed.”

Does the right to keep and bear arms apply to well-regulated militias, or to the people?

Duh! By a resounding 5-4 majority, the Supremes interpreted the Second Amendment to mean that the people have the right to keep and bear arms. The reference to “well-regulated militia” was, basically, a red herring since everybody knows that all the militias were de-regulated years ago. (I think it was after the airlines, probably before the telephone companies.)

So this year along comes the Federal Communications Commission to appear before the Supreme Court to argue about “patently offensive” material and the First Amendment.

Apparently, every 30 years the FCC has to make a federal case out of bad words. In 1978, it trucked up to the Supreme Court to hammer a radio station that played George Carlin’s classic audio lecture on “filthy words.”

Come on, people! How many times do these constitutional amendments have to be “interpreted”? The Constitution says what it says, it means what it means and that’s that.

But anyway, last week’s trip to see the Supremes was necessary because the FCC had previously lost its case in the lower level federal appeals court.

What was at stake was the FCC’s authority to levy multimillion-dollar fines against broadcasters for allowing even “fleeting expletives” to be broadcast over the public airwaves.

Over the past few years, the FCC has flip-flopped all over itself in its punitive decisions.

In January 2003, during a live televised broadcast, U2’s Bono accepted a Golden Globe award by saying, “This is really, really f—ing brilliant.”

In response to formal complaints, the FCC ruled “no harm, no foul” on this fleeting use of the word as an adjective.

But a year later, Janet Jackson exposed her, you know, during the Super Bowl XXXVIII halftime show.

A shocked — shocked! — nation demanded that this outrageous 1.5 seconds of filth be condemned and punished.

That little piece of anatomy was a game-changer for the politically responsive FCC.

Bono’s no-no was back in play.

All words-denoted-by-their-first-letters became fair game for FCC fines, regardless of tense, form or usage; gerunds were just as guilty as nouns.

But then just 10 months after Janet Jackson’s 1.5 seconds of fame, the FCC took no action against ABC Television after it broadcast, unedited, Steven Spielberg’s epic Saving Private Ryan. Even though, I’m told, that film unapologetically, and apparently ungratuitously, uses the f-bomb 21 times.

So on the same day that 120 million Americans found something better to do with their time, the highest court in the land talked about dirty words using pre-pubescent euphemisms and words-denoted-by-their-first-letters.

They couldn’t even bring themselves to say the words that were actually in contention.

And you can’t read them or hear them in any “respectable” media outlet.

I kid you not.

Steve Stockdale of Fort Worth is a member of the Star-Telegram community columnist panel.
© 2008 Star-Telegram and wire service sources. All Rights Reserved. http://www.star-telegram.com

Note: in the original print edition (image below), the headline was “Actually, the Constitution is pretty clear on things.” I objected to the editor afterwards and the headline on the online version was changed to title of this post, which I thought was significantly better. 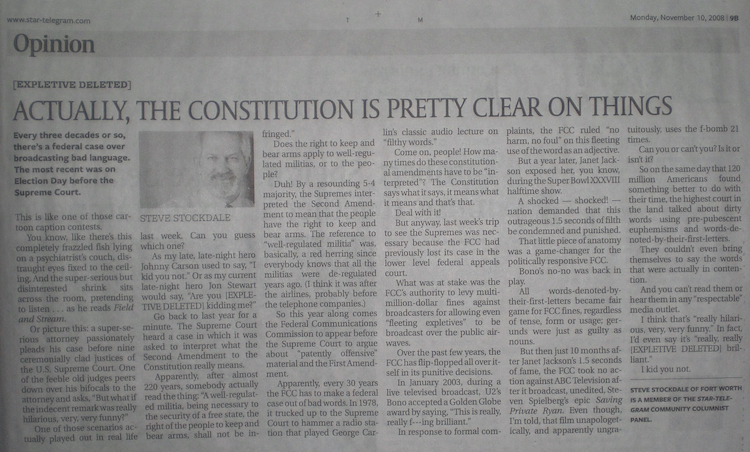