I just tried to drive in to work. But as I pulled into the parking lot, I was overcome with such emotions that I turned around and came home, realizing that I needed to verbalize something.

This weekend I went to San Jose for the wedding of my good friends Liz and Denny. I’ve known Liz since 1983, and worked closely with her during the late ’80s. She served as friend and confidant during my separation/divorce transition, and she was the one who worked on me for a year before I relented to ‘do’ the Forum seminar. I believe I can safely say that, five years later, that experience in December 1992 spawned my life as I now know it, and don’t know it – my circle of friends, my approach to living, my passions – including general-semantics. Etc. I just met Denny less than two years ago, but nevertheless we’ve shared moments as well; last January I visited with him in California on a business trip during the beginning of the end of my brief engagement. He provided a much-needed ear and offered pertinent advice from his own experiences. So as I headed out Friday afternoon, the portent of the weekend lay unstated, but anticipated.

A typewritten article, on faded red construction paper, sits tacked on my bulletin board in front of me. I typed it myself in 1972, after running across it in a magazine. The title – “I’d Pick More Daisies”, with no attributed author. The short, half-page essay began, “If I had my life to live over again, I’d….” Well, let me just share it with you as I read it again: 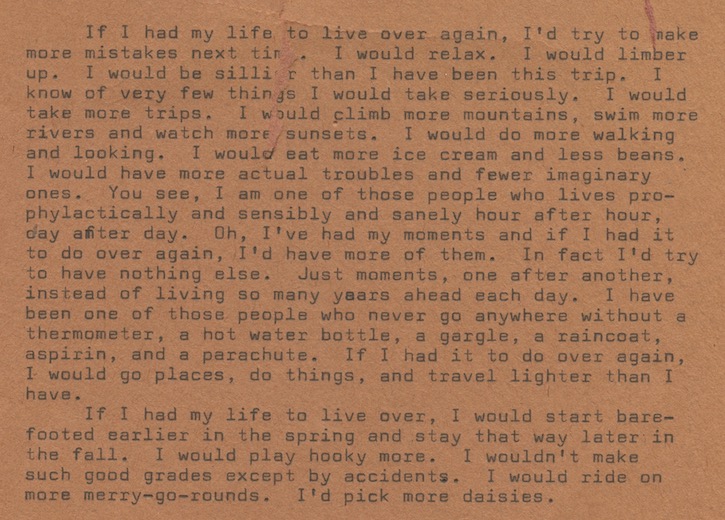 To some degree, especially in the past five years, I’ve applied this wisdom – I’ve had my share of moments. But I must have missed many past opportunities for moments, and I must want more in the future, because I cannot read over this again without tearing.

Saturday morning I had a moment. My new stepbrother David and his girlfriend Cicely live in the Bay area, as does my good gs bud Scott who works at the Coro center in San Francisco. I drove into San Francisco on a picture-postcard morning – clear, blue sky; warm sunshine with a crisp breeze, windows rolled down, and Billy Joel singing through the tape player:

While driving, and feeling the wind, hearing the music, screaming out loud the words, drumming on the steering wheel….I had such an epiphany… a high…an impossible-to-verbalize moment of “self-actualization” (Maslow), of “flow” (Csikzentmihaly)…that LIFE IS GOOD! (Miller).

My skin crawled. I felt…ALIVE!

While waiting for David and Cicely near Union Square, I sat at a curbside table near the hotel, and watched the people passing. I overheard two bellhops talking about a Halloween party one attended the night before. He described the best costume – a Marv Albert: a guy with a bad black wig carrying a microphone and wearing a headset, attired in business suit above the waist, black fishnet stockings and high heels below, with a straight man sidekick who would periodically yell, “Hey, Marv, how ’bout a 3-way?” To which ‘Marv’ would respond into the microphone with his trademark “YEEESSSSSSS!”

A terrifically enjoyable sidewalk coffee with David and Cicely. An abbreviated, but still meaningful reunion with Scott and two other Coro trainers. A more harried drive back to Mountain View to get ready for the wedding. The wedding, held at Ralston Hall on the campus of the College of Notre Dame in Belmont, formerly the “country showplace of William Chapman Ralston, founder of the Bank of California.” Put simply, after this wedding, there’s no need for me to attend another. (Except, of course, for Stacy’s.)

At my age, singles at weddings stand out like a red wine stain on a white tablecloth. I was placed at a table next to Liz’s single friend Joan from Philadelphia — I’m certain with malice-aforethought on Liz’s part. Overcoming, or perhaps yielding to, the obvious, we connected, due to a common interest (Myers-Briggs personality typing: we’re both N’s) and a common experience (the Forum) and a common link (Liz). Coincidentally, she and I will both be in New York City next weekend and we’ve made plans to get together. [Well, I, the ‘J’, tried to make plans; she, the ‘P’, resisted and wants to just wait and play it by ear; so we decided that we have a plan, and the plan is to make the plan later in the week.]

Yesterday morning I got to meet Pete from the gs-lumina listserv. He drove down to Mountain View and we shared a two-hour gs discussion over Starbucks. He said two things which I particularly noted: the notion of “humility” as an aspect of a scientific, or sane, approach or orientation, related to tentatively holding your premises, beliefs, judgments, etc; and the notion of attempting to achieve “complete adequacy”, which, as I contemplate it more and more, seems part and parcel to moments of self-actualization. Coincidentally, Pete studied under Maslow at Brandeis.

Flew in late last night, gradually decompressing from the go-go-go weekend. This morning I dragged myself out of bed and got ready for work. Before walking out I put on Billy Joel’s “All About Soul”, to put a bounce in my step, to reinvigorate me to re-enter my ‘normal’ life, to vicariously re-live that moment from Saturday morning.

And a strange thing happened.

The ‘same’ song which contributed to that moment Saturday morning triggered something entirely different on Monday morning. It triggered tears, and a release, and another moment of a different realization:

And she smiles because it’s understood
There are no words to say.

The ‘moments’ occur without words. The ‘moments’ come because we bring them, we make them, we manufacture them, many times without intent or purpose or effort. But we prepare ourselves for them, and we put ourselves in positions from which ‘moments’ germinate. And we also avoid putting ourselves in these positions; we avoid the risks and uncertainties which fertilize the seeds of ‘moments’. We talk about these ‘moments’ and sometimes have what we believe to be ‘moments’ as we talk about, or think about, or imagine ‘moments’ to come, or remember ‘moments’ of the past. But these artificial, inorganic ‘moments’ pale in comparison, and preclude our experiencing ‘moments’now. And now. And now. Etc.

(I hope you can overlook the explicit metaphysical imperative.)

I sense a new way to describe what general-semantics is ‘about’ as a result of these ‘moments’: for me, it provides a framework and a method for discovering and analyzing and increasing our ability to continually practice awareness of ourselves and our behaviors and evaluations, such that we tend to better cultivate these gardens of ‘moments’ which surround us, yet which, for the most part, we are oblivious to.

Stuff on this Site

Scroll back to top