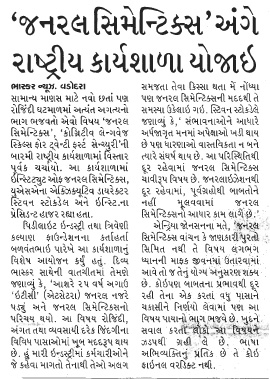 As printed in the 6 November 2007 edition of DIVYA BHASKAR DAILY, Gujarat, India.

General Semantics is a topic somewhat unfamiliar to the common man, but it concerns something that plays a very significant role in our daily life. The twelfth National Workshop of the Forum for Contemporary Theory, titled “Cognitive Language Skills for Twenty First Century,” discussed extensively details of General Semantics.

This distinguished National Workshop was planned and organized by Mr. Balvant K. Parekh, Chairman of the Pidilite Industries, India, and President of the Triveni Kalyan Foundation. Speaking to Divya Bhaskar, Mr Balvant Parekh said that he had first read about General Semantics, some twenty-five years back, in the journal, ETC: A Review of General Semantics.

General Semantics, Mr. Balvant Parekh said, has been useful to him in every aspect of life, personal, social and professional. “In my professional work within my industry, I had noticed that my employees would, at times, understand what I had told them quite differently from what I intended to convey. General Semantics was useful at such times in solving problems of communication.”

Mr. Steven Stockdale, Executive Director of the Institute of General Semantics, told Divya Bhaskar that General Semantics is of key importance in our keeping away from the conflicts, which result from unfulfilled expectations of our subconscious arising out of multiple possibilities before it. General Semantics enables us to keep away from generalizations and to avoid evaluating situations through prejudices.”

Talking to Divya Bhaskar, Ms. Andrea Johnson, President, said, “General Semantics is not limited strictly to academic reading and information. Only when it is assimilated into life through meditative processes, could it be put into action. General Semantics enables us to avoid coming under undue influence of any single factor and to examine all the different aspects of a situation in order to reach a proper conclusion. People who can question themselves are more readily able to grasp this subject. They are then able to understand that language is a symbolic expression, not a final verdict.”