Our flight from DFW to LaGuardia was oversold, so they asked for volunteers to take a flight an hour later in exchange for $200 vouchers. After discussing it with Stacy, we put our names on the volunteer list. We didn’t have to get bumped, but the gate agent took care of us for volunteering and upgraded us to 1st Class …  instead of being in the next-to-last row, we moved up to the first! Stacy enjoyed all the service and couldn’t believe the difference in food service … especially the brownie fudge sundae.

Arrived at New York LaGuardia on time and after a few minutes of confusion found our car we had reserved, a Lincoln limo, with female Polish immigrant driver. Got caught up in some bad traffic going into the Mid-town Tunnel, but made it to Jim’s on W.22nd in about an hour. 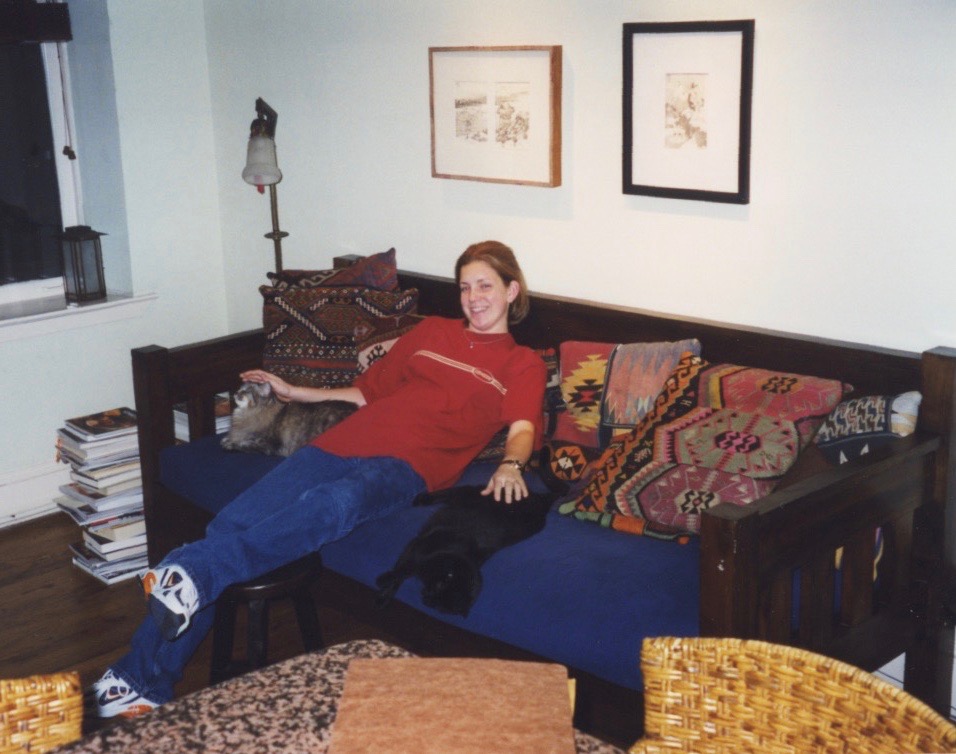 First thing after unpacking we walked about three blocks to this huge sports and entertainment complex called Chelsea Piers on the Hudson River. We went to their multi-level driving range and range balls into a big net extending out into the river, looking across to New Jersey, off of the second level with automatic ball feeder … it was pretty cool, but 67 balls cost us $20. 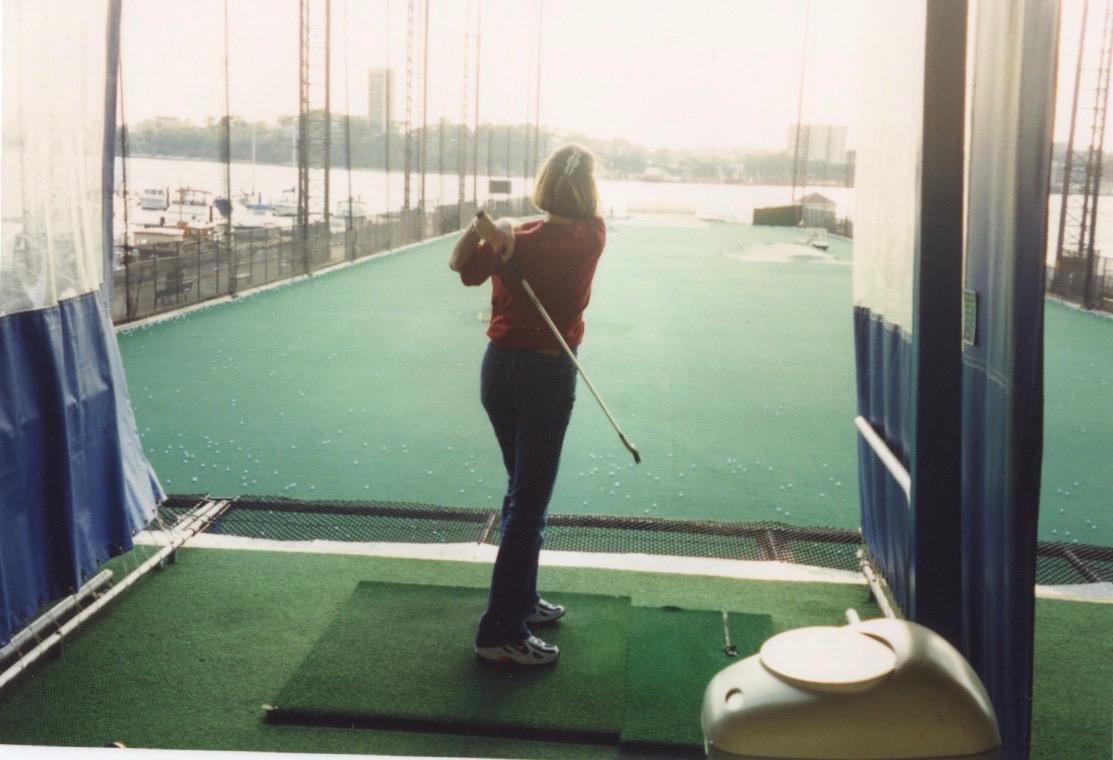 Cleaned up and took a cab to Times Square, walked around, saw where MTV studios are, and ate at the Official All-Star Cafe, a huge sports-themed place fronted by Wayne Gretzky, Monica Seles, Joe Montana, Ken Griffey, Jr., Shaq, Andre Agassi, and Tiger Woods. Pretty cool place for watching sports … they had I don’t know how many 10′ wide screens lining the upper rim of the place … maybe 20-25 all around. We walked off dinner on the way home, walking from Times Square (42nd and Broadway) to W. 22nd and Ninth Ave, passing by Madison Square Garden and down through Penn Station to prove to Stacy that there was actually a train station *below* M.S.G. 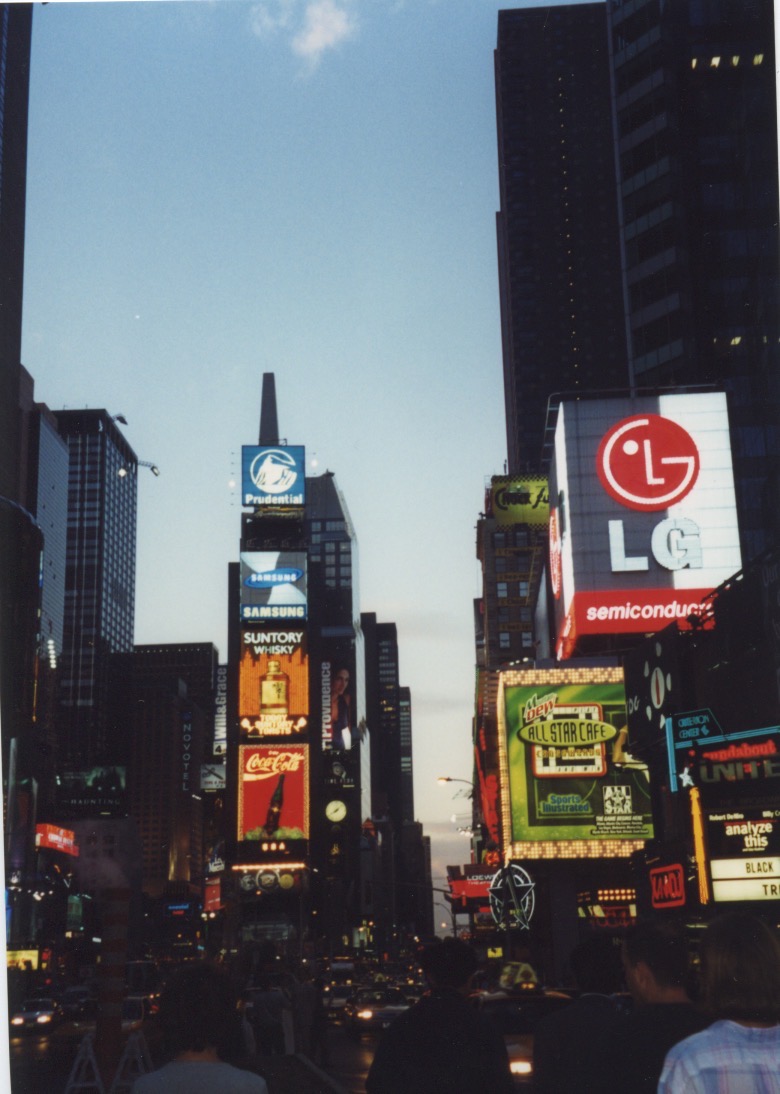 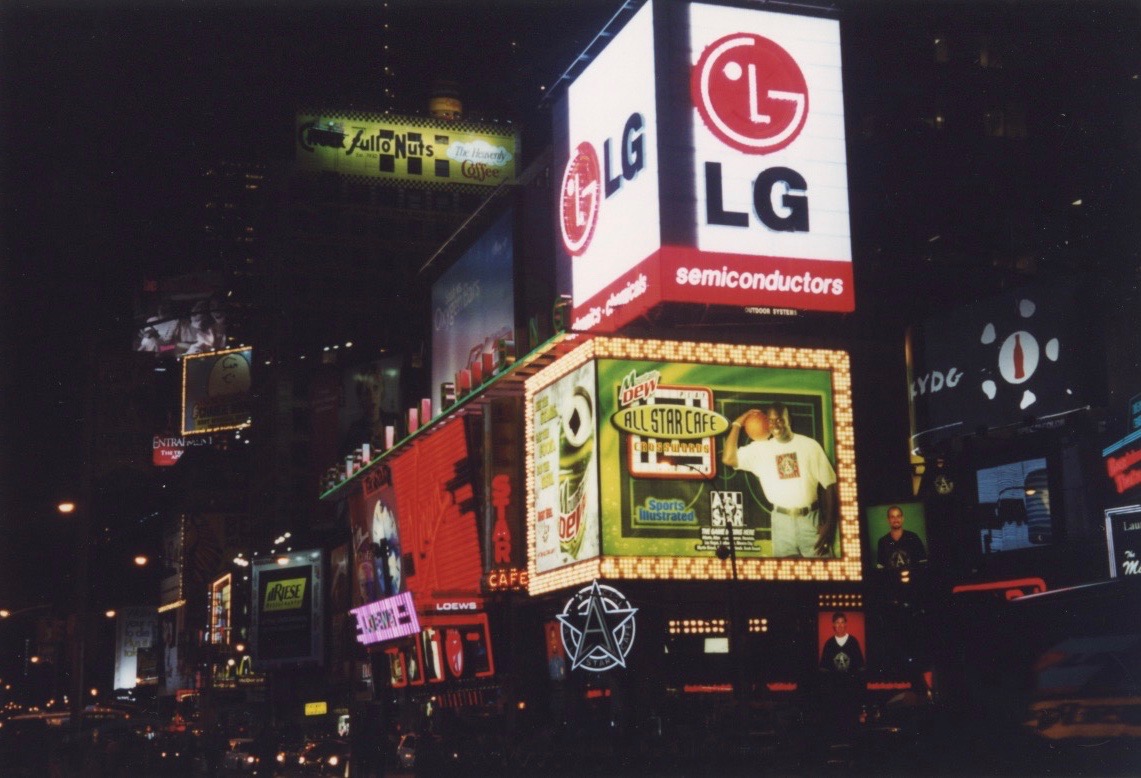 Friday, May 28th
We met two friends of mine from the Institute of General Semantics (Marjorie and George) for breakfast at the Empire Diner, right around the corner. Then they drove us down to Battery Park, through Greenwich Village, SoHo, past the World Trade Center. We took the ferry over to Liberty Island where the Statue of Liberty is. Very impressive, but we had to wait in about a 30-minute line to get on the ferry at both places, and almost sunburned. (The weather was perfect – clear/high clouds, dry, mid-80s.) We decided not to get off at Ellis Island because we saw the lines were long there to get back on, so we returned to Battery Park. 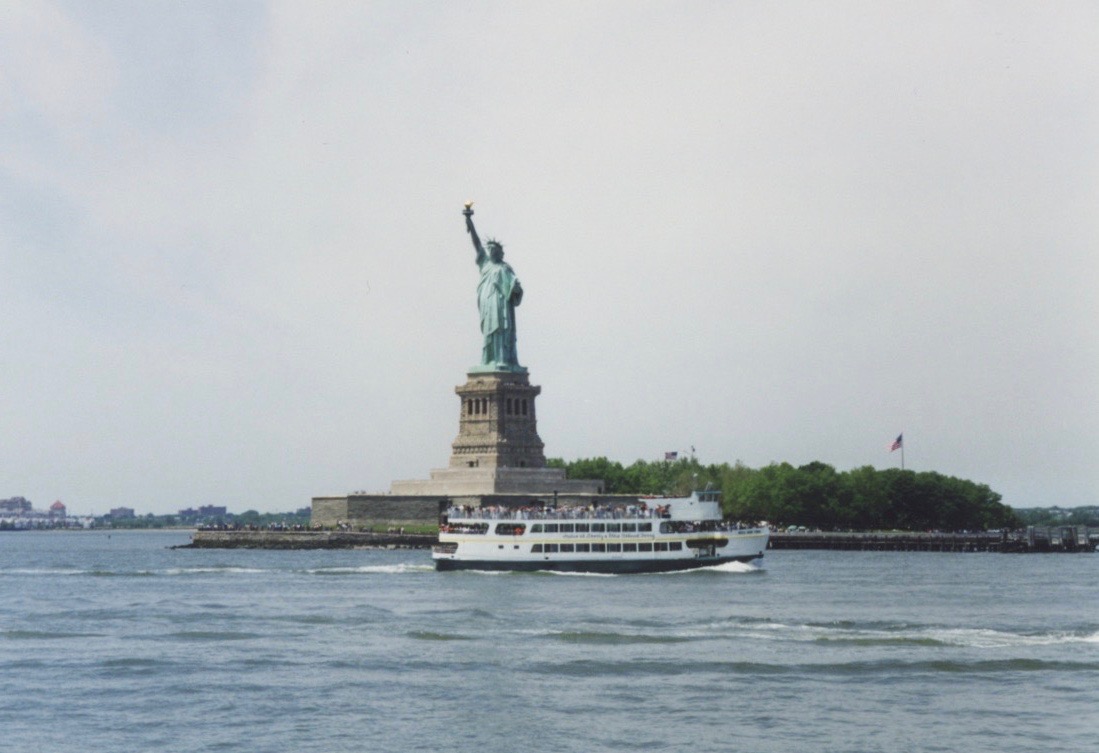 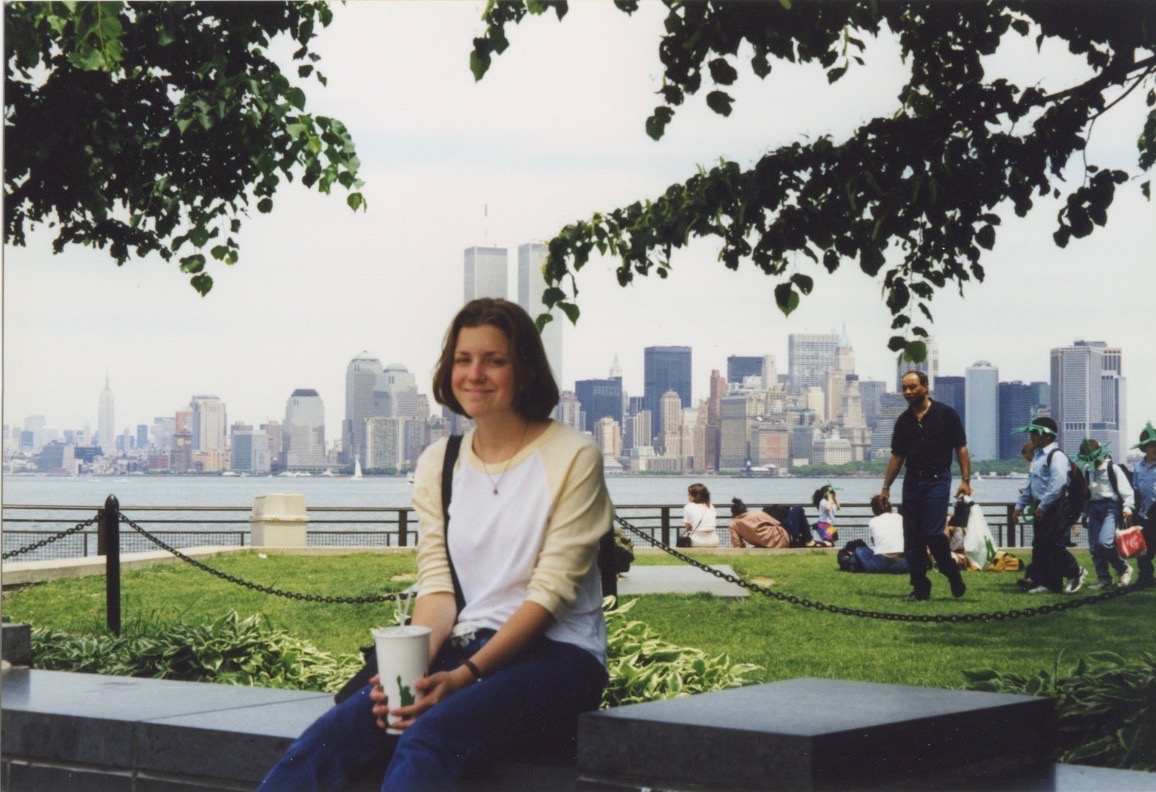 Walked around Wall St., ate a slice of ‘real’ NY pizza at a small restaurant, walked past Trinity Church and cemetery and saw a headstone dated 1705. Found the subway station and rode it back uptown Jim’s, then napped. 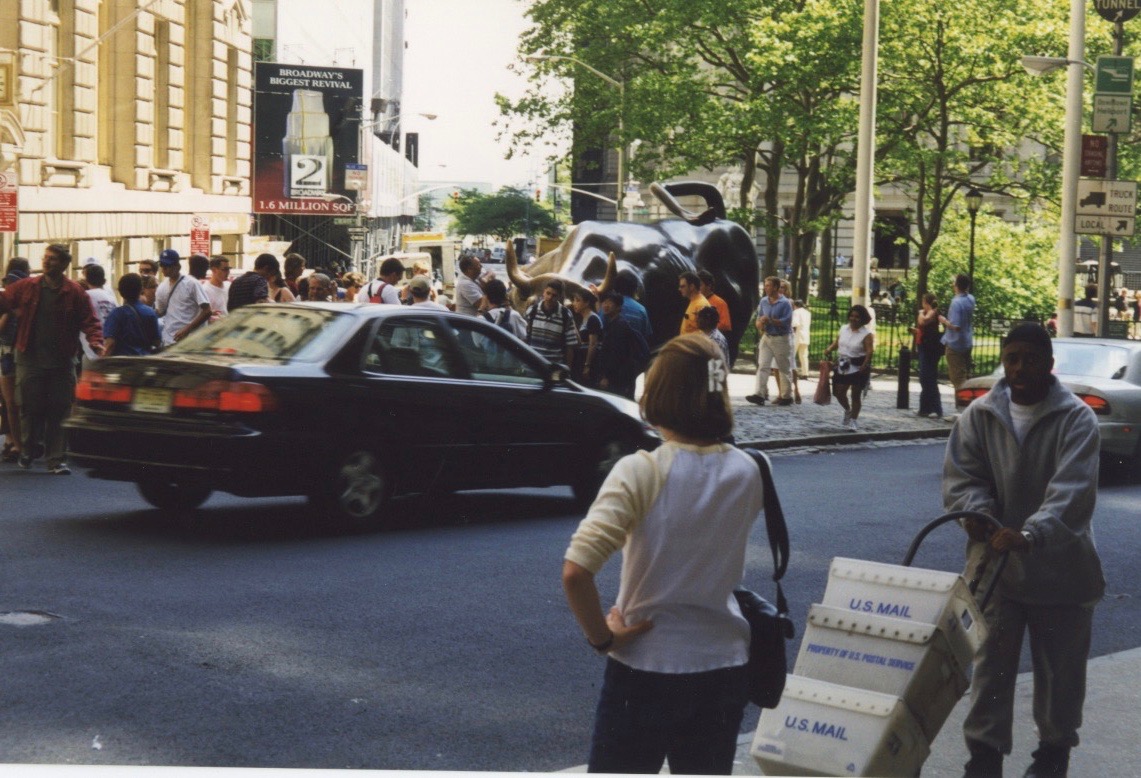 Left about 7 for the Empire St. Bldg so we were up there near sunset, which was beautiful, but the observation level was pretty crowded and Stacy was still feeling the after-effects of her nap and wasn’t really into looking down 1,000 feet – 86 floors. Took the subway from Times Square to Central Park South and got out right across the street from Carnegie Hall and a block away from Hard Rock Cafe and Planet Hollywood, right at the southeast corner of Central Park, saw a handsome cab (horse-drawn carriage). After a long wait, we got into Hard Rock Cafe and had a good meal, then hopped the subway home. 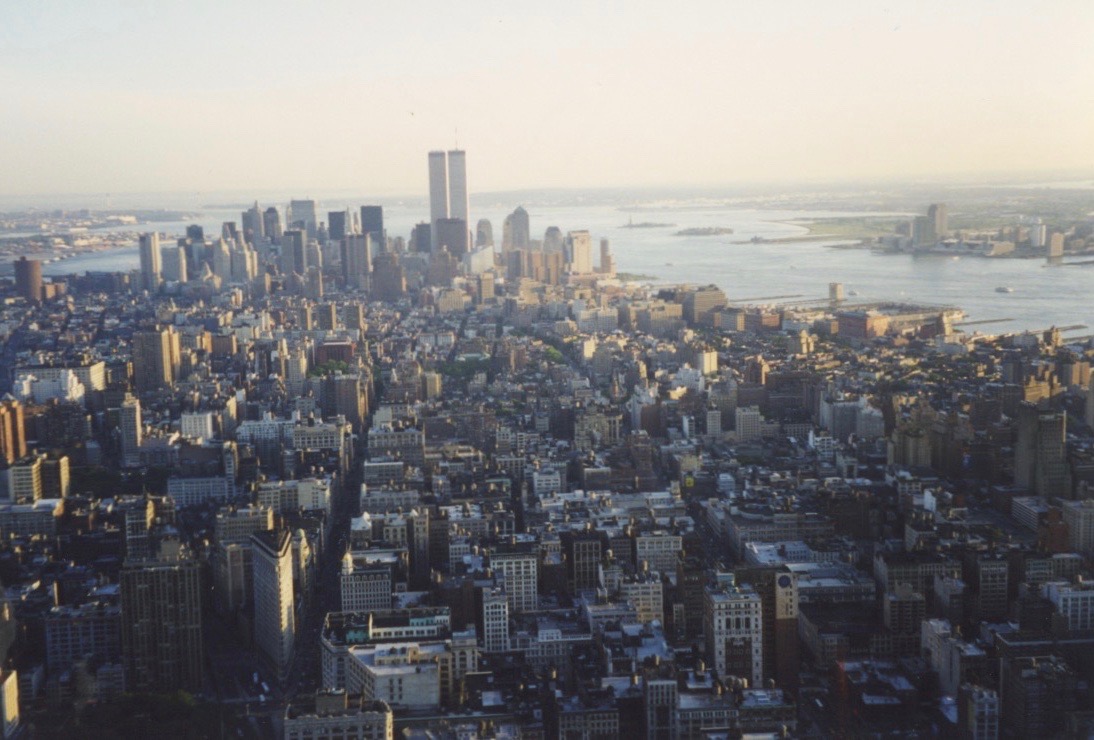 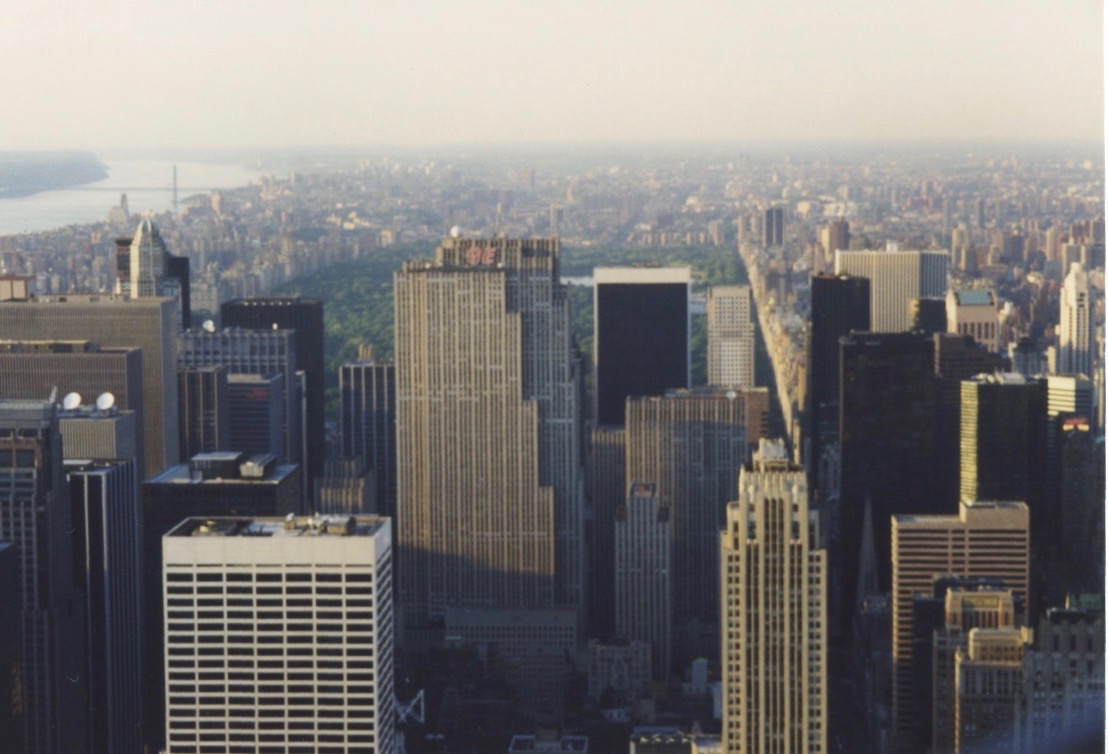 Saturday, May 29th
Let Stacy sleep in, then walked to Greenwich Village. Stopped at Union Square and had breakfast/lunch on the sidewalk at the Coffee Shop on Union Square, across the street from the square and a big Saturday morning farmers’ market. Very interesting people-watching. (Actually, I’d like to think that we were two of the interesting people watching. <g>) After my first/last experience with Brazilian pancakes with passion fruit syrup, we walked on down to Washington Square, which was filled with people on a gorgeous afternoon. On one side of the square different street (park?)  performers were waiting in queue for a chance to do their thing and pass their hat. On the other side, an older guy who was obviously in his own galaxy sang show tunes accompanied by a small tinny boom box. What a great example of “melting pot”, with all different kinds of people! (Some of the ‘pot’ wasn’t ‘melting’, if you get my drift…) 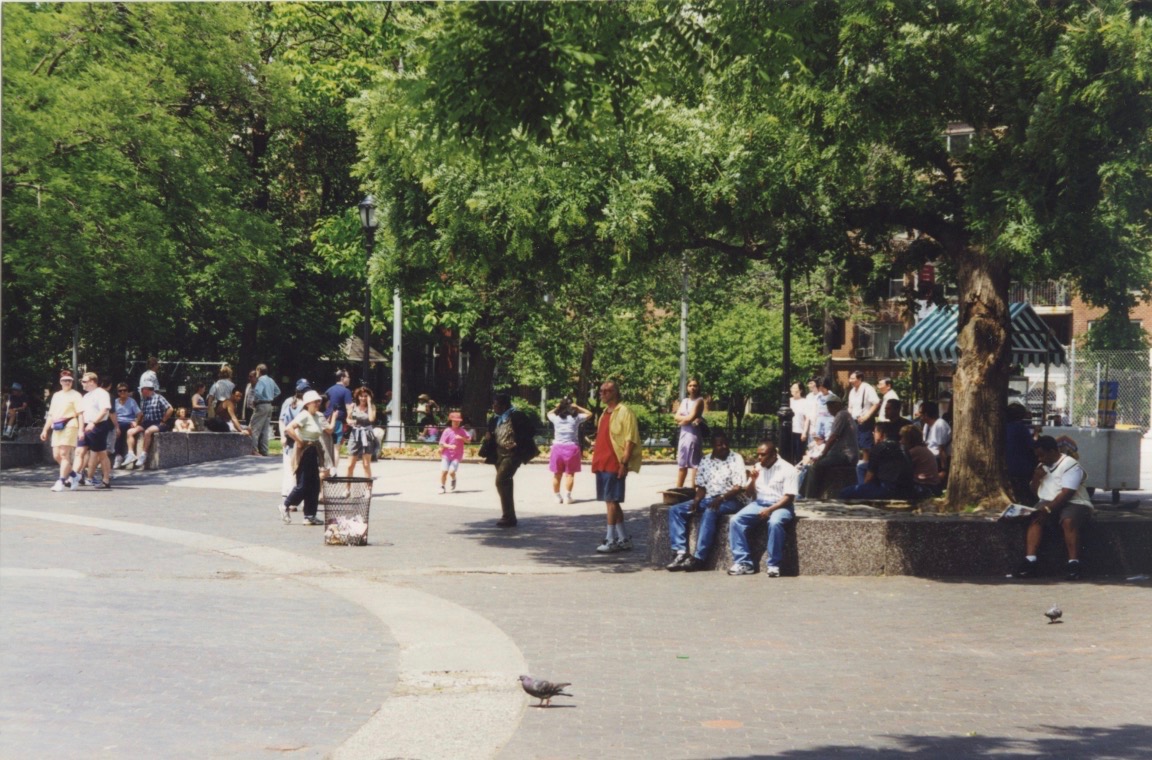 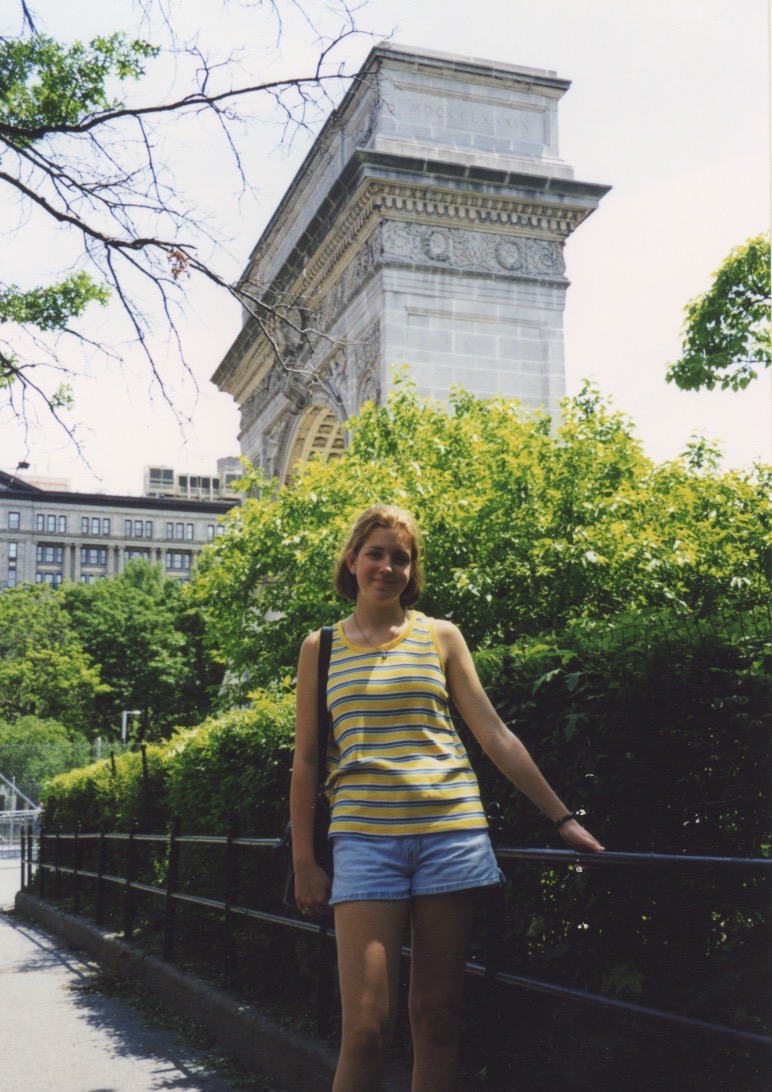 Stacy made an observation about how the people “didn’t seem to care” what other people were doing, or dressed like, or which language they spoke, and we talked about how nobody stood out as ‘different’ because there wasn’t really a dominant ‘sameness’. Stacy commented about how it was kinda like the people ‘cared’ by ‘not caring’, in that they were so tolerant of everyone. We got a pretty good feel for the diversity of both the natives and the tour-i (haven’t used that plural form of “tourist” since the Academy).

Feeling the effects of the hot weather (but dry and generally comfortable) and the trip, we subway’ed back to Jim’s and rested by watching the second “Star Wars” on video. (Let’s see, the second one, that would be Episode V … Stacy wants to catch up and see the three previous ones before going to the new one.) Then we got dressed, walked out at 7:25 to the subway station two blocks away, caught the train uptown to 42nd St., walked two blocks to the Nederlander Theater, and sat down in our most excellent seats for “Rent” at 7:55p. Our “most excellent” seats were row E (as in, A, B, C, D,* E*), right in the center, and were the result of an interesting story of how the Internet is changing our lives. 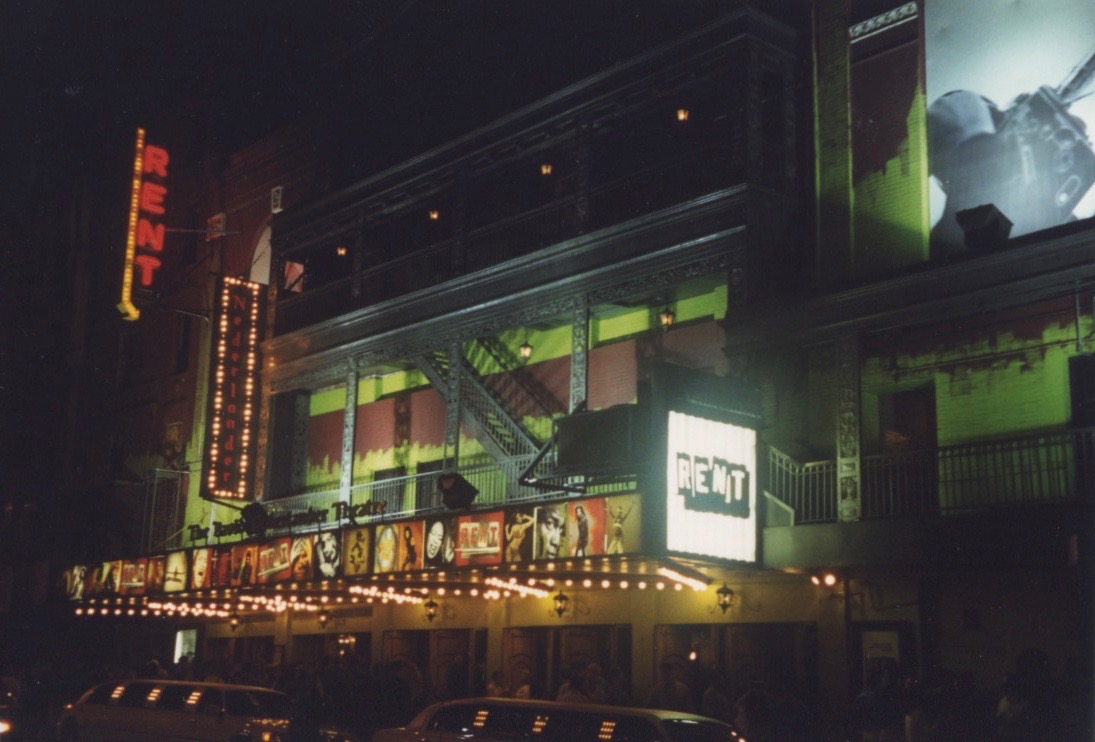 Since January I’ve participated on a Yahoo! discussion board discussing several stocks, including Ticketmaster Online City Search (symbol TMCS). Last month I posted a message mentioning how I had used the TM online website to look for Broadway tickets. The big shows I was looking for, however, were sold out all Memorial Day weekend (“The Lion King”, “Rent”, “Smokey Joe’s Cafe”). But I said something like how great it was to be able to do all that trip planning before leaving home on the Internet, to include buying tickets for the Empire State Bldg from home, and ordering a bunch of tour-i stuff. With no prompting, somebody named “suzyq” posted a message on the board to me saying to email her, she might can get me tickets. Turns our her sister works in some capacity such that she can get producer seats, and cutting out a lot of interesting email exchanges, “suzyq” got her sister to get us terrific tickets for “Rent”, all made possible by the Internet!

“Rent” just blew us away. I had seen it once before two years ago in Dallas, but Stacy couldn’t get over it. She especially liked one of the male leads (Mark). The story line and music is definitely late-90s and not for the young or the intolerant, but what great themes – “No day but today”; “Five hundred twenty-five thousand six hundred minutes, how do you measure one year?”, “There’s only this, there’s only us”. We came back and immediately  bought the two-CD soundtrack. I highly recommend it if it tours close to you. We took the subway back home, but stopped at the Chelsea Cafe for a late-night, post-theater coffee and milk shake.

Another absolutely perfect weather day. Dragged Stacy out of bed at 10:30, dressed in shorts and tshirts, and hopped on the subway headed to Central Park. Got off at 53rd St. and walked around in daylight in the general area where we had been Friday night around the Hard Rock Cafe, Planet Hollywood, Carnegie Hall, etc. Walked past the CBS studios and the Ed Sullivan theater where David Letterman is. Had a ‘real’ NY bagel at a small corner standup bakery near Columbus Circle, then entered Central Park at the southwest corner and meandered up the west side. Walked past the softball fields which seem to be in a lot of movies, looking back towards midtown, past the great lawn which was filled with Sunday sun worshippers, and on to Strawberry Fields and the John Lennon memorial. Then around the lake and the row boats, through the Brambles (Rambles?) – in which you’d swear you were alone in the mountains of Arkansas, instead of in the middle of 10 million people – and over to the east side and the Metropolitan Museum. 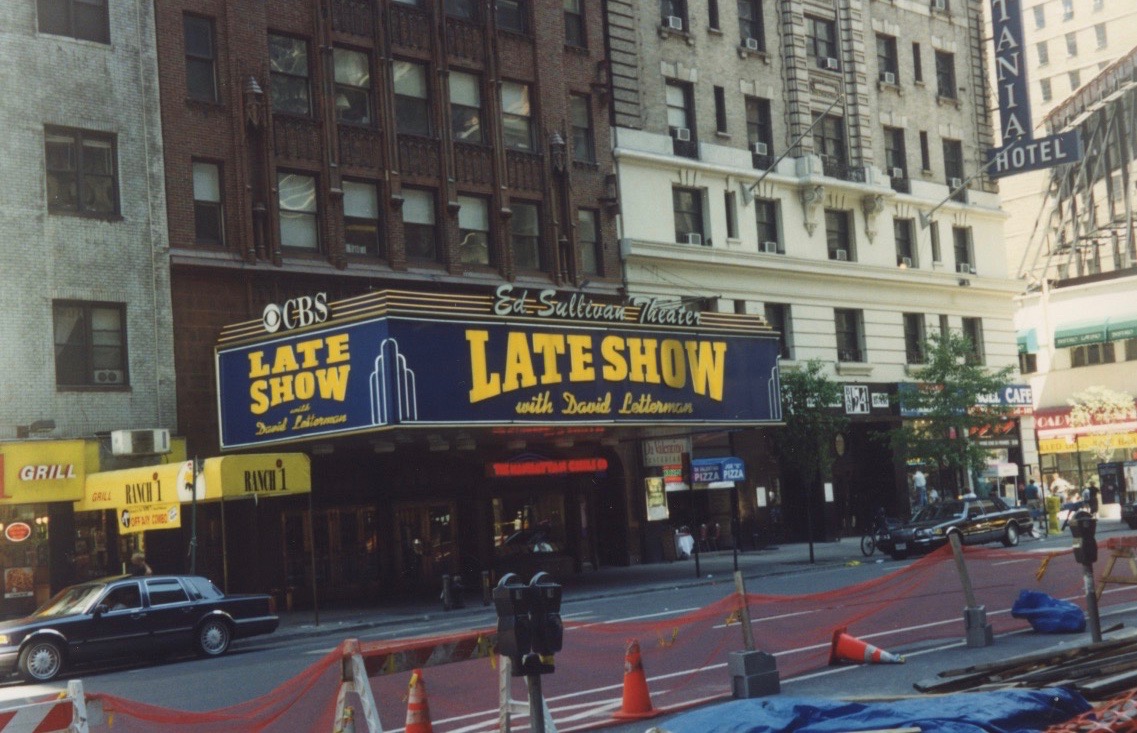 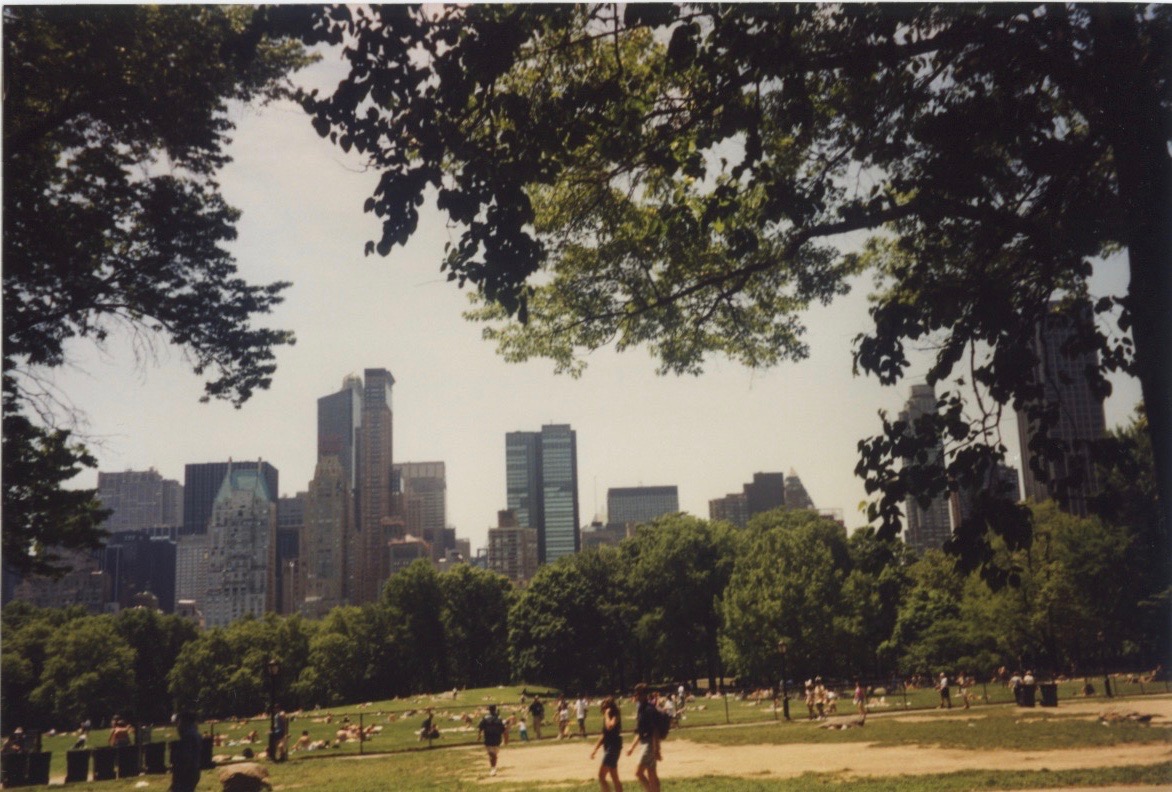 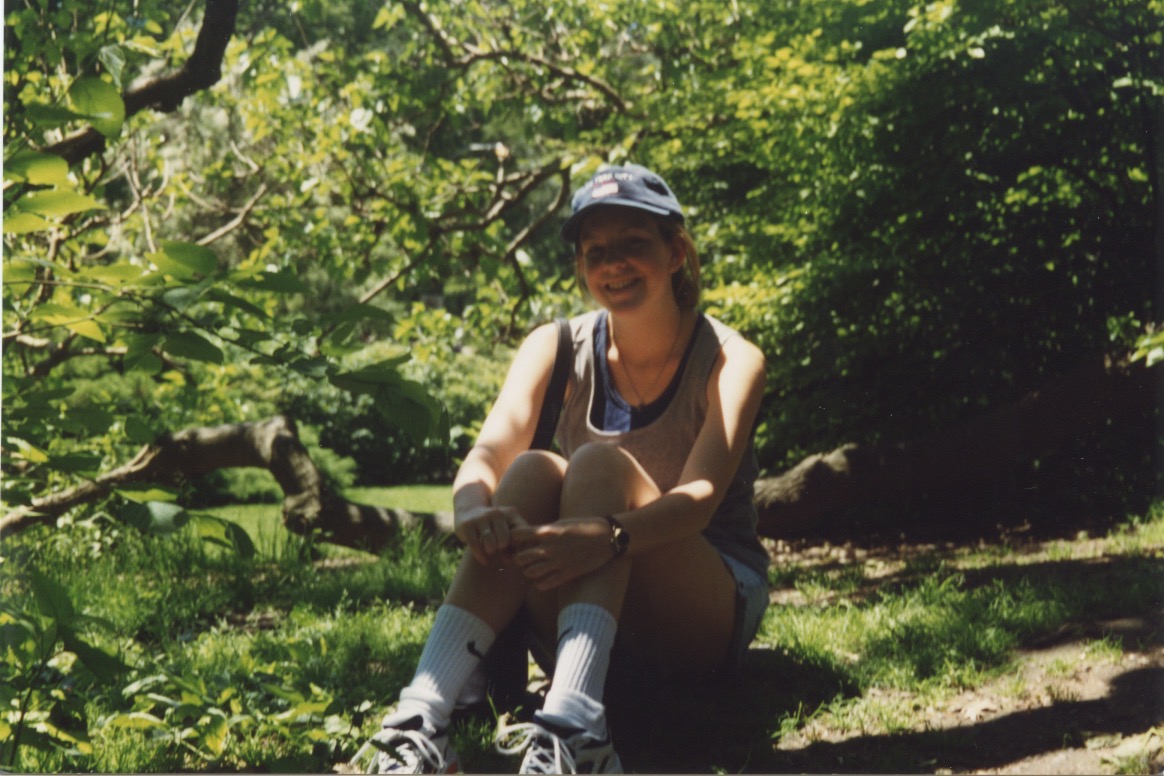 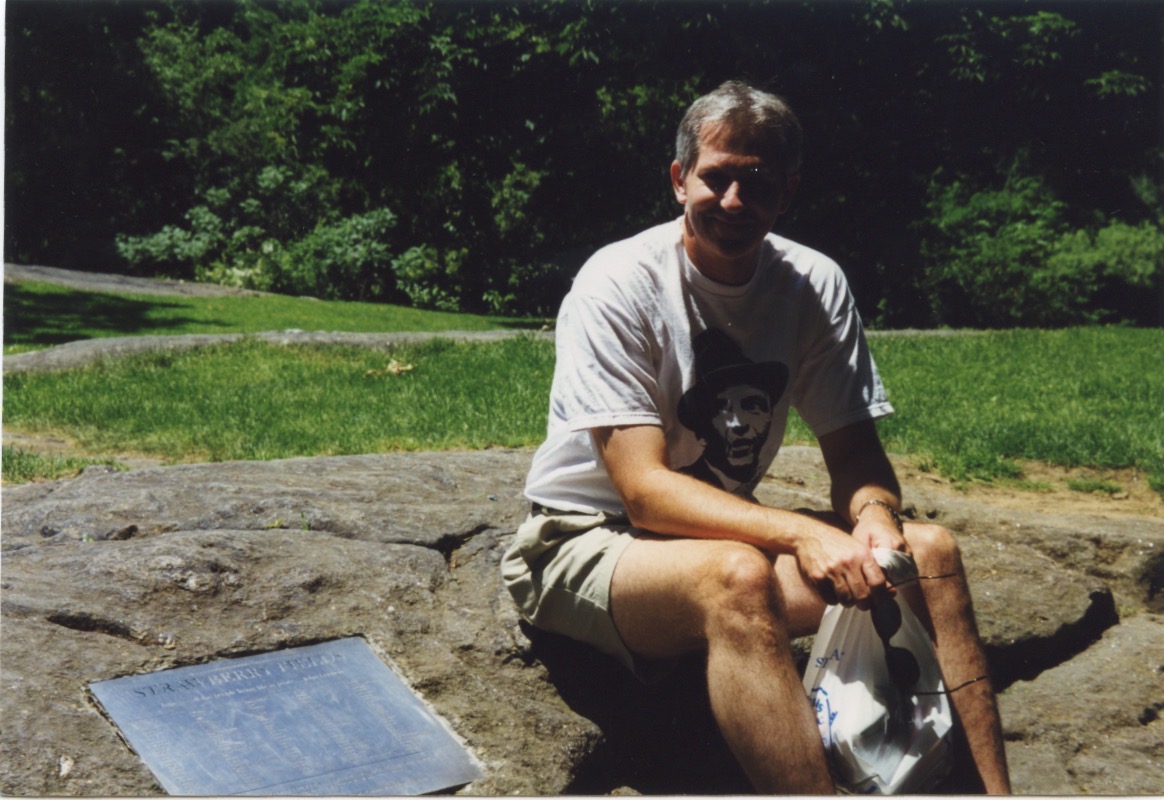 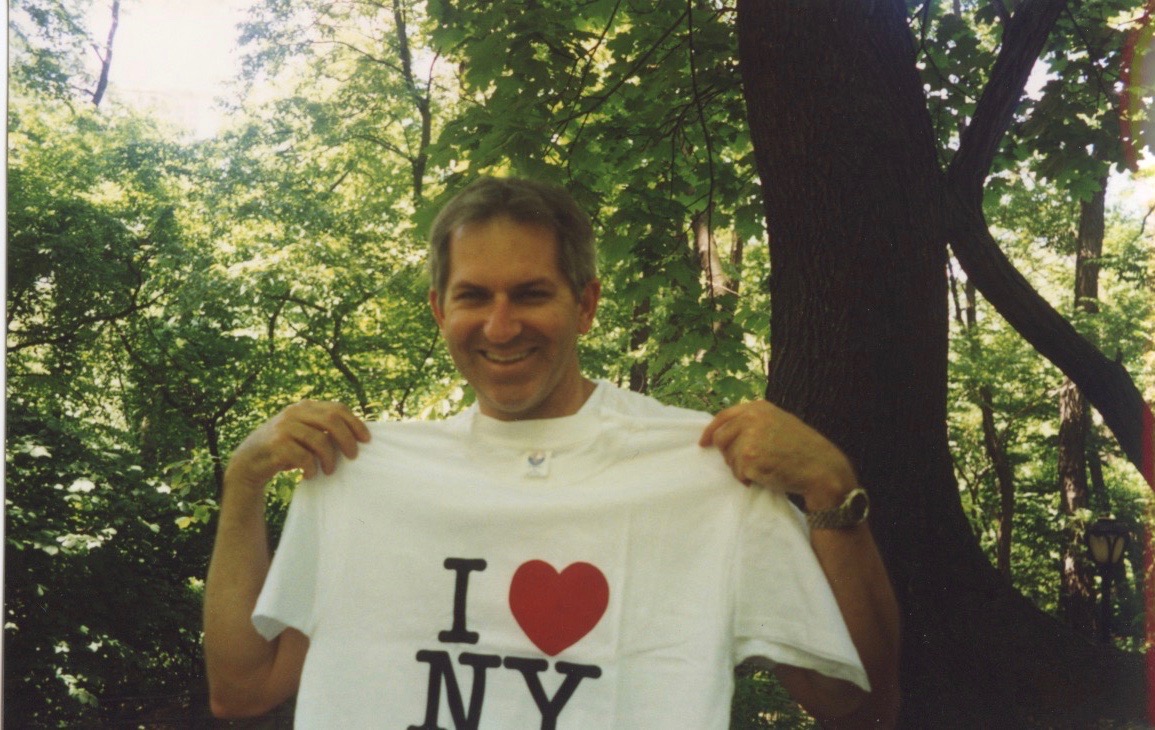 Stacy’s not yet quite appreciative of stuff like museums, but we enjoyed the air conditioning and a brief two-hour walk through some of the museum. She (and I) particularly like the Temple of Dendur, the 3500 year-old Egyptian temple which was moved over from the Nile valley, and the room of antique/ancient musical instruments. 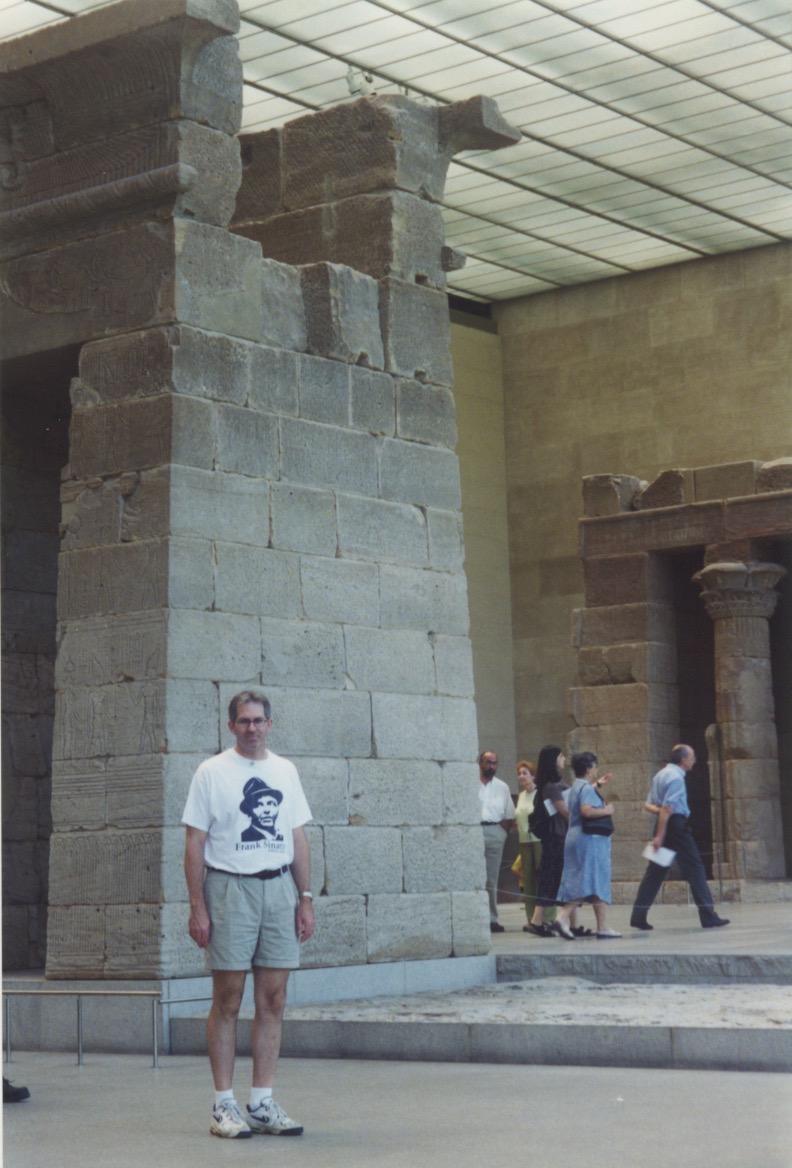 We left the museum and caught a cab down to the southwest corner of the park at 58th street, turned around, and found ourselves in front of FAO Schwarz, probably the most famous toy store in the world, due in part to the floor xylophone scene in the movie “Big”. They had a HUGE room exclusively devoted to the new Star Wars, so we spent some time there, and wandered around in other rooms. Pretty darn impressive. 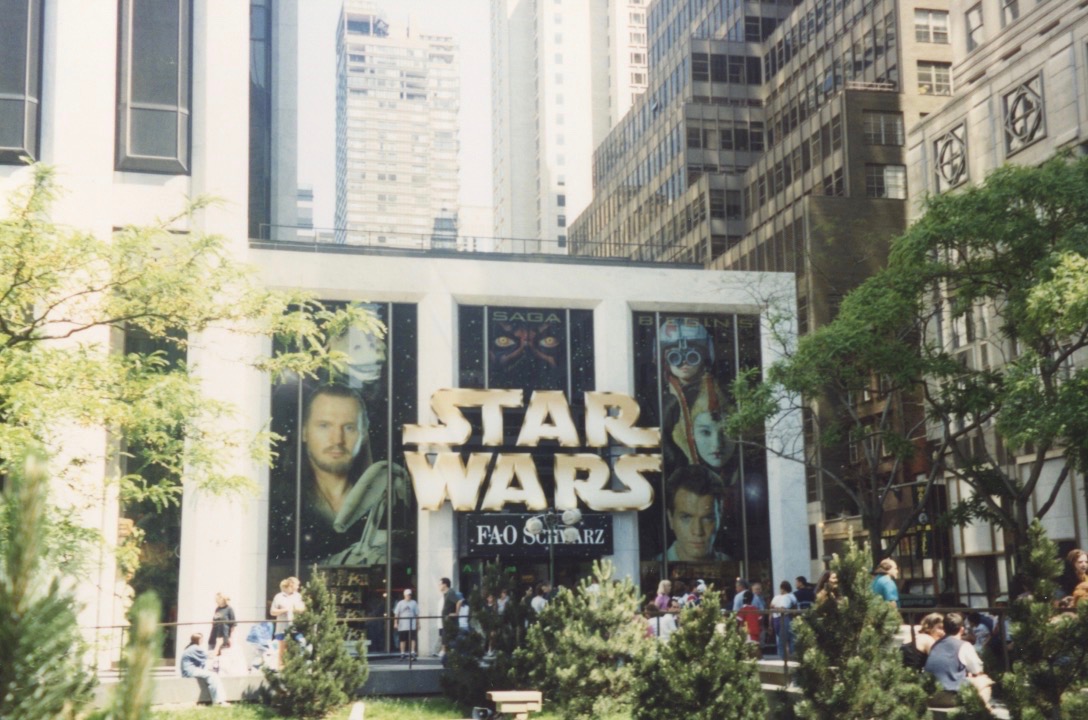 From FAO Schwarz I was wanting to meander down towards Grand Central Terminal, because I really wanted Stacy to see it. On the way we went by the NBC Studios at 30 Rockefeller Plaza, and when we found out they had a studio tour leaving in 30 minutes we decided to do it. It was a little pricey, but definitely a treat to go through several of the studios and sit in the audience seats for “Saturday Night Live”, “Conan O’Brien”, “Rosie O’Donnell”, and the shooting set for “Dateline”. Also got our picture made on the set of “SNL” … at least, it looks like we’re on the set. 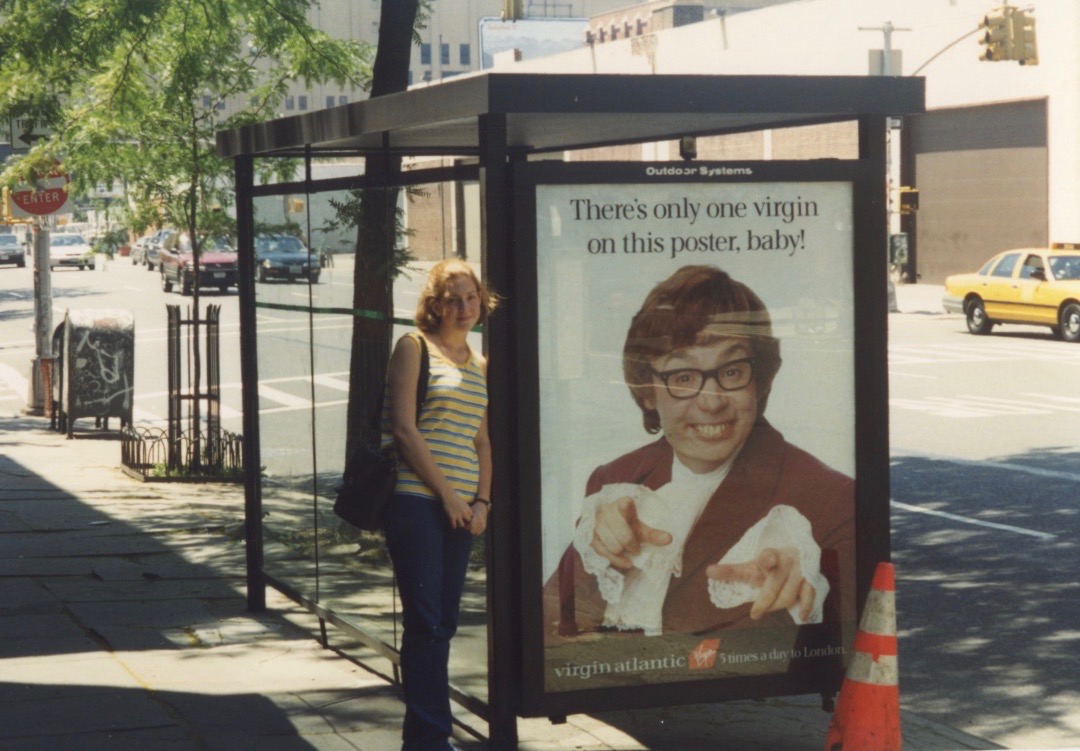 It was a little after 5, and rather than head home, we walked back to the All-Star Cafe on Times Square. The Knicks were playing the Pacers in the first game of the NBA Eastern Finals, and we thought it would be cool to watch the game there. It was such a good idea that about 5,000 other New Yorkers and tour-i had the same idea, so we spent the first half standing upstairs waiting for a table. But we got seated at halftime and relaxed and watched the second half amidst the rabid NY fans. Quite an experience for our last night in New York. Never made it to Grand Central, but …. next time.
Monday, May 31st
Slept late, packed, enjoyed a leisurely sidewalk breakfast/lunch at the Empire Diner, said goodbye to the cats (Gordon and Sparky), and had a car pick us up at 2:00 for the drive to LaGuardia and uneventful flight home. 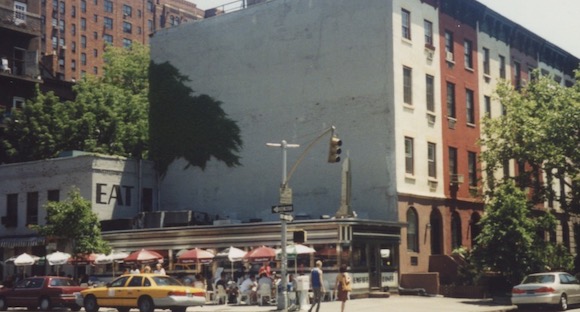 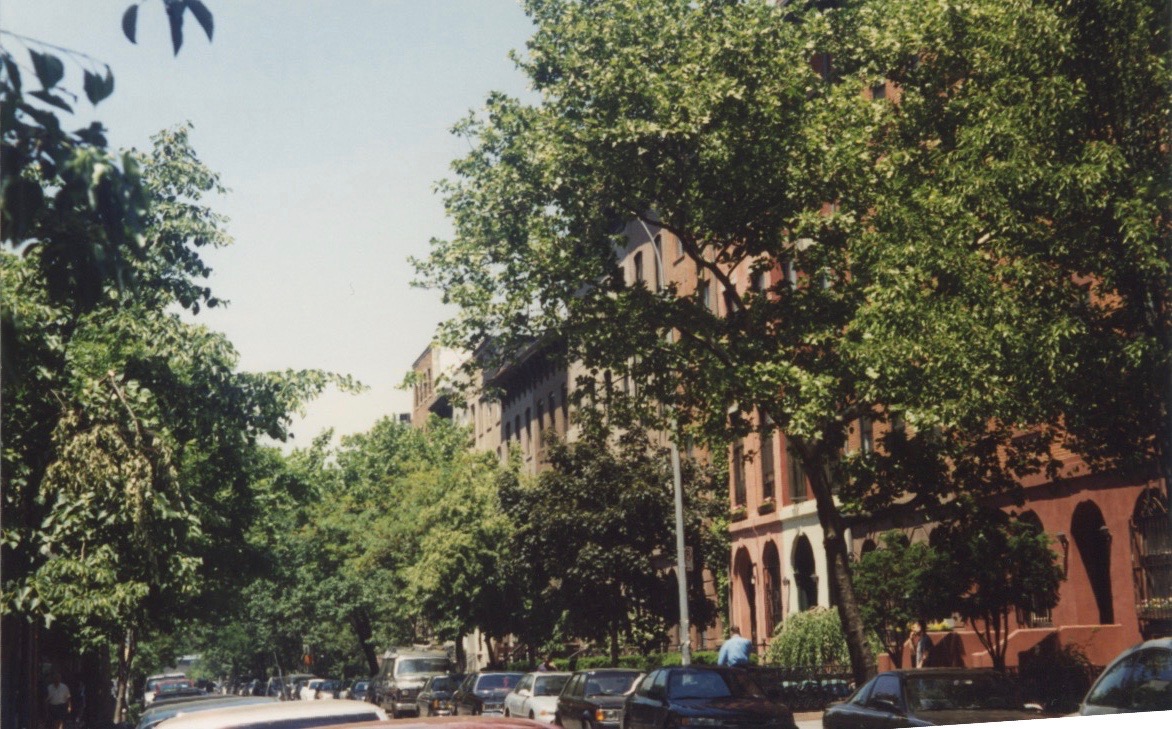 All in all, quite a memorable Memorial Day.
Jim  and Jim – thanks again so much for letting us stay with your cats. Next time we come up you guys have to stay at home so you can show us around. Susan, a big public “thanks” for the tickets. To all who are putting off doing something ….
“No day but today”. 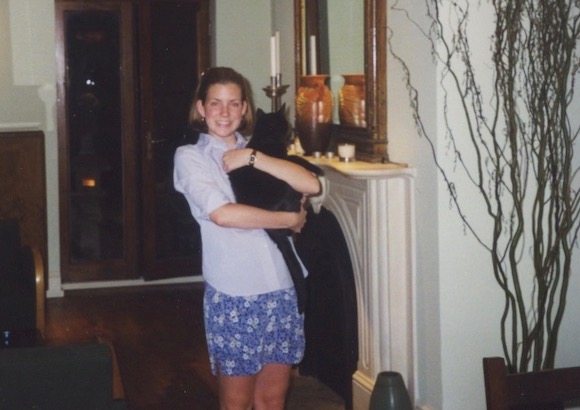