(Reprinted with permission of the Fort Worth Star-Telegram)Posted on Tue, Aug. 13, 2002By PAUL BOURGEOIS
Star-Telegram Staff Writer

That is the very basic idea behind the Center for General Semantics, a new resource in downtown Fort Worth.

The center includes the library and archives of the Institute for General Semantics, a 60-year-old organization based in Brooklyn, N.Y.

Semantics is the science of how and why words mean what they do, and general semantics goes a step further, said Steve Stockdale, 48, director of the center at 1214 Texas St.

It’s a discipline that includes not just language, but philosophy, psychology, science and mathematics. It was conceived by Alfred Korzybski, a Polish-American author, logician and scientist who lived from 1879 to 1950.

“How we use language determines the way we evaluate our relationship with ourselves, others and our world. Many human problems can be traced to our ignorance of the ways we use language and the ways language influence us,” Korzybski said.

The idea is that through greater awareness and introspection, people can better integrate their outer world with their inner world. Simply put, general semantics promotes rational and crucial thinking skills in daily life.

Proponents say general semantics offers a methodology for one to see and experience the world through “new eyes.”

As Korzybski put it: “A person does what he does because he sees the world as he sees it. A person tends to see the world as conforming to the words he has been taught to use about it.” What might appear a trifle New Age flaky is really common-sensical, said Stockdale, an engineering graduate of the Air Force Academy.

Stockdale said general semantics had a large and growing following in the late 1930s and into the 1950s. It was taught at major universities, but interest has waned in recent years.

The library and archive includes more than 2,000 books on science, math, psychology and language; the letters of Korzybski; photographs; and complete sets of Etcetera, a quarterly magazine on general semantics started by Hayakawa in 1943.

The archives had been in storage in New Jersey for nearly 20 years before the Texas-born Stockdale talked the institute into a move to Fort Worth.

The goal, he said, is to be more than just a resource for interested researchers.

“Our mission is to provide training and workshops to help people understand general semantics and to apply it in their lives,” he said. 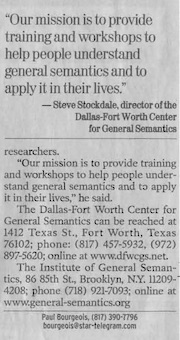