(Printed as a Letter to the Editor, Dallas Morning News, January 20, 2000. Text below the clipping.) 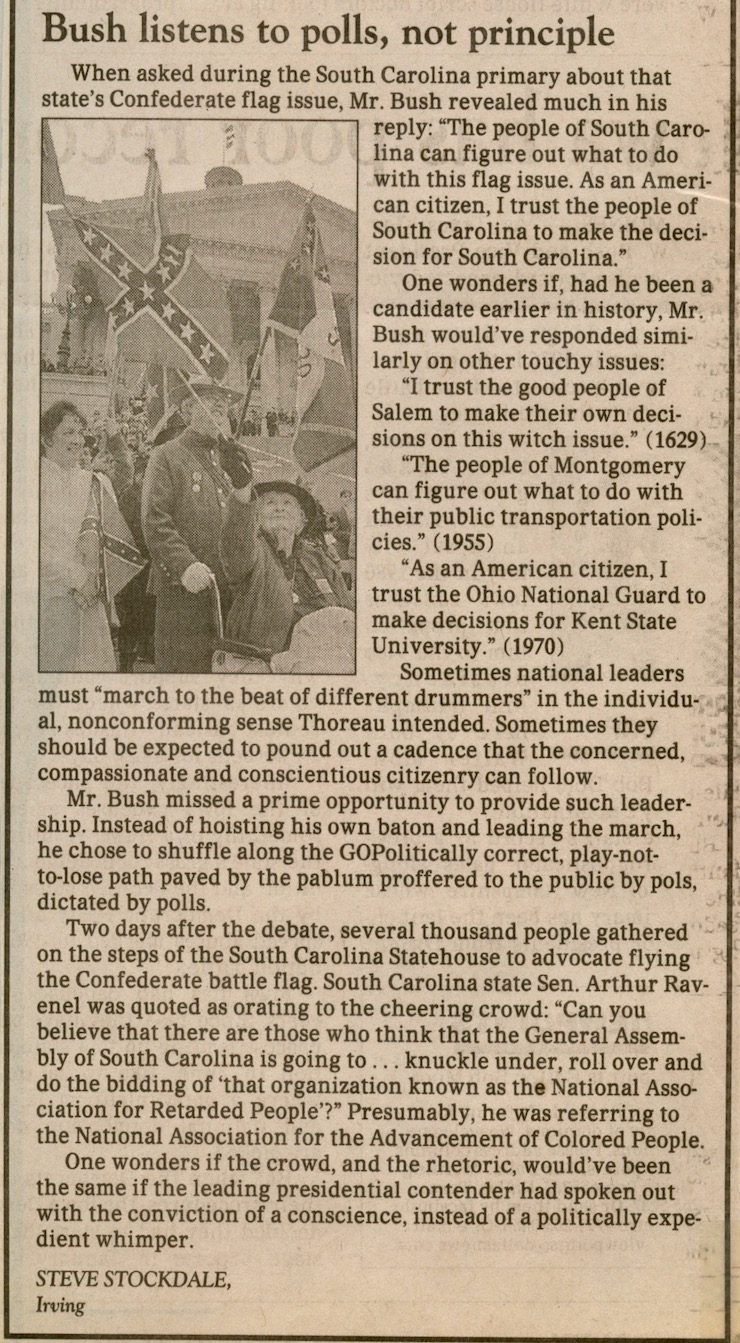 Bush listens to polls, not principle

When asked during the South Carolina primary about that state’s Confederate flag issue, Mr. Bush revealed much in his reply:

One wonders if, had he been a candidate earlier in history, Mr. Bush would’ve responded similarly to other touchy issues:

“I trust the good people of Salem to make their own decisions on this witch issue.” (1629)

“The people of Montgomery can figure out what to do with their public transportation policies.” (1955)

“As an American citizen, I trust the Ohio National Guard to make decisions for Kent State University.” (1970)

Sometimes national leaders must “march to the beat of different drummers” in the individual, non-conforming sense Thoreau intended. Sometimes they should be expected to pound out a cadence that the concerned, compassionate and conscientious citizenry can follow.

Mr. Bush missed a prime opportunity to provide such leadership. Instead of hoisting his own baton and leading the march, he chose to shuffle along the GOPolitically correct, play-not-to-lose path paved by the pablum proferred to the public by the pols, dictated by polls.

Two days after the debate, several thousand people gathered on the steps of the South Carolina Statehouse to advocate flying the Confederate battle flag. South Carolina state Sen. Arthur Ravenel was quoted as orating to the cheering crowd:

“Can you believe that there are those who think that the General Assembly of Carolina is going to … knuckle under, roll over and do the bidding of “that organization known as the National Association for Retarded People’?”

Presumably he was referring to the National Association for the Advancement of Colored People.

One wonders if the crowd, and the rhetoric, would’ve been the same if the leading presidential contender had spoken out with the conviction of a conscience, instead of a politically expedient whimper.