I was somewhat surprised to find this in my “Cadet Wing” attic box. I remember it, but can only guess at the reason I wrote it. I believe that my AOC, Lt. Col. Bob Haines, asked me what I would want to pass along to my successor as CS-39 Squadron Commander, Joe Smith. So I think I wrote it out, typed it, and then probably gave it to Joe – that’s why I just have the handwritten version.

[I’ve since found a comment in my Notebook dated 25 Feb 76 that “job desc due in NLT 1200 Fri, 10 Nov – 29 Feb (Formal).” This seems to confirm what Col. Haines asked me (more like, ordered me) to prepare this as a “job description.” The winter makelist/go-round ended on 29 Feb. Also in the Notebook are my initial notes for this “job description.”]

I don’t presume to speak for any of my 119 classmates who also had the opportunity to experience this short but wonderful leadership laboratory. But in re-reading it, I am proud of my 22 year-old self for some of my observations and self-awareness. And I think some of the details about the more mundane concerns of the cadet experience, c. 1970s, are worth capturing.

There is no better job than Squadron Commander. It is fun, challenging, excruciatingly frustrating, rewarding, heart-warming, and educational. It is something to look forward to, and usually something to look forward to leaving. It encompasses all areas which are essential not only to military development, but to becoming a socially responsible citizen. It provides experiences in five important areas: organizing, enforcing, decision-making, motivating, and supervising. It requires versatility in supporting two different avenues of command – the cadet chain and the officer chain. It is also one of the finest vehicles for self-criticism, evaluation, and improvement available.

The Squadron Commander must work in three general directions: up, with the officer chain and cadet staffs; down, with his underclass subordinates; and laterally, with his own classmates and peers. There are certain policies which he must direct within the Squadron. He also has certain duties and leadership responsibilities. Each of these areas warrants a thorough discussion.

The Commander works primarily with his AOC in directing all endeavors of the Squadron. He should perceive his AOC as an experienced advisor whose suggestions and recommendations are more than likely beneficial. Although the Commander may at times feel his judgment is better than his AOC’s, he should remember that experience nourishes reason. He should draw as much from that experience as possible, while representing the interests of the squadron and himself in controversial issues. He needs to maintain daily contact with the AOC and coordinate all squadron-related business with him. It is beneficial to take notes during any discussion, as less-emphasized points can be easily overlooked if not recorded.

The Commander must also work closely with his First Class staff in running the squadron. His Operations Officer should function as his second, his back-up advisor, and disciplinarian. His Flight Commanders should act as three “mini-Squadron Commanders,” handling such duties as inspecting rooms, uniforms and personal appearance, enforcing regulations, directives and policies, recommend privileges and punishments, and advising the Commander on all Squadron issues. This conscientious involvement frees the Squadron Commander to concentrate on directing the Squadron and anticipating problems. The Executive Officer is very important in coordinating all projects, plans and events, as well as acting as Protocol Officer for interactions with Squadron Participants and Sponsors. The Commander should add his emphasis and support to the Safety program and assist the Safety Officer in establishing a serious safety attitude. He should ensure that all correspondence leaving the squadron be approved by the Administrative Officer. He should leave each staff member latitude enough to establish their own individual programs and convey trust in them while always following up to ensure a successful program.

Finally, the Commander must deal with his subordinates in the lower three classes, primarily through his First Sergeant. He needs to remember that he is in a great position to teach the First Sergeant as to responsibility, authority, decision-making and leadership techniques. In return, the First Sergeant provides him with invaluable assistance in both an informative and advisory role. He should consult the First Sergeant on all matters concerning the lower classes and allow him to see as much of the Squadron Commander position as possible. It is recommended that the First Sergeant be responsible for squadron appearance and that he be allowed to see the weekly Element Leader Reports.

It is up to each Commander to determine specific policies and procedures. However, proven practices should be relayed and encouraged. It is recommended that Element Leader Reports be submitted to the Squadron Commander not later than Monday morning, and given to the AOC not later than Tuesday morning of each week. Also beneficial are required weekly reports from the Flight Commanders and Executive Officer. These informal reports can include results of room/haircut inspections, counseling, Forms 10 issued, and suggestions from the Flight Commander and an up-to-date review of all squadron projects and events from the Executive Officer. Forms 99 should be submitted no longer than Wednesday Taps to ensure the earliest notification should unexpected plans be necessary. Weekly staff meetings, to include Second Class positions, are necessary and can be used to great benefit. It is easier for the Operations Sergeant to plan the agenda for Squadron Meetings if those cadets requiring time turn in cards Wednesday stating their needed time and information to be briefed.

It is up to each Commander to develop his individual leadership personality. There are certain adages and suggestions which should always hold true, however, regardless of personality. First and foremost, the Commander must set the example in all areas. There will be times when this is impossible, but he should be conscious of his position as the figure head. He should never act hastily, but consult his advisors and use whatever time he has available before making a difficult decision. He should listen more than talk. Because of his position, the Commander will know information not available to other cadets. He should not feel obligated to explain rationale behind every decision, but he should use his good judgment in determining what should or should not be explained. It is essential that he establish his credibility early by enforcing minor policies such as hats in the halls, stereos after Taps, and footgear in the halls.

Administratively, he must understand all types of privileges and his authority for each. He must ensure monthly counseling is accomplished before the monthly deadline, and take care that all reports bearing his signature are checked for neatness, grammar and typographical errors. He should continually be checking repair of uniforms and proper use of the locator board. He should always be acting to prevent infractions within the squadron in order to avoid having to react to problems due to poor supervision.

Lastly, and most importantly to the Squadron Commander’s personal development, he should set his job in perspective before assuming the command. His primary consideration is the 100 or so men in his squadron, their training in discipline, duty, and responsibility. It is essential, however, that he recognize his own position as one in which to learn invaluable lessons, skills, and maturity. A commander who approaches his job with the sole intention of making as few mistakes as possible is cheating himself of many experiences. He should realize that he will make mistakes, and that mistakes are nothing to be afraid of – that is the great advantage of an Academy environment. What he should be conscious of is learning by his mistakes and eliminating similar mistakes in the future. His attitude and morale affect the entire Squadron, and the difference is evident between a Commander who feels he has an AOC and 100 men on his back, and one with an AOC and 100 men who are going to help him do his job. Finally, the Squadron Commander should recognize that he commands a certain degree of respect by his position, but that any further respect is based on his own leadership techniques. He affects each member of the Squadron in a different way. What can be more exciting to a person than realizing he has the responsibility to make a significant impact in the development of another’s life? 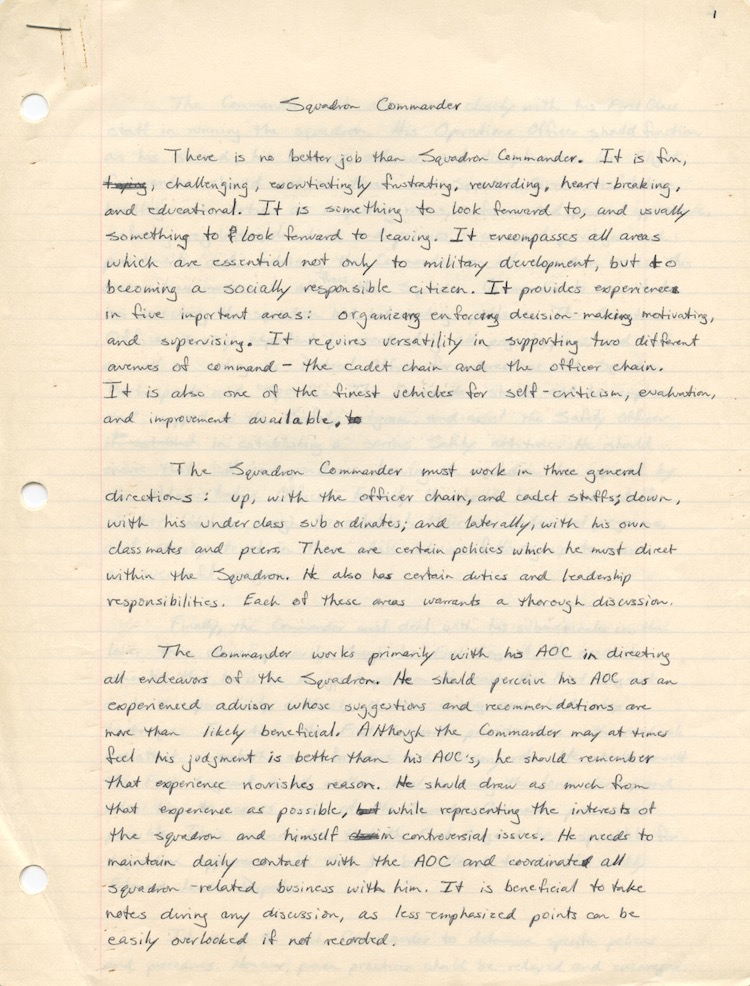 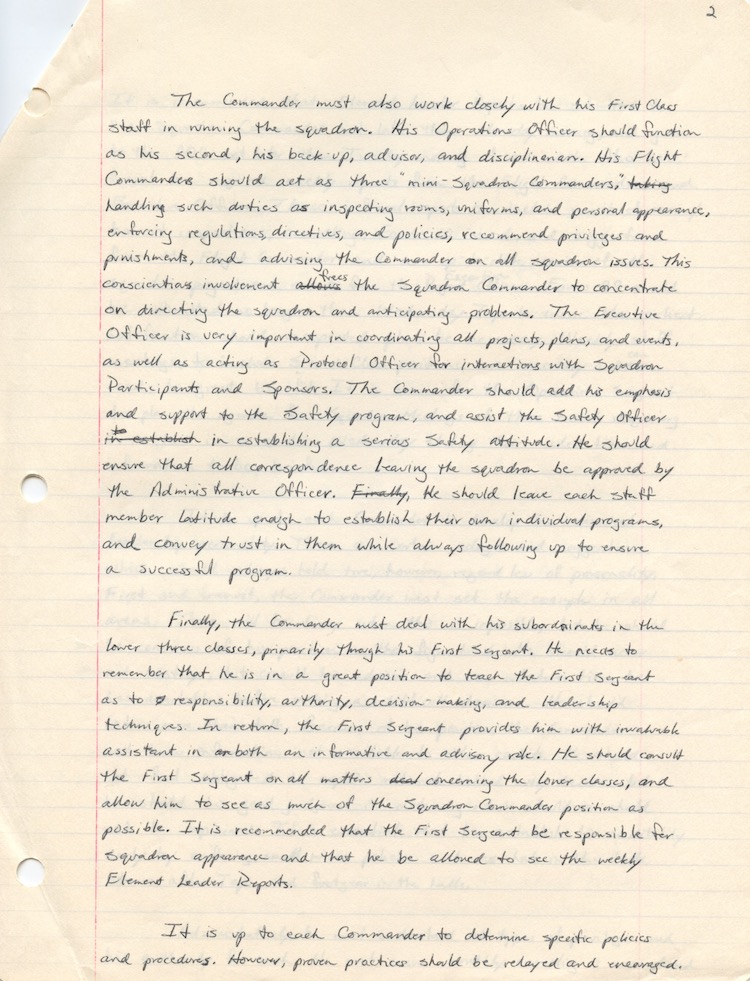 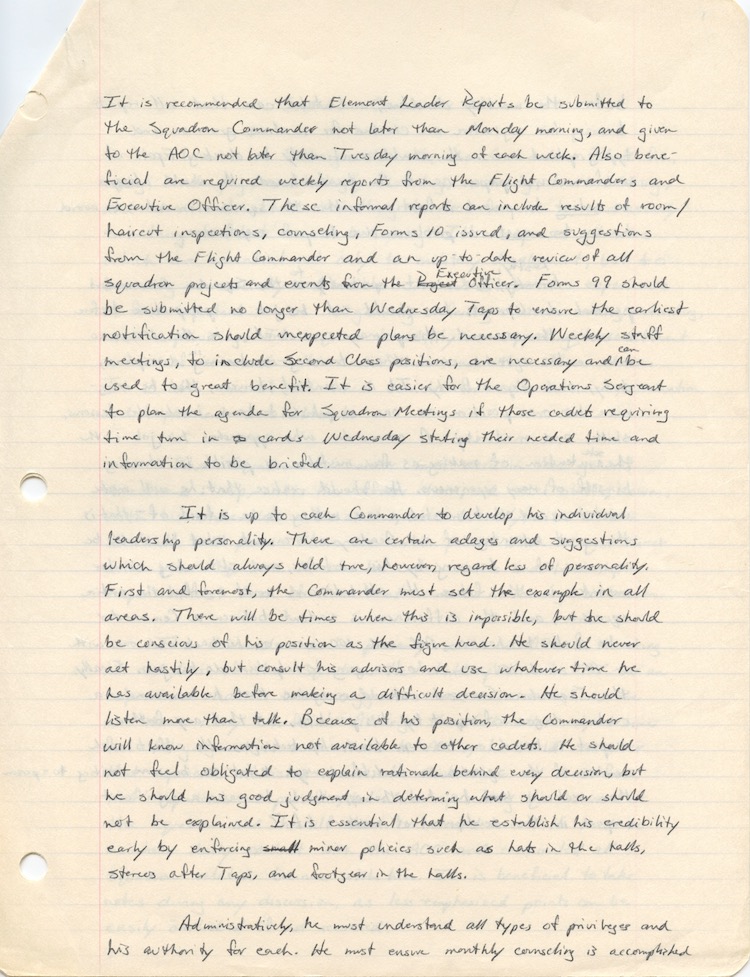 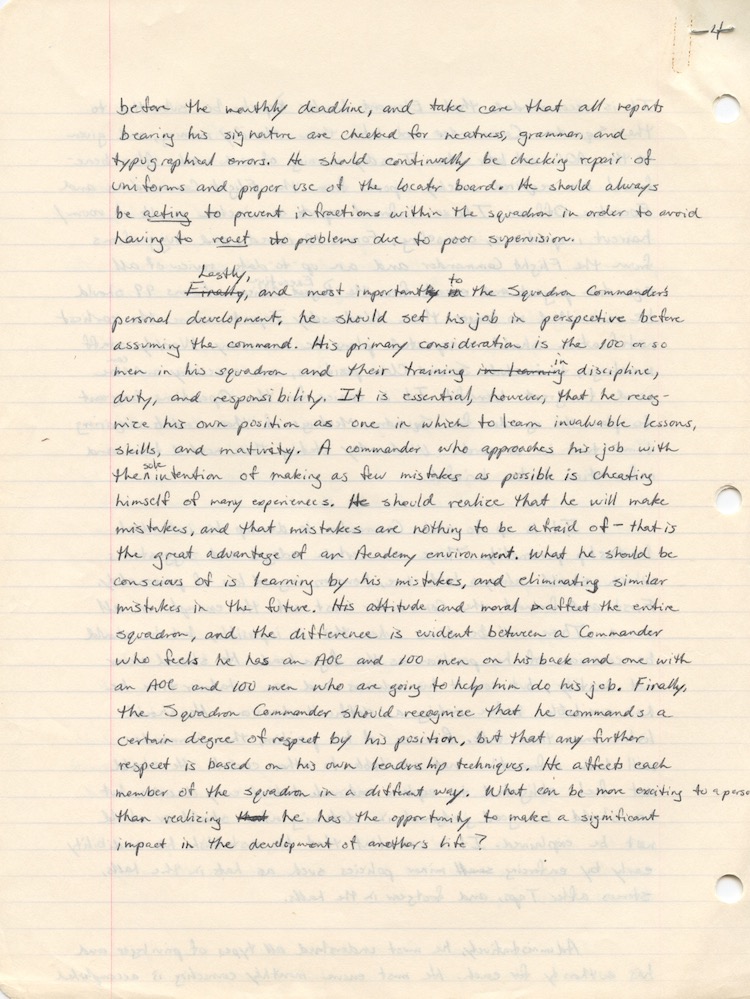