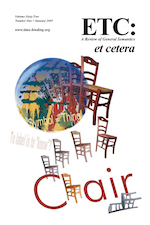 Nothing illustrates the power of symbols and language quite like a presidential election. Of course, those of us who know a little bit of general semantics recognize that this ‘power’ lies not in the words and symbols themselves, but in the motivations, intentions, reactions, and evaluations of the individual human beings who speak, write, see, hear, and read the words and symbols.

Alfred Korzybski emphasized that we must vigilantly maintain an ongoing awareness that symbols (or “maps”) are not the things symbolized (or “territories”). He underscored the potential consequences of confusing symbols with their referents when he cautioned that, “Those who rule the symbols, rule us.” (1)

Who rules your symbols?

With this issue we introduce a new regular feature, “Calling Out the Symbol Rulers.” Each quarter we will highlight examples of how rulers rule by symbols, and how we let ourselves be ruled by symbols. This feature will succeed to the degree that you and other readers participate in the process by corresponding with us — we seek your responses, reactions, analyses, opinions, and examples you find pertinent to this topic.

Whom might we classify as potential symbol rulers? By our definition, just about anybody who participates in a communicative transaction could be considered a symbol ruler. We might start by carefully observing people of influence such as politicians, bureaucrats, teachers, bosses, parents, supervisors, coaches, advertisers, priests, preachers, rabbis, mullahs, commentators, columnists, reporters, etc. How do they generate, manipulate, frame, and convey their messages? What techniques do they employ to influence our judgments and decisions?

You might apply some of the principles of general semantics in your analyses:

Remember … these same principles that you apply critically to others, you can apply to yourself. And we want to emphasize that in general semantics we are not so concerned with the words as we are with the underlying human thinking-feeling and evaluating processes, judgments, perspectives, etc., that are conveyed by the words.