If you’ve reached this page and haven’t yet completed the survey, please go here to take the 20-question survey, then return. 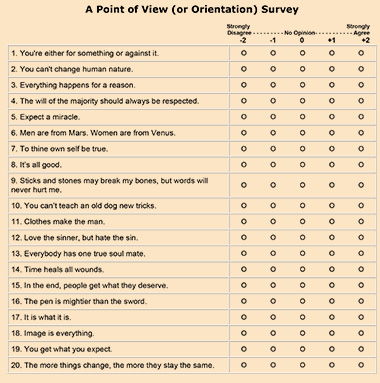 Before you read about the results of the Point of View (POV) Survey you completed, please do the following:

Purpose of the POV Survey

The original purpose of the survey was to simply provide a basis for discussion among the rather ‘homogenous’ class of college students I taught. The students in these classes were overwhelmingly white, 18-22 years old, from (on average) middle-to-upper class Texas families, studying journalism or advertising/public relations. From all outward appearances, these classes did not represent much demographic diversity.

Despite this apparent lack of diversity, however, when we discussed the results of this survey, we invariably discovered that the homogenous appearances did not yield homogenous attitudes.

So the first purpose of the survey is to point out that differences (of attitudes) may lurk below the apparent similarities (of appearances).

A second purpose of the survey is to point out that, in a very notional and unscientific way, we could consider the results of this little 20-question survey as a depiction of a personal point of view, or orientation.

*** Let me explain here that in no way do I present this survey as anything other than a class activity for discussion. For my Educational Psychology graduate degree I took a course in assessment and make no claims as to the validity or reliability of this “instrument.”

For example, consider the hypothetical results of Leslie and Pat below. Based solely on this unscientific exercise, one could say that based on their responses to the statements on the survey, Pat exhibits an orientation that is generally more in agreement with the statements than Leslie, as Pat’s blue lines fall generally to the right of Leslie’s red lines. 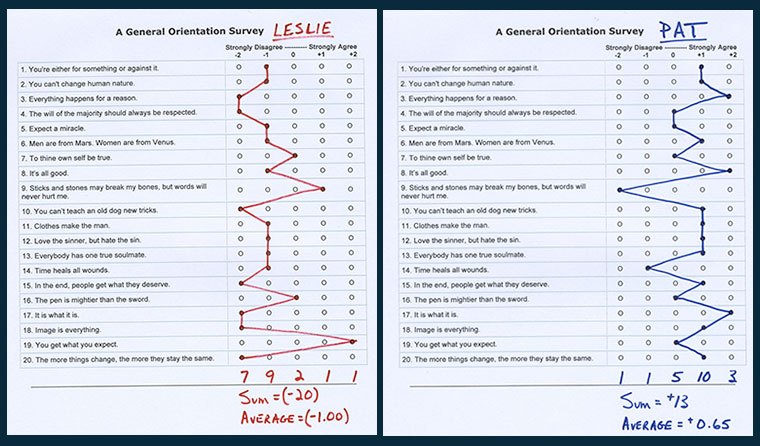 Beyond comparing the placement and shape of the two vertical lines (Pat’s and Leslie’s personal orientations or points of view), let’s look at some of their responses to the statements. Since I made up Pat and Leslie, and their responses, I can tell you that the only statement on which they agreed is #16, “The pen is mightier than the sword.”

On statements #3 and #17, however, their responses were complete opposites.

#17. It is what it is. (Again, Pat strongly agreed, Leslie strongly disagreed.)

I hope you can see how, in the hands of a skilled classroom facilitator (ahem), a discussion of these differences might yield robust class participation.

And then the third purpose of survey, after discussing the class norms and averages, differences and similarities, is to consider questions such as these:

We’ll come back to these questions later. But now let’s look at your Point of View Survey results.

Based on 434 survey submittals as of 28 January, the following slides portray several different types of analysis.

1. Percentage of all responses by statement and response

Note: Percentages do not total 100 due to non-responses and rounding. 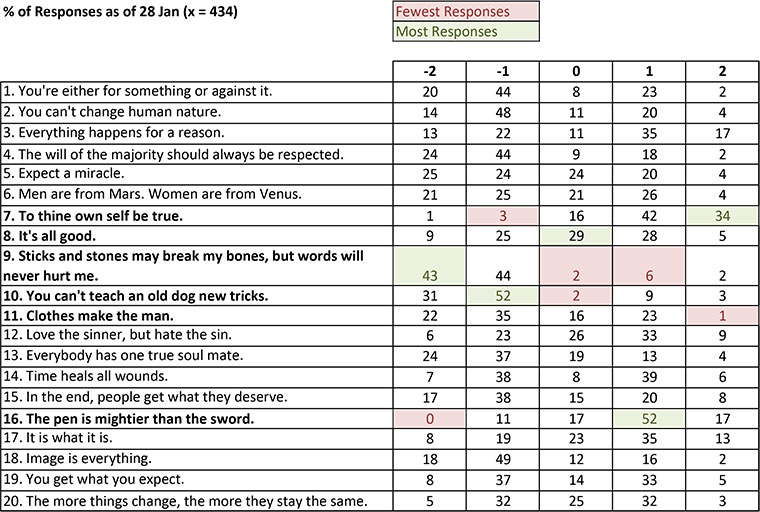 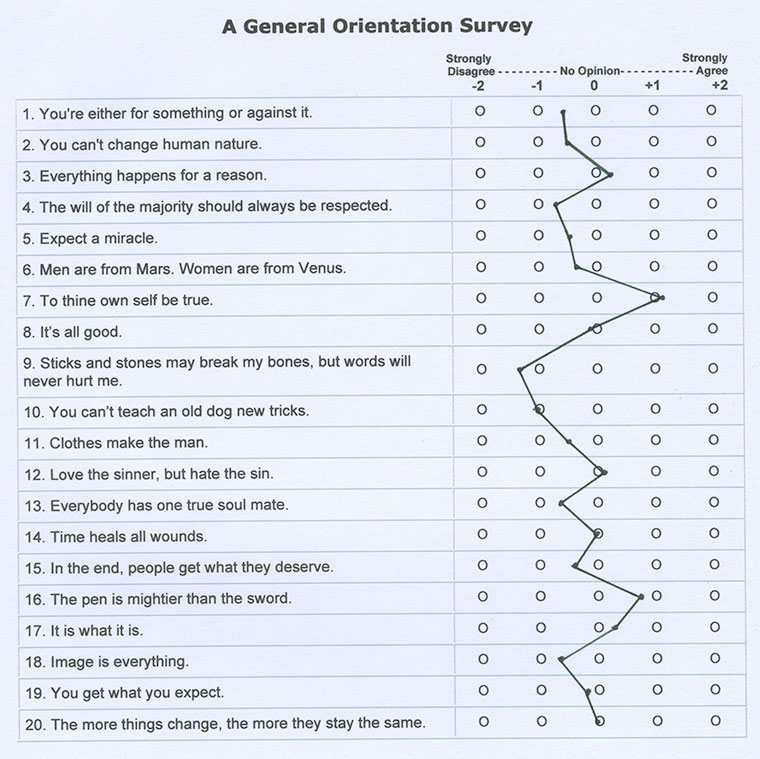 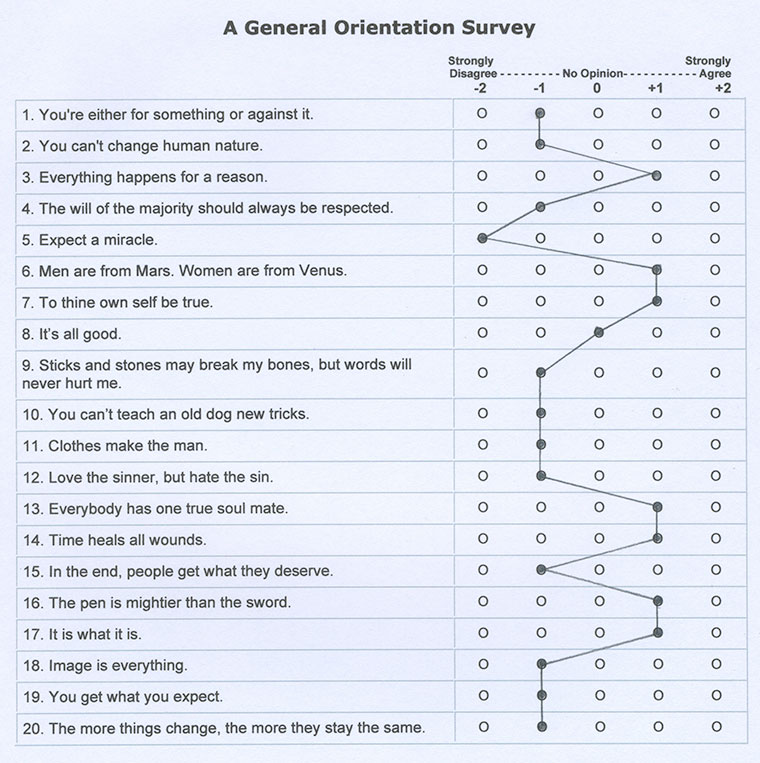 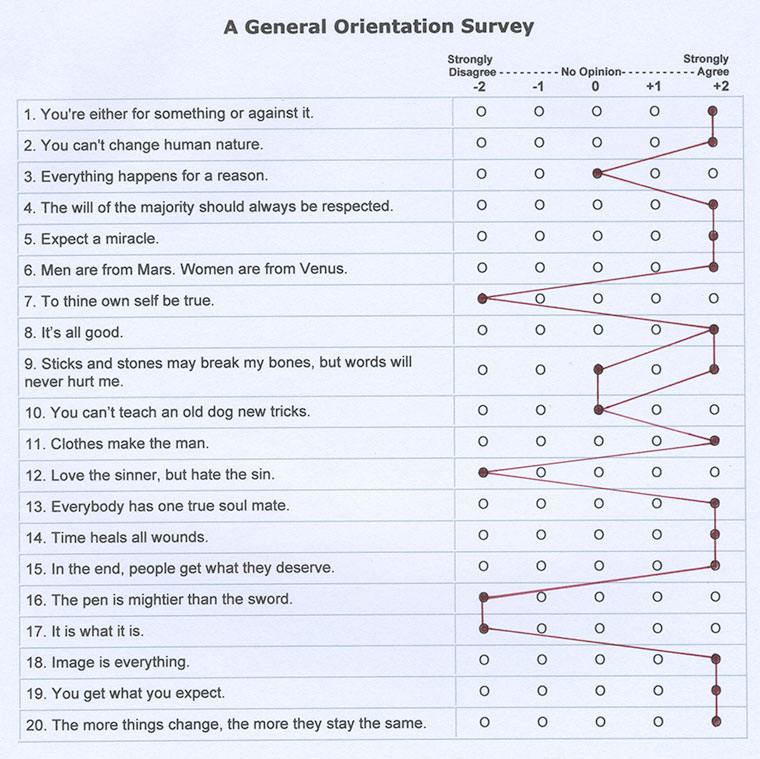 Note: This ignores all “0 No Opinion” responses. 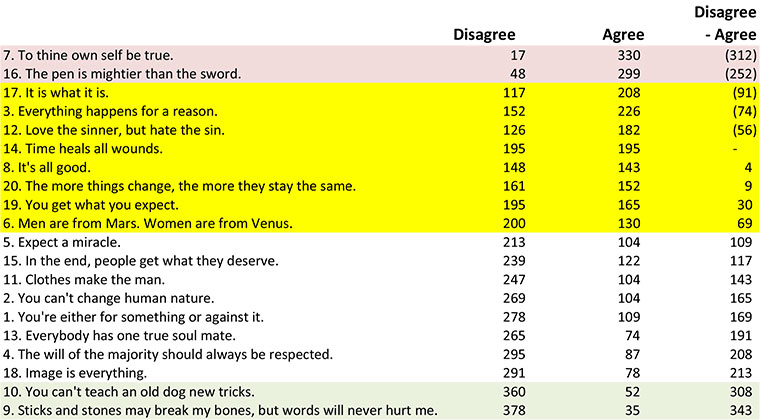 Note: Statements with differences less than [+/- 100] are annotated on the chart as they can be considered the most “equal” and therefore most polarized. Or … do the statements at either end of the chart depict more polarization? 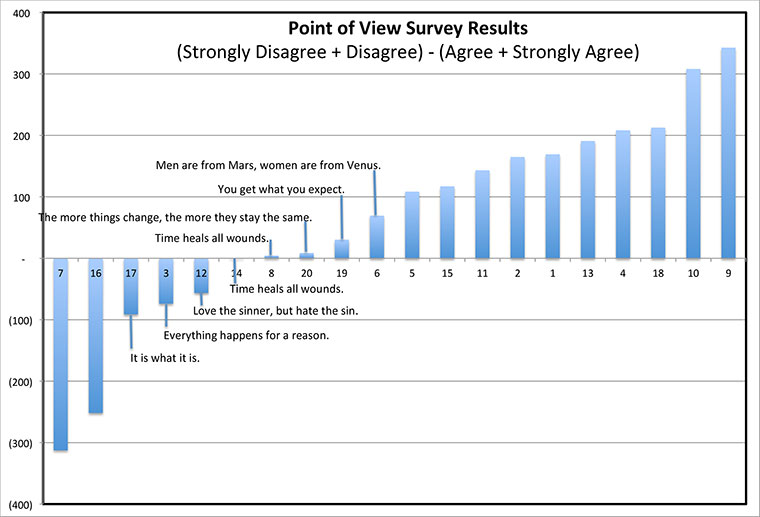 What are your reactions to your Point of View results?

Share your reactions with the class in the Discussion that follows. If you’d like to view the data used to generate these slides, you can download the Excel file.

You may want to respond to the questions asked on the results page: