The primary neuroscience resources on this site are summarized below. However, there are other sources throughout the Massive Open Online Course and General Semantics areas. 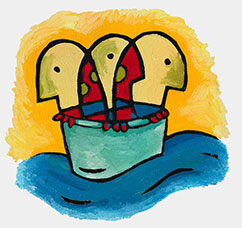 From About Ourselves in the World:To varying degrees, we each have common human capabilities and limitations. We have imperfect sensing capabilities. We have nervous systems that can mislead and misinform us. We have physiological and neurological limitations. In this respect we are all “in the same boat,” but yet we are each uniquely-individual human beings with different-sized and types of paddles, so to speak. If we don’t acknowledge these differences in our capabilities and limitations, we will misunderstand our perceptions of the world around us. So, how do we work? Read more.

Sleights of Mind Book Signing (authors Stephen L. Macknik and Susana Martinez-Conde with Sandra Blakeslee). I attended the book signing hosted by the three authors in Santa Fe, February 2011. Included are my notes from the reading and discussion by the authors about their book, Sleights of Mind: What the Neuroscience of Magic Reveals About Our Everyday Deceptions. February 2011.

Coincident with the book release, a 12-minute segment of PBS “Nova Science Now,” was devoted to “Magic and the Brain.” Hosted by Penn and Teller, the segment was based on the book. Watch on the PBS website. 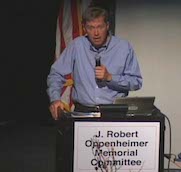 With permission and cooperation of the Memorial Committee, I prepared the transcript of Hawkins’ lecture (available here), including photos of the slides from the presentation. Several clips from the video of the program are here. 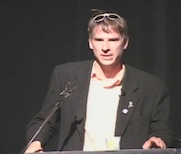 Christof Koch, author of The Quest for Consciousness: A Neurobiological Approach, presented the 2005 J. Robert Oppenheimer Memorial Lecture, titled on his book.

From the video recording of the lecture, I’ve edited several clips that illustrate the mundane yet amazing ways our brains works. Four clips of his demonstrations are available here.

Charlie Rose and his Nobel Laureate co-host Eric Kandel began a 12-episode series on the brain in late 2009 on PBS, concentrating on the biology and functioning of the “normal” brain. In 2011, the pair joined again in a second series to explore abnormalities and diseases of the brain and nervous system. They began a third series in March 2015 to investigate brain science and society. For each episode I’ve abstracted video clips and notes that I found particularly relevant to my interests, as well as a list of the guests.

The last episode I summarized in the table was Series 3 #1 on Aggression that aired on March 15, 2015. Episodes airing since then with direct links to the Series website:

The brain series is available online at www.charlierose.com.