Beginners often take upon themselves the task of enthusiastically spreading their new-found “wisdom” to family and friends. We suggest that, for best long-term results, you temper this response. —Susan & Bruce Kodish (2011, p. 200) 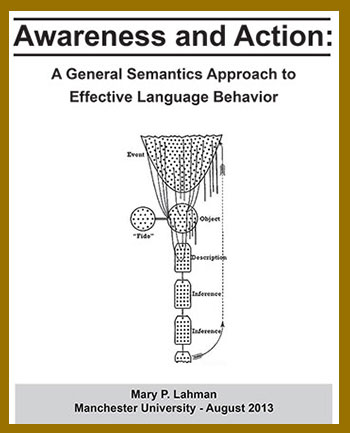 At the end of a Language and Thought course, we often conclude that everyone needs to learn about general semantics. Once we recognize the allness language in that statement, we discuss ways to continue the “course-generated enthusiasm” for a general semantics approach to language behavior. Fully convinced of our time-binding responsibilities, we wonder how to best teach others about the patterns of miscommunication.

One semester, I shared these discussions with Professor Keller, who proposed that we worry less about “teaching others” and more about “modeling the correctives.” I often saw him follow this advice when participating in and facilitating community group discussions. Beginning his interactions with the simple phrase, “I wonder if,” he modeled how to question and paraphrase. He often used the “how much,” “which,” and “when” indexes, seeking information from the territory (people and contexts) and then updating his map (language and perceptions).

After helping to edit this text, my son wondered how I could have known about the pitfalls of language for so long and still exhibit patterns of miscommunication. I explained to him, as Meiers (1952) convinced participants at The First Conference in General Semantics in 1951, that living extensionally is “a lifetime process” (p. 277). More telling is how Meiers warned newcomers of the dangers of becoming general semantics fanatics. I share Meiers’s concern, so offer several of these warnings as well:

Each of these dangers resonates with those who believe that they can communicate more effectively if they keep applying general semantics formulations. People may find themselves guilty of each of these behaviors as they diligently pursue eliminating patterns of miscommunication.

In the pursuit of excellence, we may forget, that we are “acquiring an orientation, not a straitjacket” (Kodish & Kodish, 2011, p. 200). Just because we are raising our awareness of our nervous systems’ limitations, we cannot assume that others will be as willing to learn about abstraction and the resulting “misevaluations” found in language behavior.

Ultimately, we would be wise to heed the advice about “minimum expectations” offered by Kodish and Kodish (2011): “When we have minimum expectations about any situation, that is, we’re prepared for not finding what we want, we will more likely find the ‘facts’ of the situation better than we expected; we’ve prepared ourselves for curiosity, change, excitement, happiness, hope, sanity, etc.” (p. 199). Perhaps just aiming for humor in the way that we misuse language will help us to continue the extensional journey.