Culture and the Individual

Excerpt from “Culture and the Individual” by Aldous Huxley

This is an excerpt from an article riginally published in Playboy Magazine, November 1963, as “A Philosopher’s Visionary Prediction,” one of three essays published together under the title, The Pros and Cons, History and Future Possibilities of Vision-Inducing Psychochemicals. 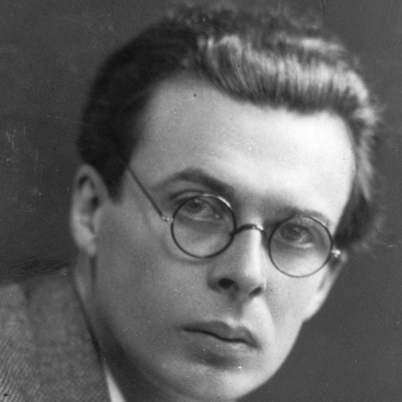 Thanks to language and culture, human behavior can be incomparably more intelligent, more original, creative and flexible than the behavior of animals, whose brains are too small to accommodate the number of neurons necessary for the invention of language and the transmission of accumulated knowledge. But, thanks again to language and culture, human beings often behave with a stupidity, a lack of realism, a total inappropriateness, of which animals are incapable.

Trobriand Islander or Bostonian, Sicilian Catholic or Japanese Buddhist, each of us is born into some culture and passes his life within its confines. Between every human consciousness and the rest of the world stands an invisible fence, a network of traditional thinking-and-feeling patterns, of secondhand notions that have turned into axioms, of ancient slogans revered as divine revelations. What we see through the meshes of this net is never, of course, the unknowable “thing in itself.” It is not even, in most cases, the thing as it impinges upon our senses and as our organism spontaneously reacts to it. What we ordinarily take in and respond to is a curious mixture of immediate experience with culturally conditioned symbol, of sense impressions with preconceived ideas about the nature of things. And by most people the symbolic elements in this cocktail of awareness are felt to be more important than the elements contributed by immediate experience. Inevitably so, for, to those who accept their culture totally and uncritically, words in the familiar language do not stand (however inadequately) for things. On the contrary, things stand for familiar words. Each unique event of their ongoing life is instantly and automatically classified as yet another concrete illustration of one of the verbalized, culture-hallowed abstractions drummed into their heads by childhood conditioning.

It goes without saying that many of the ideas handed down to us by the transmitters of culture are eminently sensible and realistic. (If they were not, the human species would now be extinct.) But, along with these useful concepts, every culture hands down a stock of unrealistic notions, some of which never made any sense, while others may once have possessed survival value, but have now, in the changed and changing circumstances of ongoing history, become completely irrelevant. Since human beings respond to symbols as promptly and unequivocally as they respond to the stimuli of unmediated experience, and since most of them naively believe that culture-hallowed words about things are as real as, or even realer than their perceptions of the things themselves, these outdated or intrinsically nonsensical notions do enormous harm. Thanks to the realistic ideas handed down by culture, mankind has survived and, in certain fields, progresses. But thanks to the pernicious nonsense drummed into every individual in the course of his acculturation, mankind, though surviving and progressing, has always been in trouble. History is the record, among other things, of the fantastic and generally fiendish tricks played upon itself by culture-maddened humanity. And the hideous game goes on.

What can, and what should, the individual do to improve his ironically equivocal relationship with the culture in which he finds himself embedded? How can he continue to enjoy the benefits of culture without, at the same time, being stupefied or frenziedly intoxicated by its poisons? How can he become discriminatingly acculturated, rejecting what is silly or downright evil in his conditioning, and holding fast to that which makes for humane and intelligent behavior?

A culture cannot be discriminatingly accepted, much less be modified, except by persons who have seen through it—by persons who have cut holes in the confining stockade of verbalized symbols and so are able to look at the world and, by reflection, at themselves in a new and relatively unprejudiced way. Such persons are not merely born; they must also be made. But how?

(emphasis added) In the field of formal education, what the would-be hole cutter needs is knowledge; knowledge of the past and present history of cultures in all their fantastic variety, and knowledge about the nature and limitations, the uses and abuses, of language. A man who knows that there have been many cultures, and that each culture claims to be the best and truest of all, will find it hard to take too seriously the boastings and dogmatizings of his own tradition.

Similarly, a man who knows how symbols are related to experience, and who practices the kind of linguistic self-control taught by the exponents of General Semantics, is unlikely to take too seriously the absurd or dangerous nonsense that, within every culture, passes for philosophy, practical wisdom and political argument. As a preparation for hole cutting, this kind of intellectual education is certainly valuable, but no less certainly insufficient. Training on the verbal level needs to be supplemented by training in wordless experiencing. We must learn how to be mentally silent, we must cultivate the art of pure receptivity. 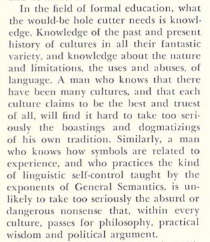