Theories of Evaluation, Values, and Meanings

Next, we’re going to consider how our experiences, under the influences of our neuro-semantic and neuro-linguistic environment, can determine the evaluations, values and meanings we create from those experiences. 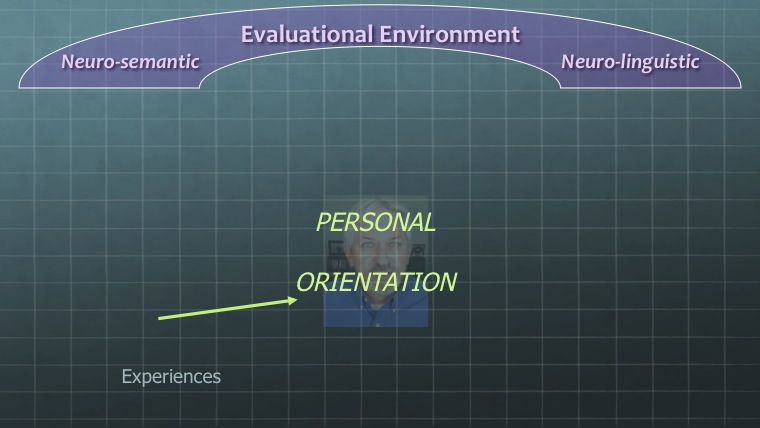 Throughout Korzybski’s writings, he refers to five “theories” related to General Semantics.

We addressed time-binding in Module 1. We also mentioned that the title of the “source book” for General Semantics is Science and Sanity; that the methods and applications of science are the foundation for human sanity.

We’ve covered evaluation in the context of the abstracting-evaluating process.

And we talked about meaning, especially in Module 3 on bypassing. As attributed to Charles Sanders Peirce, “you don’t get meaning, you respond with meaning.”

Korzybski coined a technical term for such inseparable-ness — non-elementalistic. He observed that one of the potential errors in our language behaviors was the ability to divide or separate in our verbal worlds of language what cannot be separated in our non-verbal worlds of experience. This error of separating in words what cannot be separated in ‘reality’ he called elementistic evaluating, or to nounify the process, an elementalism.

In this case, we have three different words, which can be defined in different ways. But on a neurological level … the level of actual living reactions … what we refer to as evaluations, meanings, and values are all bound together both as past and present experiences. 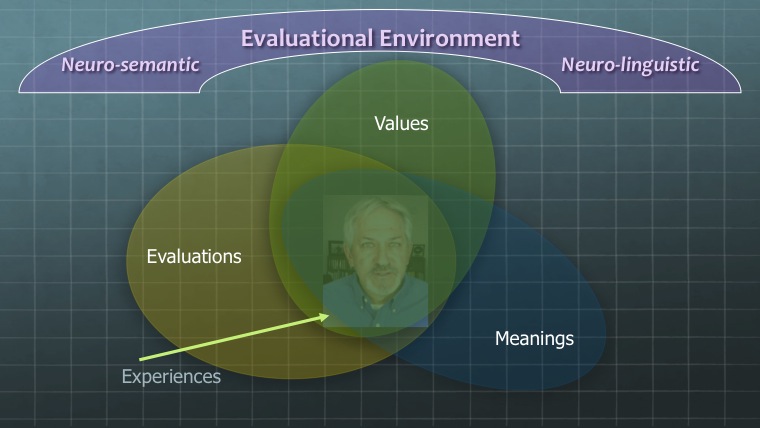 To illustrate, let’s return to the “you’ve got cancer” example of J.S. Bois from Module 1.

Imagine a scene in a hospital examining room. There’s a doctor, a patient, and the patient’s wife. A lab technician knocks on the door and enters, carrying a medical folder with the patient’s charts. He hands the folder to the doctor, nods to the patient and the wife, and leaves the room. The doctor silently looks through the pages of the chart. She takes a deep breath, gathers herself, and turns to the husband to say, “The tests confirm that you’ve got cancer.”

Can you envision in that scenario how different evaluations, meanings, and values are manifested by each of the participants?

To repeat another excerpt from Module 1 that I hope you might now find a little more meaningful:

In Week 5, we’ll address the “big picture” implications of [Korzybski’s] theories about the complex inter-relationships among evaluations, meanings, and values. Here are some examples that may give you a feel for what Korzybski was getting at:

The Tea Party in the United States evaluates the significance of U.S. debt and government spending levels differently from other political groups because of the meaning that Tea Partiers give to government debt based on their values.

People around the world hold different evaluations about global warming/climate change based what the phenomenon means to them and what values they hold. To the citizen of the Maldives, the threat of rising oceans bears meaningful consequences because they value their way of life (not to mention their actual lives), so they evaluate the evidence and forecasts about global warming one way. The owner/operator/customers of a coal-burning electricity plant in the remote southwest U.S. evalute the issue differently because their economic and political values are affected in different meaningful ways.

The ongoing tensions between India and Pakistan can be considered in terms of different evaluations based on conflicting values and meanings.

Can you think of any close-to-home controversies that exhibit the inseparable (or non-elementalistic) nature of evalutions, meanings, and values?

As we saw in Module 1, it’s important to acknowledge that when we refer to cognitive activities such as thinking, feeling, imagining, considering, etc., we are referring to neurological behavior that has a biological basis. Therefore if we want to  conscientiously improve our language behaviors, we need to understand something about how our brains work — at least according to the current brain science.

Five short video clips follow that relate how the processes of our evaluating reside in our brains.

From the Charlie Rose Brain Series, Anthony Movshon provides a functional overview of the cerebral cortex and describes the four lobes that comprise the cortex.

Also from the Charlie Rose Brain Series, the panel discusses how the brain is not hard-wired like a computer, and also mentions how dependent we are on our genetics and previous life experiences.

Along with Bill Gates, Paul Allen co-founded Microsoft. He now owns the Super Bowl champion Seattle Seahawks and the Portland Trailblazers National Basketball Association franchise. More importantly for our purposes, he has created the Allen Institute for Brain Science. (Christof Koch from the Module 1 afterimage demonstration is the Institute’s Chief Scientific Officer.) Two weeks ago Allen sat down with Charlie Rose to talk primarily about the Super Bowl, but he also discussed his Institute and related this comparison of the brain to a computer.

During an interview to promote his 2012 book, The Age of Insight: The Quest to Understand the Unconscious in Art, Mind, and Brain, Eric Kandel discussed his approach to studying the role of the beholder’s response to art — specifically, portraiture.

Walter Mischel (of the Marshmallow Experiment in Module 1) and Daniel Kahneman discuss their two schemes for characterizing the integration of the cortex and the amygdala. Mischel uses the metaphor of hot and cool systems to compare the two, while Kahneman refers to fast and slow.

Note how similar their descriptions are to what Korzybski, in 1941, observed about the interaction of the cortex and what was then referred to as the thalamus.

If we orient ourselves predominantly by intension or verbal definitions, our orientations depend mostly on the cortical region. If we orient ourselves by extension or facts, this type of orientation by necessity follows the natural order of evaluation, and involves thalamic factors, introducing automatically cortically delayed reactions . In other words, orientations by intension tend to train our nervous systems in a split between the functions of the cortical and thalamic regions; orientations by extension involve the integration of cortico-thalamic functions.

Orientations by extension induce an automatic delay of reactions, which automatically stimulates the cortical region and regulates and protects the reactions of the usually over-stimulated thalamic region.

What was said here is elementary from the point of view of neurology. The difficulty is that this little bit of neurological knowledge is not applied in practice. Neurologists, psychiatrists, etc., have treated these problems in an ‘abstract’, ‘academic’, detached way only, somehow, entirely unaware that living human reactions depend on the working of the human nervous system, from which dependence there is no escape. No wonder ‘philosophers’, ‘logicians’, mathematicians, etc ., disregard the working of their nervous systems if even neurologists and psychiatrists still orient themselves by verbal fictions in the ‘abstract’.

I met Laura Bertone twenty years ago this summer at my first general semantics seminar-workshop at Hofstra University in New York. We served together as trustees for the Institute of General Semantics for several years.

In 2006, Laura published a wonderful book that serves as both a textbook and a memoirs, of sorts, that contains illustrative examples from her career as a “Paris-based conference interpreter.” That’s how the book jacket describes her profession. I prefer to think of it as “simultaneous translating” which, to my monolingual mind, is almost akin to magic.

The book is The Hidden Side of Babel: Unveiling cognition, intelligence, and sense . I’ve selected an excerpt from a chapter in the book titled “The Inner Interpreter” (pdf) for this module. I believe it reinforces several important points about how, even within one language, we have to interpret or translate in order to evaluate and understand.

Example: What do these pictures mean?

To illustrate the interplay of evaluations, meanings, and values, consider the following photos in terms of these questions: 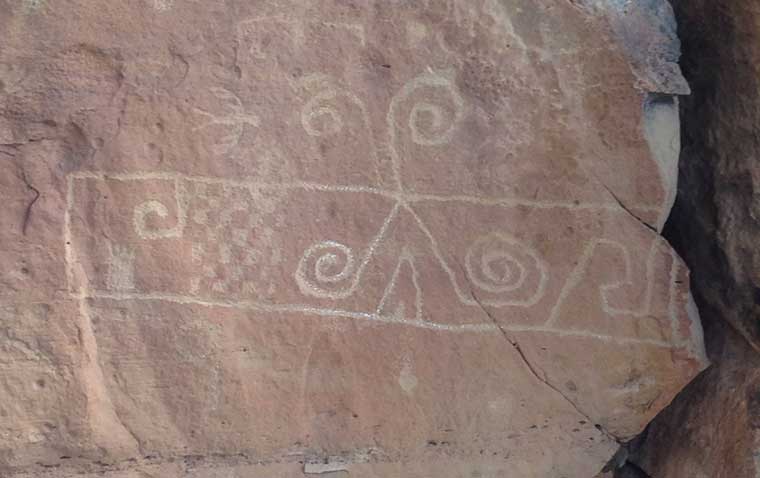 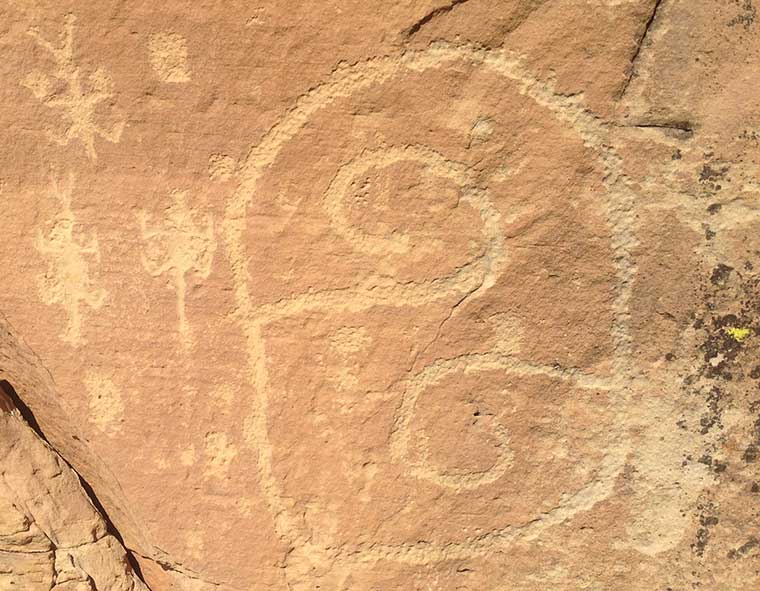 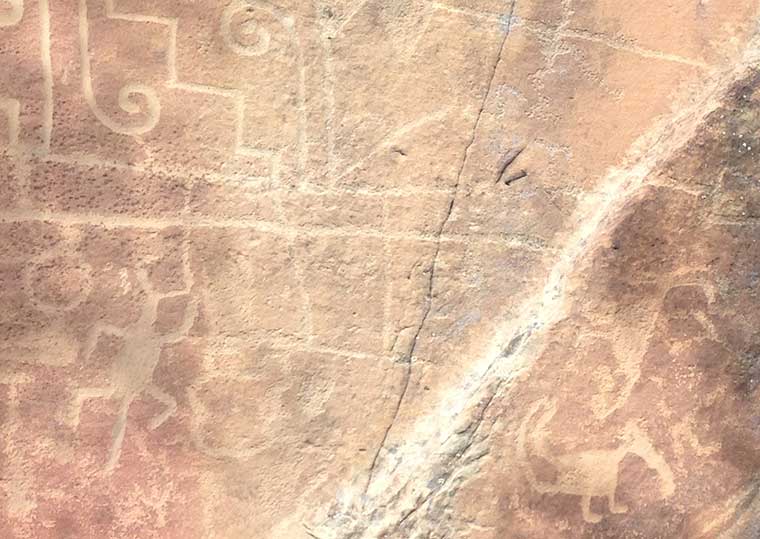 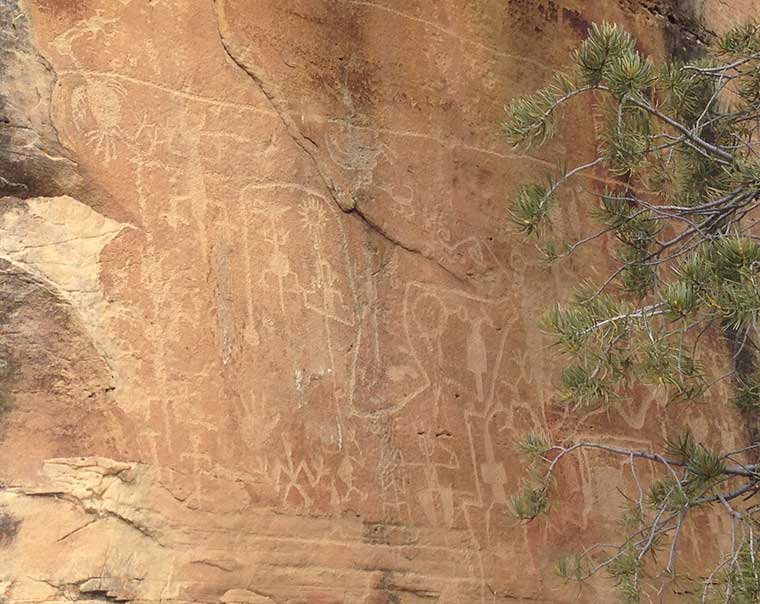 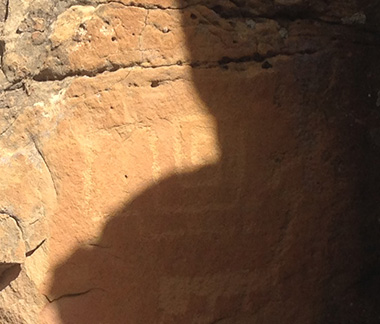 I took these photos this past December about 30 miles from where I live in western New Mexico. These are rock drawings known as petroglyphs, carved by the ancient inhabitants of this area.

Let me tell you a little more about the last four images that depict the square spiral shape. I took these four photos on the day after the winter solstice, between 11:58 and 12:03.

What does that additional information mean in terms of how you evaluate these photos and what they depict?

I think it’s reasonable to infer that, in the case of the square spiral, the specific location and size of the spiral serve a deliberate purpose. Combined with the L-shaped shadow of the overhanging rock, this spot marks the highest point of the sun on the shortest day of the year.

Considering how many years of observations it must have taken to determine where the L-shaped shadow would fall on this once-a-year day, this must have meant something special to the engravers. They must have valued this specific time.

Does this additional information make any difference in terms of what this means to you?