5 – Who rules your symbols?

General Semantics: An Approach to Effective Language Behavior was developed and presented on the Canvas Network by Steve Stockdale, Mary Lahman, and Greg Thompson. It is reproduced here under terms of the Creative Commons Share Alike License as published on Canvas Network from 13 January – 24 February 2014.

To this point in the course, we’ve covered:

We ought to easily recognize, then, that ancient notions such as objective or absolute reality do not accurately reflect the limitations of our nervous systems as they interact with the outside world. Therefore language structures, patterns, or terms that rely on this false-to-fact notion that what I experience (or say) “is” the same as what exists “out there” in the world misrepresent, mislead, and misinform. The fact of the matter is that the ‘real world’ is to a large extent unconsciously built up on the language habits of the group … We see and hear and otherwise experience very largely as we do because the language habits of our community predispose certain choices of interpretation. — Edward Sapir (Carroll, 1956, p. 134) [emphasis added]

In this module, Who Rules Your Symbols? led by Steve Stockdale, we’re going to try and integrate what we’ve learned so far by discussing the implications of two statements from Science and Sanity. 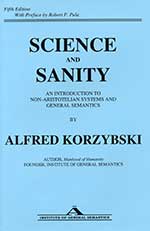 The analysis of … living reactions is the sole object of general semantics … (Korzybski, 1994, p.xli)

The affairs of man are conducted by our own, man-made rules and according to man-made theories. Man’s achievements rest upon the use of symbols. For this reason, we must consider ourselves as a symbolic, semantic class of life, and those who rule the symbols, rule us. (Korzybski, 1994, p. 76) [emphasis added]

The objectives for Module 5 include:

I’d like to return to one of the questions posed in the Point of View Survey explanation: how has one acquired this point of view (or orientation)?

Let’s consider that your general orientation (or point of view) constitutes a living reaction and is therefore worthy of analysis.

Here’s how I would analyze this question.

Environment and Orientation of a Plant

First, let’s take it out of the human realm and look at a plant.

[Aside: We seem better able to scientifically analyze plants and animals than we do ourselves or our fellow humans.] 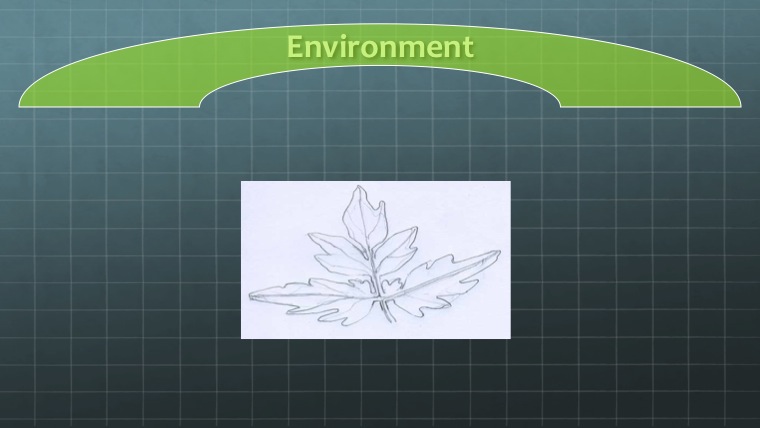 A plant lives within a defined environment. 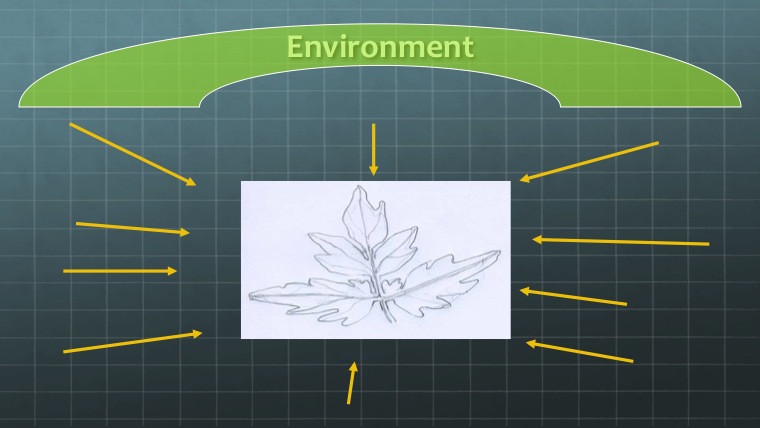 A plant grows as a function of different environmental factors or influences. 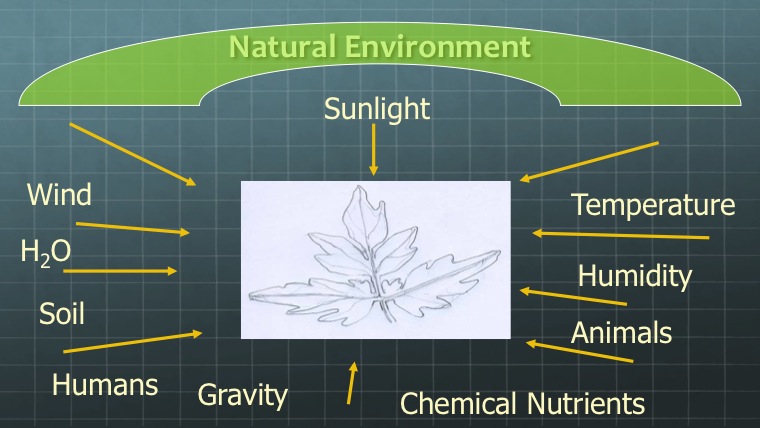 A plant grows as the result of internal processes that absorb or react to the environmental influences. 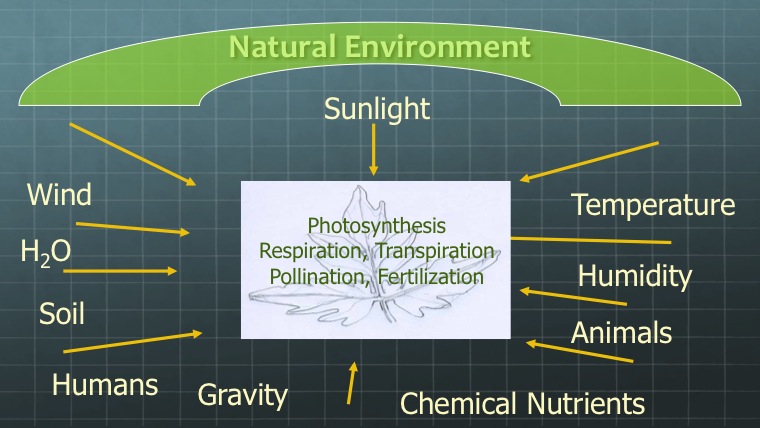 Tropism is a term that’s used to refer to the tendency of plants to respond according to the different types of environmental stimuli, such as water, gravity, wind, sunlight, etc.  For the purposes of this explanation, we can say that a plant orients itself as a result of the sum total of all these environmental factors (tropisms). 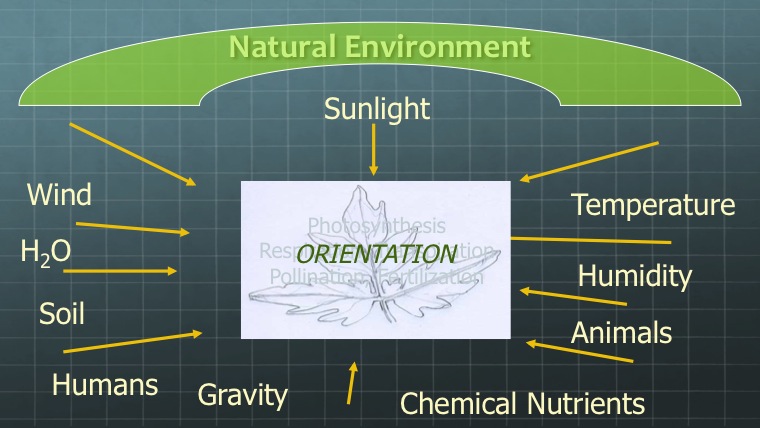 Environment and Orientation of a Human (in this case, me)

Now let’s jump to the human realm and consider the environments that influence us, specifically in the context of the orientation question … how has one (in this case, me) acquired his (my) orientation or world view? 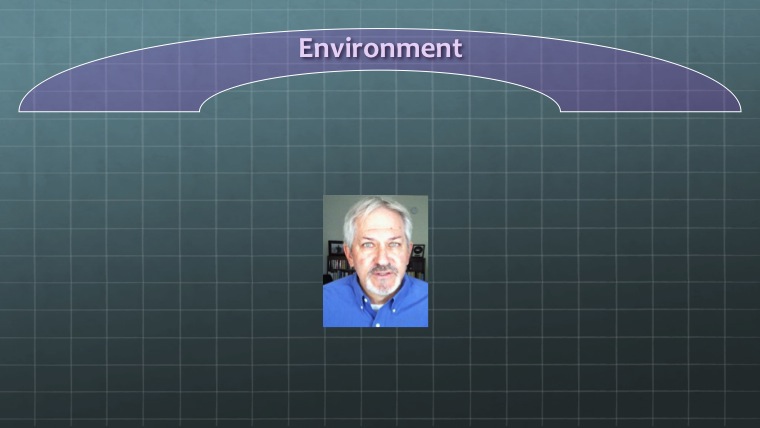 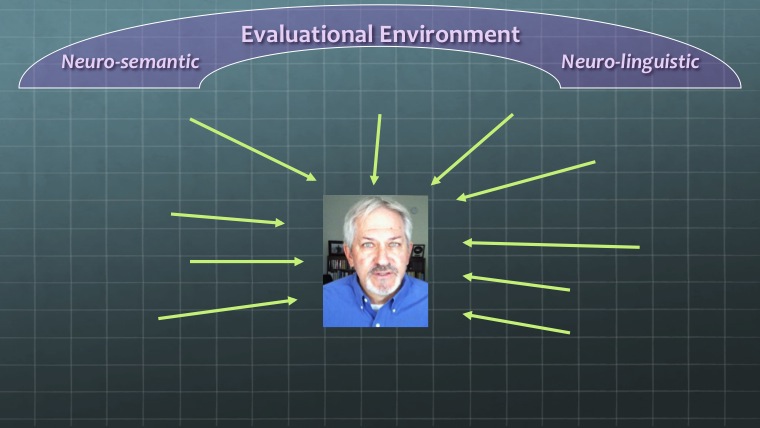 [General Semantics] recognizes neuro-linguistic and neuro-semantic environments as unavoidable conditioning environments, and considers ‘mental’ illness, science and mathematics as types of human reactions. We discover that all forms of human reactions involve some common mechanisms which work automatically for the benefit or detriment of humanity. (p. 297, CW, General Semantics, Psychiatry, Psychotherapy and Prevention, 1940)

If we stop to reflect, we must face the fact that every human being is born into a neuro-linguistic and neuro-semantic environment from which there is no escape. At present sciences are taking care of deadly environmental dangers such as plagues, epidemics, factory conditions where harmful chemicals are used which slowly kill off the workers, etc. But the academic linguists in their detachment and interest in abstract verbiage somehow disregard our neuro-linguistic and neuro-semantic environments as environment, and therefore do not (and, perhaps, could not) produce any constructive practical results in building up sanity in education, and so ultimately in human living. It is true that these academicians and verbalists would have to know more about living human reactions. They would have to study not only neurology, psychiatry, general semantics, verbalisms written or spoken in hospitals for the “mentally” ill, etc., but also the pathological reactions found in politicians, journalists, etc., and even in educators and scientists. (p. 365, CW, Foreward to LHIHA, 1941)

[Listing errors of omission] The disregard of the neuro-linguistic and neuro-semantic environments as an environment unique for our symbolic class of life. These are no more avoidable factors than air or water. They may have disastrous effects on us, and we know enough about environmental factors, for instance, in occupational diseases to understand the gravity of such disregard. (p. 379, CW, Foreward with M. Kendig to A Theory of Meaning Analyzed, GS Monographs, Number III, 1942, pp. vii-xvi.)

You can see that the number of potential neuro-semantic and neuro-linguistic factors or influences are indefinitely-many. 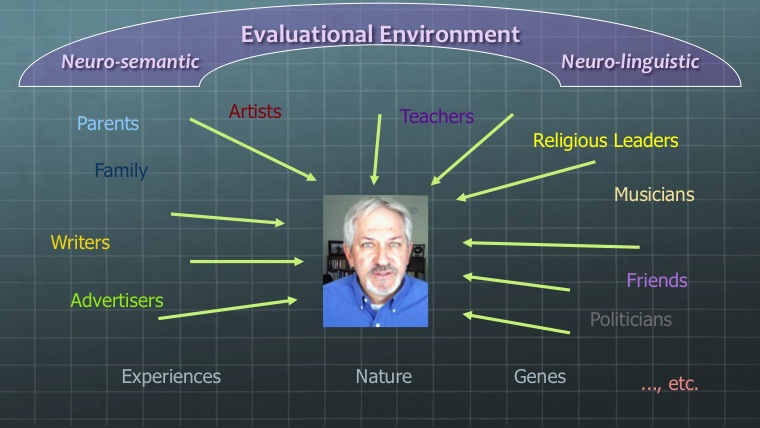 While this slide emphasizes the symbolic influences, it’s important to not overlook the biological influences that certainly affect our neuro-semantic neuro-linguistic environments — specifically, our past experiences and genetic expressions.  The sum total of these neuro-semantic and neuro-linguistic influences, comparable to the plant’s tropism effects, can be considered as our (or in this case, my) personal orientation. 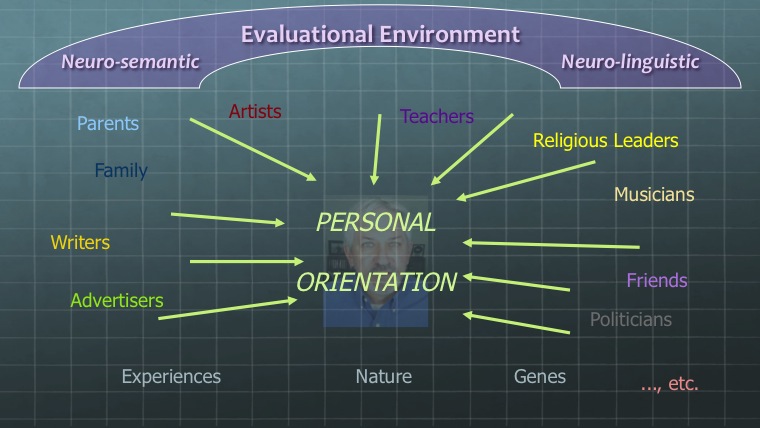 And from this orientation, I evaluate, react, and behave, as reflected in my responses (or you could say my evaluations) to the statements on the Point of View survey.