Read an English translation of an original Gujurati language news article.
Read an account of one presentation here in the 20 November edition of the daily newspaper DNA (Daily News & Analysis). 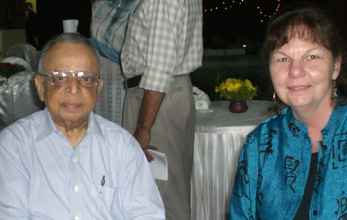 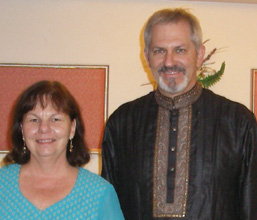 Thanks to underwriting from Mr. Balvant K. Parekh, Chairman of Pidilite Industries Ltd, IGS Board President Andrea Johnson and I spent more than two weeks in India to introduce General Semantics. We gave seminars and workshops at seven different venues in Mumbai, Ahmedabad, Anand, and Vadodara, to a total audience of about 350 individuals.

As of 14 Nov 2020, this video is unavailable due to webhost migration.

The following are some key points regarding our host in India, Mr. Parekh, and the circumstances of his invitation to us.

His motivation to organize this trip to “bring general semantics to India” came from reading the 2006 General Semantics Bulletin and noting that he was the only IGS member in India.

His initial invitation asked for one person. He agreed to our counter-proposal to send two persons, with me traveling at my own expense.

He came to general semantics about 25 years through reading ETC: A Review of General Semantics. Much of his extensive knowledge and understanding of GS, which he demonstrated privately and during his remarks at each of the venues, came from reading articles in ETC.

A native of Gujarat, Mr. Parekh has long lived according to the Gujarati tradition: “If you get what you like; do not keep it, rather share it.” So inspired, in 2003 he began compiling and publishing his own aperiodic “journal” similar to ETC in which he collected interesting articles, stories, quotations, etc. To date he’s published seven issues and sent approximately 1200 copies of each issue to a distribution list of friends, family, colleagues, and anyone who requests a copy. Every issue has a section dedicated to General Semantics in which he’s reprinted 4-5 articles from ETC. Perhaps a dozen people who attended the 3-day workshop in Baroda mentioned to us that they learned of GS for the first time through Mr. Parekh’s free journal.

The company he founded, Pidilite Industries, Ltd, is ranked by the Economic Times of India as the 131st largest public company in India, with annual sales of over $350M. Their core business is adhesives, developing the “Elmer’s glue” of India, as well as an entire line of industrial bonding materials. His daughter Kalpana proudly related that, although he didn’t have a chemical background, he mixed the first batch of Fevicol (their brand name) in their home bathtub. He then saw to it that his one younger brother and one son earned graduate degrees in Chemical Engineering (from the U. of Wisconsin in Madison). They and most of the family’s sons continue to manage and direct the affairs of the diversified company.

Mr. Parekh developed Parkinson’s seven years ago. He’s done a lot of personal research about the disease and has access to the very best medical attention, so he and his family are optimistic about his condition and prognosis. Andrea and I had little trouble understanding his bright, enthusiastic English.

He was treated as something like a “revered godfather” everywhere we went. Several people went to lengths to explain what a wonderful, caring, and benevolent “philanthropist” he was. Among them:

He and his staff arranged for us to speak at seven different venues to a total audience of about 350 people. At each venue, Mr. Parekh (presumably) arranged for tea, snacks, and either lunch or dinner to be served to all attendees, including a very nice buffet dinner at a fine hotel in Baroda on the second night of the workshop. The venues included:

Mr. Parekh, with my permission, arranged to make copies of Ken Johnson’s General Semantics: An Outline Survey and provided a copy to everyone at each of the venues. Additionally, for the Baroda workshop, Prof. Prafulla Kar (workshop organizer) published bound volumes of the eleven articles I suggested as pre-reading for the participants and distributed it to all registrants about six weeks before the workshop.

Through the Pidilite Marketing/Communications manager, Mr. Parekh arranged extended interviews for us with reporters from four newspapers: The Hindustan Times (me, Andrea was sick); the local Gujarati-language newspaper (Andrea and me); The Times of India (Andrea, I was sick); and The Economic Times of India (Andrea, I was sick). The reporter for the Hindustan Times attended the entire presentation I gave at the Bhavans Culture Center and even asked questions before the group.

Mr. Parekh is obviously passionate about a lot of things, and general semantics is just one. He is also quite familiar with Dr. Albert Ellis and Rational Emotive Behavior Therapy and was very pleased to receive the October issue of ETC while we were there. At each of the venues we spoke (for either 2- or 4-hour programs), we found the audiences prepared, engaged, genuinely interested, and in some cases almost ‘absorbent’ like sponges. Those who confessed knowing something about GS knew so only through the efforts of Mr. Parekh. They obviously put a lot of credence in the fact that this was something that he thought was important.