Is Ella Latimer Henry a child of John and Elizabeth Latimer?

This is a long page. Jump to:

If you have any information, comments, questions, or suggestions to offer regarding the materials on this page, please contact me.

12 Nov 2019: With the reassuring feedback from the Genetic Affairs User Group on Facebook, I’m assuming that my theory about Ella Latimer Henry is correct. Now my attention and efforts will be toward researching the circumstances that may explain why she has not been included in all known family trees of John A. & Elizabeth (Eliza Snoddy) Latimer.

The parents of Ella Latimer Henry (a 2nd great-grandmother) have been unknown to her descendants (see top part of the pedigree chart below). Based on AncestryDNA test results of her descendants that match multiple descendants of the families descended from John A. Latimer and Elizabeth Snoddy (see the bottom below-the-line part of the pedigree chart), this page presents support for the hypothesis that Ella Latimer Henry must be closely related to the John & Elizabeth Latimer family — most likely their daughter. For reasons and circumstances not currently known or explained, she has not been documented as part of this family.

What is known about Ella Latimer Henry

P.S. As further confirmation, here are the edited results of a GeneticAffairs.com AutoCluster analysis. The lines noted as “Ella Cousin-” are the shared matches above the dotted line above (i.e., shared ancestors descended directly from Burr Henry and Ella Latimer). The lines shown as “J&L Latimer-” show the descendants of John and Elizabeth Latimer. The Genetic Affairs algorithms “cluster” shared matches into different colored blocks that, in the best case, point to a Common Ancestor. In this case, the results are pretty conclusive that these matches all descend from John and Elizabeth Latimer. 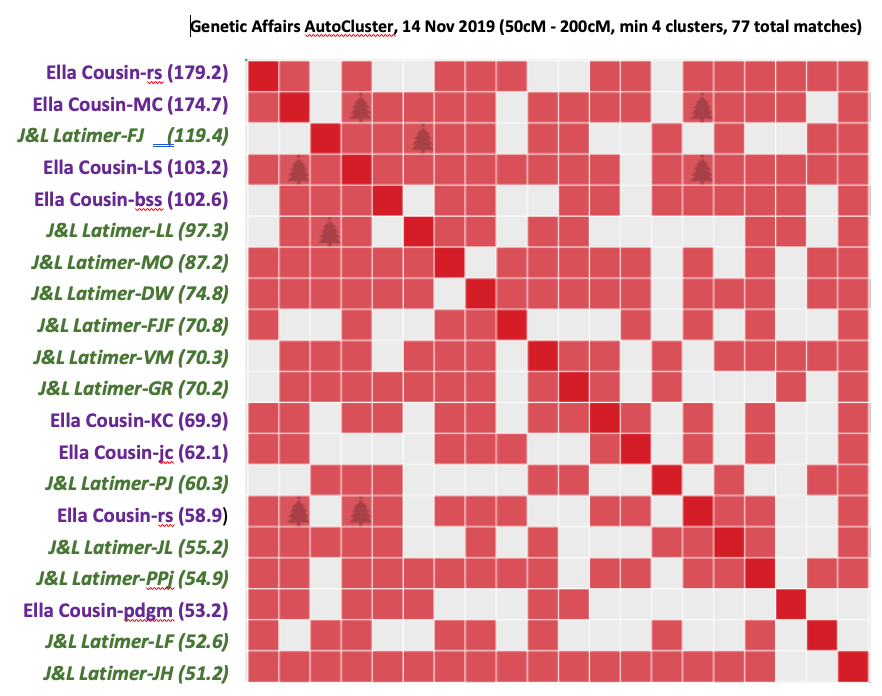