A Crop of Enlightened Perspectives 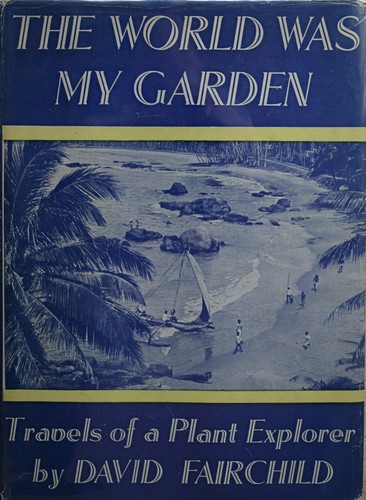 Excerpts from David Fairchild’s Memoirs, The World Was My Garden (1938). Fairchild was named one of the Honorary Trustees of the Institute of General Semantics by its founder, Alfred Korzybski. The two men met in Washington, D.C. in the early 1920s.

Read Wendell Johnson’s story of how he became acquaintances with Fairchild and some of the background as to how and why Fairchild was interested in General Semantics and Korzybski.

More about David Fairchild can be found online, including Wikipedia and the Fairchild Tropical Botanic Garden in Florida.

[on his own home garden] I was appalled by my abysmal ignorance of practical agriculture when I started to create my own home. I soon discovered that through all my years of association with professors of horticulture, agricultural colleges, and experiment stations, I had developed a blind spot towards the practical formulae of such an immensely simple thing as the making of a flower or vegetable garden. Marian, of course, depended upon me for all this knowledge which I had only theoretically, and in gardening you may as well not know anything at all as to know it in a theoretical way. If you are not actually sure exactly how to do a thing in gardening, you do not know how to do it, and that’s that! (p. 316-317)

[in Panama, regarding the threat of malaria] In 1899, the French attempt to build the Canal had collapsed, but as yet the yellow fever mosquito had not been suspected of carrying the disease. The old French hospitals were still standing and, in the open space beneath them, on the ground lay great piles of iron crosses imported from France, each with a serial number on it ready to mark the grave of some patient. In fact, all the patients were measured for coffins immediately after they were admitted to the hospital. Practically none ever emerged alive.

The Sisters of St. Vincent, who were in charge of the hospitals, kept potted plants on the window-sills to make the wards more cheerful. Under the pots were saucers and, as the plants were watered daily, water always stood in the saucers. In consequence, mosquitoes bred there, and fed on the yellow fever patients, thus becoming infected themselves with the parasite. In turn they infected nearby patients who might otherwise have escaped.

in Spain, describing a driver: I hired a driver who bore an unpleasant resemblance to my idea of a brigand [bandit or robber]. Although I did not like his looks, he was pleasant enough and during the drive up the mountainside regaled me with talk of the bull-ring… [after an afternoon of cutting and collecting specimens, returning after sunset] … As we approached the narrowest part of the defile where the cliffs shut out even the faint light of the rising moon, stories of the bandits in that region began to surge through my memory. At that moment, my driver reached behind him, pulled out a gun and flourished it in my face saying something in Spanish which I could not understand. It was a perfect spot for a hold-up, and I felt a nervous chill run down my spine. I never carried firearms, but flashed my heavy, nickel-plated tripod in the moonlight, hoping that he would think me armed also. Nothing further happened and before we reached town I decided that, far from his having any idea of robbing me, he had meant to reassure me and tell me that he would protect me if necessary. (p. 201)

The human mind prefers something which it can recognize to something for which it has no name, and, whereas thousands of persons carry field glasses to bring horses, ships, or steeples close to them, only a few carry even the simplest pocket microscope. Yet a small microscope will reveal wonders a thousand times more thrilling than anything which Alice saw behind the looking-glass. (p. 11)

The morning after my arrival (Muenster, Germany), I was unlimbering my microscope when the Professor’s “Diener”, a devoted servant and assistant, came marching in. In his hands, held as proudly as a flaming Christmas pudding, was a plate piled high with horse-dung. With a flourish, he placed it on my table, covered it with a bell jar, and assured me that it was completely fresh and absolutely perfect in every way. Incredible as it may seem, after my first feeling of revulsion had passed, I spent three of the most entertaining and instructive weeks of my life studying the fascinating molds which appeared one by one on the slowly disintegrating mass of horse-dung. Microscopic molds are both very beautiful and absorbingly interesting. The rapid growth of their spores, the way they live on each other, the manner in which the different forms come and go, is so amazing and varied that I believe a man could spend his life and not exhaust the forms or problems contained in one plate of manure. (p. 55)

[circa 1909, in England] Of course I went out to Kew Gardens and renewed my acquaintance with Sir Thistelton Dyer and Sereno Watson, and filled a notebook with names and suggestions for new Chinese plants to introduce.

A rose espaliered against a south wall greatly took my fancy as it was covered with great, single white blooms. It was Rosa brcteata, the Macartney rose from South China. Its thick, dark green leaves and densely tomentose stems form a striking background for the brilliant white flowers. I took a plant home with me and was delighted when it bloomed on a trellis at “In the Woods” [the Fairchild’s home in Maryland].

After it had grown there for several years and I had proudly shown it to many of my friends, I happened to be in Louisiana visiting Ned McIlhenny. He was driving me across the low, flat delta region of the Mississippi when I saw in the distance a long, hedgelike mass of bushes, a quarter of a mile long and perhaps forty feet across. I could not imagine what it was.

‘Oh, that,’ Mr. McIlhenny said, ‘is the worst weed we have down here. That’s the Chickasaw or Macartney rose, introduced by the early settlers some time in the seventies I believe. Since its introduction it has grown wild and covers large areas of land and has been impossible to eradicate.’

I gasped, for I realized that I had been tenderly nursing the worst weed of Louisiana. This rose, introduced into England in 1753 and named after Lord Macartney, behaves in a ladylike manner in more northern climates. (p. 360)

[in Mozambique] I wandered about the town until dark, and on the edge of the village came across a group of black men dancing in the moonlight on the dusty roadway. They were abandoning themselves to a kind of instinctive rhythm as they clapped their hands and stamped their big bare feet on the hard ground as naturally as the monkeys in the forest swing by their tails from the forest trees. I, with generations of Calvinism and Quaker creed behind me, stood fascinated, understanding for the first time that perhaps the instinct to dance is so deeply rooted in the makeup of the human animal that the puritanical idea of eliminating it is more unnatural than the dancing. (pp. 272-273)

[circa 1899 in Peru] Mr. Lathrop told me that during a former trip to Peru he had visited the high Andes and had been much impressed by the way the natives carried heavy loads up the mountainsides, seemingly without exhaustion. He found that they all chewed the leaves of a plant called Coca (Erythroxylon Coca) which they used either fresh or dried, mixed with a small quantity of ashes. To the use of this leaf, they attributed their ability to carry loads for long distances in high altitudes. Since no one could tell him its chemical content, Mr. Lathrop sent a quantity of the leaves to the Academy of Sciences in San Francisco for analysis, with a description of its use. Much to Mr. Lathrop’s disgust, nothing was ever done in the matter. He was particularly annoyed later when a German chemist isolated the useful drug cocaine from coca leaves, a drug which soon became the best know alleviative of human suffering.

It was a bitter disappointment to Mr. Lathrop that he had not had the satisfaction of bringing cocaine to public notice. Whenever I gather the red berries from my coca bush, I am reminded of Mr. Lathrop’s first introduction. (p. 129)

[in China]
These truck gardens of a city of 2,000,000 people did not contain a single vegetable with which we are familiar in America. The people, apparently well nourished, live on an entirely different diet from that which we consider necessary for health and happiness. Even their grains differ from ours. South of the Yangtse, the people consider their daily dish of rice more essential to their well-being than an American does his loaf of bread. In southern China, Indian corn is practically unknown, wheat a luxury, and, except on rare occasions, no one has either a beefsteak or a mutton-chop. Northern China is not a rice-producing country and there they have some corn and wheat. Throughout China they have pigs, of course, chickens and ducks; but even the pigs appear strange, because they have been bred to be sway-backed and have enormous bellies. This, I was told, was to increase the amount of bacon. Bacon is important as it is an ingredient of the chow mein, the most popular dish of the Chinese menu.

Butter and cheese were unknown outside the foreign settlements, and the only milk sold, except to foreigners, was human milk. There were no beef cattle, and few work animals, buffaloes only, for human labor was cheaper. The sheep were prized for their wool, and seldom killed for meat.

Professor King (Franklin H. King’s, in Farmers of Forty Centuries) has demonstrated that, according to recent Rothamsted experiments, whereas “only four pounds out of each hundred of the dry substances eaten by cattle are transformed into human food, and five pounds of the dry substances eaten by sheep, eleven pounds in each hundred are transformed into human food by swine.” In view of these figures, which have only recently been established as scientific facts, it is significant that the Chinese long ago discarded cattle as meat producers, used sheep more for their pelts and wool than for food, while retaining the swine as the one animal used in the role of middleman transforming coarse substances into human food. (pp. 219-220)

On my way up to San Francisco, I stopped in Fresno to see George C. Roeding, who had a large orchard of Smyrna figs. For many years the trees had refused to bear. Suddenly they began to produce good crops of fruit, due to the introduction of the blastophaga, a tiny wasp. The flowers of the fig are inside the fruit, with but a tiny aperture of the edible figs, thus carrying the pollen from one flower to another; without its services the Smyrna fig refuses to fruit. The romance of the introduction of this wasp, and its establishment in California, is one of the most entertaining stories in the annals of horticulture. (p. 210)