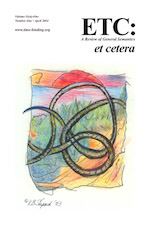 Twenty-seven years ago, this journal experienced a different type of transition. The late Neil Postman, remembered in the previous issue of ETC, began his 10-year editorship of this journal with a clearly articulated point of view in the first of his ‘themed’ issues, “The Roots of Fanaticism.”

He diagnosed that, in 1977, there existed a “state of mind which banishes reason and generates frenzy, [that] has accompanied mankind throughout our history and gives no sign that it is wearying of the journey.” He observed that this “state of mind” had produced “the odor of a kind of intellectual decadence that some of us have smelled before.”

Postman predicted that “the study of symbolic processes will be a pre-eminent intellectual enterprise for the remainder of this century.”

To whatever degree ‘we’ have, since 1977, engaged in “the study of symbolic processes,” it doesn’t appear to me that we’ve succeeded in diluting what Postman sniffed as the “odor of a kind of intellectual decadence.” Indeed, I contend that this ‘odor’ lingers, wafts and seeps even more persistently and pervasively in 2004 than in 1977.

Consider the issues that, on a given day, dominate our national interest as evidenced by newspapers, media talk shows, and the Internet. Many of these current (March 2004) issues represent deeply-rooted conflicts that concern “symbolic processes” and the “intellectual decadence” of rulers and/or the ruled, who lack the means to differentiate symbols as symbols, rather than things, values, or truths.

It seems to me, then, that our susceptibility to all things symbol-related, and our vulnerability to those who manipulate the symbols (and labels, words, morals, attitudes, beliefs, etc.) has not ameliorated significantly in the quarter century since Postman’s editorial. We still, as individuals, groups, and cultures, exhibit behaviors that amount to “eating the menu,” so to speak. We still confuse flags with freedoms, bumper stickers with beliefs, and appearances with ‘realities.’

So what, then, about the relevance of general semantics? Does our discipline bring anything to the table of “intellectual enterprise” for this 21st century? You may correctly presume that I, as the new Executive Director of this ‘new’ organization, would answer in the affirmative.

Twenty-seven years ago, Neil Postman wrote about the consequences of the “symbolic stench” (my term) that pollutes what passes for contemporary cultural, political, and social discourse. Alfred Korzybski warned us over seventy years ago that “who rules the symbols rules us.” The current ‘issues’ that exist on verbal and symbolic levels will divide us politically in this election year, even as our living existence is threatened on quite visible non-verbal levels in New York, Baghdad, Madrid and other cities inevitably to be named later.

Our challenge as students, practitioners, publishers and advocates of an extensional, scientific orientation is to forthrightly address the threats to sane, time-binding behavior as we can, using the methods and tools at our disposal.

Otherwise, we will continue to be fed menus, and eventually not object to the taste.