My roommate from the Air Force Academy, K.C. Steinbaugh, died in February 2012. After his memorial service, I felt compelled to create this tribute to my fellow CS-39 Campus Radicals, and to especially K.C. and Danny Sawyer, who died in 2006. Scroll down for K.C.’s obituary I wrote for Checkpoints, the Association of Graduates quarterly magazine.

Just a few months before our 40th reunion in 2016, we learned that a third Campus Radical, Randy Richey, had died (his obituary). Randy and I were in the same squadrons from the beginning – Guts! in Basic Cadet Training, CS-31 Grim Reapers as doolies, and then CS-39 Campus Radicals (Right On!) as upperclassmen. 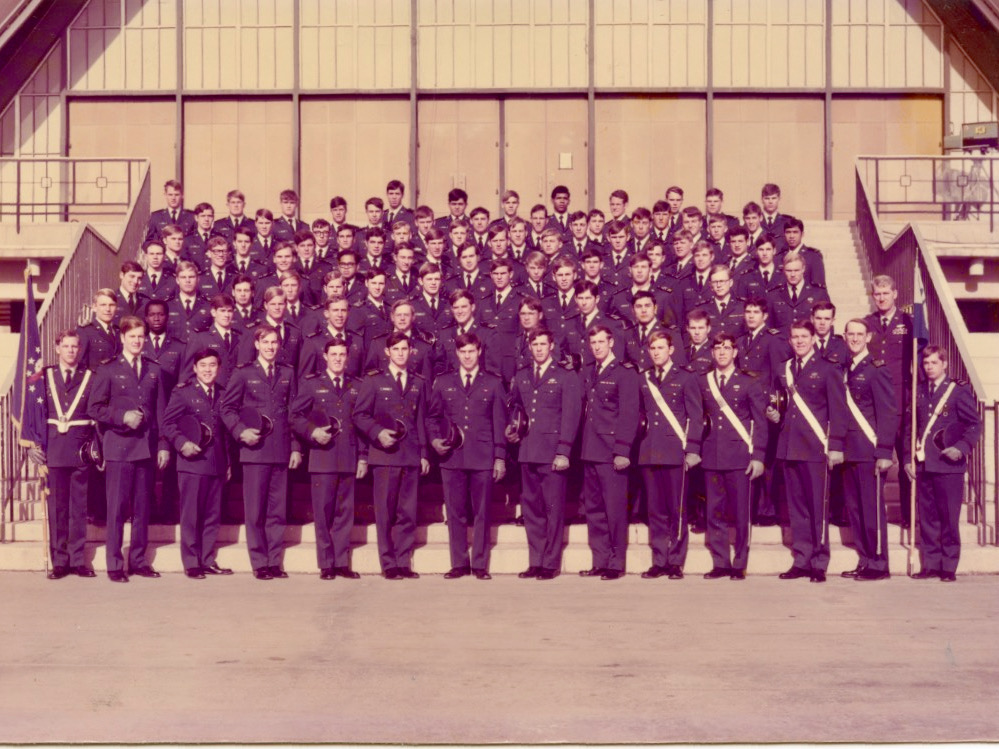 The film footage from our graduation and hat toss was taken off of YouTube, apparently posted by an anonymous classmate.

The ’76 Campus Radicals were:

Note: It goes without saying that all of us also answered to our last names, with or without descriptors.

I submitted the following to Checkpoints, the Association of Graduates quarterly, regarding K.C.

Keith Charles (K.C.) Steinbaugh, Spirit of ’76, died on February 22, 2012, in Allen, Texas. Just months earlier, he began to deteriorate from good health to exhibiting worrisome symptoms. He was eventually diagnosed with the very rare (as in one-in-a-million rare) and fatal neurological disease known as Creutzfeldt-Jakob Disease (CJD).

K.C. was an accomplished high school athlete and scholar from Pasadena, CA. He ran track during his first two years at the Academy. He was in CS-23 as a doolie, then CS-39 Campus Radicals during his upperclass years. He was the only guy I roomed with more than once at the Academy, so I’ve always considered him “my roommate.”

He was passionate about cars, stereos, and just about everything related to electronics. He talked endlessly during our second class year about the turbocharged Cosworth Vega, but then he bought an old, powder blue, renovation-worthy Mercedes 280SL. He had a pair of Bose 701 directing reflecting speakers which, of course, were (usually) completely wasted in a cadet dorm room.

K.C. kept a stack of automotive and electronics magazines in the room. He was usually researching something. As an electrical engineering major, he wanted to understand how things worked. He was a good athlete. I remember many late afternoon treks from the gym back to the far reaches of 39th squadron after playing tennis with him. I think he was the first person I knew who converted from a wood racket to the Wilson T-2000 aluminum model.

After graduation he attended Undergraduate Navigator Training at Mather AFB, CA. He was assigned to C-130s with the 62nd Tactical Airlift Squadron at Little Rock AFB in 1977. He and his crew won the award for “Best C-130 Airdrop Crew in MAC” at the prestigious air mobility exercise known as Volant Rodeo in 1981.

K.C. completed his Air Force service in 1982. He and his wife Liz, a kindergarten teacher from nearby Benton, AR, moved to Plano, TX. They had three sons — Jordan, Jason, and Jeff. K.C. worked as a quality/reliability engineer and program manager at several companies in the Dallas area including Texas Instruments, Amtech, and Raytheon.

Jordan, his oldest son, spoke simply and eloquently during the memorial service. I was movingly reassured that the traits Jordan referred to in remembering his father were unmistakably the same traits I recalled about my roommate — quiet but selectively passionate with a laser-like and fully absorbing focus, studious, thorough, competent, committed, and genuinely kind. Fortunately for me, however, his interest in reptiles did not manifest itself until sometime after graduation.

It’s fitting that, given his commitment to research and his engineering sense for wanting to understand how things work, he donated his body to medicine so that more could be learned about the rare disease that claimed his life so prematurely.

K.C. Steinbaugh is survived by his wife Liz, sons Jordan, Jason, and Jeff, and siblings Sherrie, Christine, Patti, and Ken.

Here’s a clip from the Charlie Rose Brain Series with Nobel Laureate Dr. Stanley B. Prusiner discussing CJD and its abnormal protein similarities to Parkinsons and Huntingtons diseases. The full episode is located at: www.charlierose.com.