About the World Around Us 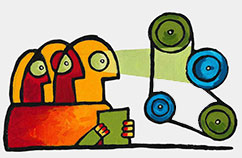 We can observe the world around us, and ourselves, from the perspective of a scientific attitude. We can observe, create theories or assumptions, test those theories, then based on results, apply, modify, or discard them. We get into trouble when we ignore this process and rely on unchallenged or untested assumptions, beliefs, or feelings. An important aspect of a scientific approach is predictability. From our day-to-day experiences, we gather information, form opinions and beliefs, gather more information, form more opinions and beliefs, etc. Does the information we gather from our daily experiences support our beliefs and opinions? Do we modify those beliefs and opinions when the ‘facts’ of our experiences warrant?

A scientific approach can be considered an investigative process in which one:

from Lecture by Steve Stockdale

from The Best Mind Since Einstein