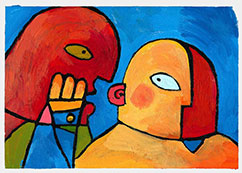 Every everyday language results from choices made by humans—some deliberate, some accidental, some arbitrary. No language can be considered inherent, or inerrant. Language constitutes one critical aspect of human behavior, perhaps the defining feature for humans.

Our languages ought to adapt to reflect the latest state of what we know about ourselves in our world.

Although we often hear that “words have power,” words in and of themselves are nothing more than abstract ideas or symbols. What we think of as “power” resides in the individuals who speak, write, hear and read the words, then act.

Words do not contain meaning. The “meanings” of words are specific to each individual who engages in a communicative exchange.A common source for misunderstanding is when a listener interprets the words of a speaker as if the listener were doing the speaking. If the listener cannot interpret what is said within that specific context, he risks not understanding what the speaker intends.There is a difference between knowing a word, vs. knowing something about what the word refers to.

We often confuse statements which sound like facts, as facts. Rather than maintain a sense of tentativeness and uncertainty, we’re quick to accept statements, comments, judgments, opinions, beliefs, etc., as facts or truth. This lack of discrimination, this disregarding of key differences, results in our acting and behaving as if we’re responding to facts, when we’re really responding based on assumptions, inferences, beliefs, etc.

Professor Irving J. Lee (1909-1955) of Northwestern University, proposed a high standard for considering something as a fact, vs. an inference:

To summarize how Professor Lee distinguishes between inferences and facts:

Inferences can be made anytime, about the past, present or future. Inferences go beyond what one has observed or verified, including speculation about what has, or might, happen, and oftentimes simply repeat what has been heard. Inferences must be considered in terms of degrees of probability or likelihood (might, probably, to me, etc.)

Facts can be made only after an experience or observation or after verification. Facts stay with, or not go beyond what was experienced or observed; i.e., facts do not include speculation, presumption of motivation or intent. Facts are as close to certainty as humanly possible to know; would you bet your life on it?

We often mistake inferences for facts, and then act upon these inferences as if they were facts. This invariably leads to confusion, misunderstanding, and in some cases, tragedy. We should apply Lee’s high standard to what we consider as a fact.

We are much more prone to see similarities than differences. This often results in our thinking in terms of categories, labels, and classifications rather than the specific or individual item we’re concerned with. This tendency to generalize, and difficulty in recognizing differences, leads to stereotyping, biases, and prejudices.

With language we can …

and, language also enables us to …

from The Best Mind Since Einstein, Richard Feynman ()

We should remember what Francis Crick observed in Astonishing Hypothesis: The Scientific Search for the Soul: The single most characteristic human ability is that we can handle a complex language fluently. We can use words to denote not only objects and events in the outside world but also more abstract concepts. This ability leads to another strikingly human characteristic, one that is seldom mentioned: our almost limitless capacity for self-deception.

What is “appropriate” language behavior?

We ought to properly integrate what happens outside of our skin with the we way we internally process, interpret and think about those happenings within our nervous systems. Similarly, it makes sense that we strive to properly integrate, or structure, our verbal language to appropriately represent the non-verbal events and happenings which are NOT words.

The map IS NOT the territory

Just as a well-drawn map depicts, represents, illustrates, symbolizes, etc., an actual geographic area, so should our language properly reflect that which it refers to — that which is NOT language. However, we often confuse the words we use with those ‘things’ the words refer to. We confuse the word with the thing; we mistake the map as the territory.

We do well to remember:

The subject/predicate grammar form misrepresents what we know goes on in the non-verbal world:

Roses appear red to me.

We tend to think in terms of opposites, or two-valued differences: right/wrong … black/white … good/bad … for/against …

In the non-verbal world around us, however, we seldom encounter such clear-cut differences. Instead, we actually experience things, events, happenings, etc., along a spectrum, or a continuum, with lots of ‘grey area’ between the ends:

Although we would immediately deny it, most of us react to word magic. We believe that if there’s a name for something, or a word for something, then that something must be ‘real’. Otherwise … why would somebody have gone to the trouble to make up the word?

This unrecognized, perhaps unconscious, belief in “word magic” has facilitated the continuation of myths, superstitions, hexes, curses, jinxes, etc. We talk about something as if it exists, and describe it in great detail with other words, and draw pictures of it, and then begin to act as if it exists.

For example, you no doubt would say that unicorns are not real. And yet, you know what one looks like, you’d clearly recognize one if you saw one. In fact, would you even be surprised if you saw one in a zoo?

We also practice word magic when we respond to labels — especially those with political, religious, racial, ethnic or sexual implications — without regard for the context or intended meaning. Some people will immediately react with discomfort upon hearing, or reading, certain words: liberal, right-winger, pro-choice, nigger, spick, kike, Bible-thumper, faggot, dyke, mick, wop, bitch …

A Compilation of Instructive Examples (2008)

We even respond physiologically to words. Have you ever eaten something unfamiliar, then had a negative reaction when you learned what it was?

from The Daily Show, Jon Stewart and John Oliver (2006)

The 3-hour, six-part “Talking Sense” video recordings by Irving J. Lee in 1952 are available for purchase from the Institute of General Semantics. Some of the key points that Lee makes about language:

Sometimes we can learn a lot about our attitudes toward language generally by closely examining the extremes of language, such as language generally considered to be ‘profane’ or ‘obscene’. These first four clips relate to two of the most volatile, incendiary terms in the English language. What can be learned about our everyday words and terms from understanding a little more about these two extreme words? And why is it that we seem to be so immune to understanding the role of context in the meanings we generate? The fifth clip questions what makes something “offensive”; in this case, the significance of the middle finger.

*** Some viewers may find the material in some of these clips objectionable. ***

“The Hurt Talker,” The Daily Show with Jon Stewart

A Compilation of Perspectives