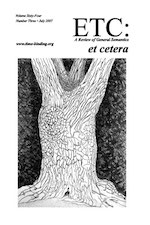 A culture cannot be discriminatingly accepted, much less be modified, except by persons who have seen through it—by persons who have cut holes in the confining stockade of verbalized symbols and so are able to look at the world and, by reflection, at themselves, in a new and relatively unprejudiced way. — Aldous Huxley, “Culture and the Individual” (1963)

During the first months of 2007, the American public, politicians, and media have banded together to up-armor our “confining stockade of verbalized symbols.” Instead of cutting holes through which to self-reflexively evaluate ourselves, our language, and our behaviors, we have reinforced our ancient, pathological attitudes toward words and the people who use them.

The Don Imus affair (Google: nappy-headed hos, jigaboos and wannabees, Rutgers women’s basketball, MSNBC, CBS radio, WFAN, the Rev. Al Sharpton) consumed the most print space and air time. But let’s not forget some of the other examples of language behaviors that have prompted outrage, lawsuits, indifference, or in some cases, applause.

These examples come from just a four-month period. But they reveal just how confining our stockade of verbalized symbols has become. In other words, it’s become almost impossible to talk sensibly about how we talk. Forget about cutting holes … we can’t even make a dent.

Not that some haven’t tried. Compare and contrast these attempts at explanation, elucidation, or explication:

“It’s really hard to address the language of racism without somehow directly engaging in that language.” — Jabari Asim to Stephen Colbert (9)

[After letting loose with 47 “equal opportunity” racial and religious epithets …] “There is absolutely nothing wrong with any of those words, in and of themselves. They’re only words. It’s the context that counts. It’s the user. It’s the intention behind the words that makes them good or bad. The words are completely neutral. The words are innocent. I get tired of people talking about ‘bad words’ and ‘bad language.’ Bullshit! It’s the context that makes them good or bad.” — George Carlin (13)

“It doesn’t matter, the origins of curse words. What matters is that civilization has decreed —arbitrarily, obviously—that certain words are inherently obscene.” — Dennis Prager (14)

“Words don’t mean, only a person does. There is no meaning in a word. We sometimes talk about this as the container myth. Now you can put something in a glass—water, dirt, sand, anything. A glass will hold something, and we can talk about this as a container. A word, however, is not a container in the way a glass is. A container of meaning is a man, a woman. It’s you. It’s you listening, it is I talking. It is I listening, it’s you talking. A word doesn’t mean.” — Irving J. Lee (15)

“Understandably, the use of the word offended the student.” — Katharine T. Bartlett, Duke University School of Law (7)

“There is no excuse for what happened on this campus. There is no context for which that is permissible conduct.” — Steven Pfeiffer, Fulbright & Jaworski (6)

It seems that two conflicting views are at work here, leading to these questions:

From my general semantics perspective, it’s pretty easy to answer no, yes, no, yes, and hinder. What makes this so difficult for most people to understand? Or, what makes it so rewarding for people to perpetuate the “word=thing” identifications?

Language has always been used as a means for rulers to exercise their power over their dominion. Religious leaders, politicians, business bosses, military commanders, teachers, parents, lawyers … virtually everyone is subject to someone else’s controlling or directive language. We have been conditioned to respond to certain words in specific, somewhat predictable ways. Go to church and you can expect to hear language intended to provoke penitence, guilt, grace, thankfulness, humility, or charity. Go to a political rally and you’ll get bombarded with carefully crafted words to evoke patriotism, civic duty, fear, pride, outrage.

As Alfred Korzybski observed in Science and Sanity, “those who rule the symbols, rule us.” Rulers need predictable results and desired reactions. They need their constituents to identify the labels of choice with the rulers’ desired attitudes and behaviors. If the people chose to deliberately and extensionally evaluate the assertions expressed by their rulers, then the rulers might well be forced to rule on substance, rather than by symbol.

Alfred Fleishman, co-founder of public relations giant Fleishman-Hillard, Inc., advocated general semantics in his own unique, street-wise way. One of the simple observations he would share with delinquent and troubled teenagers in St. Louis was, “Just because you call me a son of a bitch, that doesn’t make me a son of a bitch.” He encountered hundreds of youngsters in detention schools and jails who automatically reacted to being called a name … just words … in ways that caused pain, suffering, and despair to their victims, their families, and ultimately themselves. They didn’t stop to think that they could react any differently to the name. The label (boy, nigger, asshole, etc.) made them do it. The devil must be in those words; remember comedian Flip Wilson’s character Geraldine’s universal excuse? “The devil made me do it.”

In the latter case, the listener/reactor denies his own responsibility for interpreting, evaluating, and appropriately responding to the words of the speaker. The words (symbols) ‘cause’ the response, just as Pavlov’s bell ‘caused’ his dog to respond. But Lee and Korzybski would contend that human beings have the capacity to act more appropriately than dogs.

As we learn more and more about our brains and nervous systems, Korzybski’s formulation of the abstracting process continues to be validated. The brain orders and constructs our experiences from our sensory interactions through the nervous system to our ultimate evaluations of pleasure, pain, fear, etc. Therefore, like everything else, meaning is constructed by each of us, individually and uniquely. As Charles Sanders Peirce put it, “We don’t get meaning, we respond with meaning.”

However, a lot of people don’t quite understand this or don’t want to understand it. There are still many who believe that there is an “objective reality” out there that ought to be perceived “as it is.” They rail against “relativism” without acknowledging the inevitable relativism (or to-me-ness) that results from the natural functioning of six billion different nervous systems. Which one of those six billion is the right one to say what is the true or inherent meaning of a statement, an event, or a symbol?

Identifying the ‘Map’ as the ‘Territory’

Those who advocate eliminating or even banning certain words and phrases do not seem to grasp the symbolic nature of words. They misplace or misallocate their ire toward the word itself rather than on the underlying attitude, beliefs, and behaviors of the individuals who use the word.

Although Jabari Asim tries to straddle a difficult line in proposing that some people can use the word nigger but others shouldn’t, I support his statement quoted previously. From a literary and historical context, you cannot teach Huckleberry Finn without using the language of the time and understanding the attitudes of the time. (Not to mention that you can’t re-write what the author wrote.) Neither can you arbitrarily dictate (or request, in the case of Councilman Comrie) that nigger be stricken and banned from music lyrics. If nigger, what next?

The hip-hop world took a lot of the collateral damage from the initial Imus bomb, to the extent that rap/hip-hop icon and impresario Russell Simmons co-authored a statement that read, “We recommend that the recording and broadcast industries voluntarily remove/bleep/delete the misogynistic words bitch and ho” as well as “a common racial epithet.”

As if bleeping accomplishes anything other than calling attention to itself and, by extension, what got bleeped.

If one thinks through the logical consequences of bleeping, one comes full circle to the realization that it’s the context, not the word, that establishes the basis for offense. Even without benefit of visually observing the following phrases spoken, do you have any doubt as to what the “bleep” stands for?

“I said drop your bleeping gun!”
“Go bleep yourself.”
“Get the bleep out of here.”
“You dirty son of a bleep!”
“This tastes so bleeping good …”

Leave it to the comedians to shine illuminating light on this shadowy subject. In their “investigative report” on Councilman’s Comrie’s quest to ban a “word with no meaning,” Wilborne and Oliver point out the potential consequences:

OLIVER: Leroy, are you at all concerned that we are banning one of the most versatile words in the English language? It can be used as a noun …

WILBORNE: Yo, yo, whassup, my nigga?

OLIVER: Are we kissing goodbye to all of this?

COMRIE: I think that all of those usages are just vile and need to be stopped.

OLIVER: What do you say to rappers who need that word in terms of a rhyme scheme?

WILBORNE: I’m not sure about that Leroy. Finish this phrase … “I’m not saying she’s a gold digger, but she ain’t messin’ with no broke …

COMRIE: Hmm. (to himself) “I’m not saying she’s a gold digger, but she ain’t messing with no broke” … fool.

WILBORNE: (pause) Do you understand how rap works, Councilman?

Wilborne and Oliver understand that context determines meaning, and, like George Carlin two generations before them, realize that the English language offers unlimited opportunities to poke comedic fun at our arbitrary and multiple usages. As Carlin pointed out thirty years ago, even order establishes context: “You can prick your finger. But don’t finger your prick!”

A more serious reason to object to any type of ban, particularly with epithets, is that these words carry such strong social stigmas that their usage may serve a valuable purpose. Like the canary in the mine, or smoke that signals the possibility of burning embers, racial and religious epithets can alert us to the possibility of prejudice, bias, and hate within the speaker. If you ban the language, these people may comply with the ban and not say the word, but they may well continue to harbor the feelings and attitudes that may lead to discriminatory and prejudiced behaviors.

Huxley continued his “hole cutter” metaphor with this observation:

What the would-be hole cutter needs is knowledge; knowledge of the past and present history of cultures in all their fantastic variety, and knowledge about the nature and limitations, the uses and abuses, of language.

We can learn a lot from our daily news outlets and entertainment programs regarding our attitudes towards language. Unfortunately, we (English-speaking Americans) seem to be backsliding toward the 19th century in terms of our dependence on the cultural crutch of verbal taboos. Consider how prematurely quaint the words of anthropologist Margaret Mead seem, as reported in an unnamed local newspaper in 1969:

Anthropologist Margaret Mead says that the current binge of written and spoken four-letter words will also pass providing everyone doesn’t become uptight about it. It’s this uptightness in the current phraseology that is at the heart of the problem. We are in a temporary period when it is exciting to light up some-thing that was dark, saying words that were forbidden, exhibiting all sorts of things that weren’t allowed before, but this excitement is going to wear out. (16)

Until we exit this “temporary period” (going on 38 years now) in which we insist on righteously playing got’cha! with offensive language, our public discourse about racism, sexism, violence, drugs, and even taxes will never progress to the substantive from the superficial.

We must be vigilant, however, in clearly discerning and discriminating between the effective uses and the manipulative or ignorant abuses of language. The more we focus on the words, labels, and categories, the less we concern ourselves with the individuals who use those symbols, and the individuals upon whom those symbols are slapped.

Because the words of Irving J. Lee will forever apply: “We tend to discriminate against people to the degree we fail to distinguish between them.”