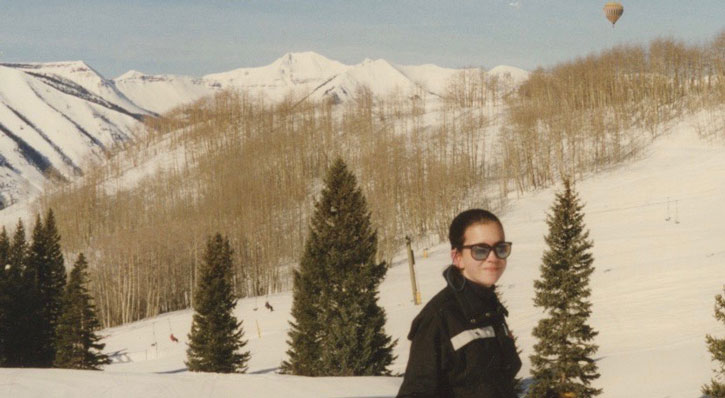 Thanks for opening this edition of my annual year-end review. For me, the year past proved a trifle sporting, as they might say in an old country. Sporting indeed! Looking back to this time a year ago, at the ‘dots’ which comprised the significant aspects of my life, I scarcely could have imagined the unanticipated forms their connections would make in 1997.

Recall that my mother died a year ago after a long struggle with scleroderma. I wrote some words about her in my year-end letter and mailed it to many of my parents’ friends. One of those friends of the family, Donna in Fort Worth, taught school with my Grandmother  and has known her for about 30 years. Donna called my father upon hearing of Mother’s death to extend her condolences. This led to several phone conversations, then they  met for dinner, then went out some more, and then decided to marry in July. Donna has been divorced for many years, is the same age as my dad, and has three children roughly the same ages as my brother, sister and me. I can’t say that I was particularly excited prior to the wedding, but the wedding day turned out wonderfully. The two families met, mingled and began to develop some familial feelings. The fact that Donna’s daughter Cindy and her family happen to live in Tulsa – home of Hanson — particularly facilitated the ‘bonding’ of Stacy, her cousins Jessica and Britni, and Cindy’s daughter Katie. (If you’re wondering “Who’s Hanson?”… either turn on the radio; buy a teen magazine; or spend 10 minutes near any  teenage girl who’s younger than 15, has fewer than six body piercings, doesn’t wear enough mascara to mark a crime scene, and isn’t wearing a Marilyn Manson T-shirt.)

Also recall that a year ago I was engaged to be married myself in March. It didn’t happen. Even today I can’t explain and don’t understand all that went on. But we broke up last January and have only spoken on the phone a few times since. I will say that an interesting example of  “parent learns from child” came from all of this. Stacy was never thrilled about my re-marrying. And I couldn’t relate to why she couldn’t be thrilled…until a few months later, when I found myself in a similar position. I have much greater empathy now for what Stacy went through, and I believe I’ve benefited from actually listening now to some of the words I told her then.

My mother’s younger sister Billie  died on August 4th. She had endured polio as a child and lived with a slight paralysis in her leg as an adult. About five years ago she began suffering from post-polio syndrome, and increasingly found it more difficult to breathe. Though she was just 58, she lived in a nursing home with my grandmother in Carlsbad, NM. As the executor of her estate, I had to take care of her final legal and business affairs, dispose of property, etc. And I have, more or less, legal responsibility for my grandmother (Mom), who suffered brain damage and paralysis from a stroke in 1994. I must say I’ve had better times than performing the role of “Personal Representative” and I know more than I ever wanted to know about the intricacies of the New Mexico Medicaid system. I also experienced the business end of the “bad estate planning” stick, such that I’m determined to make my own mortal self, and my eventual survivor(s), much better prepared. I’ll share recommendations and “lessons learned” about this with anyone who’s interested.

With these personal upheavals I needed a nice, stable work life to maintain some sense of continuity. Oops, I picked a bad year to need that. 1997 started with Texas Instruments announcing the sale of its defense group (including me) to Raytheon. At the time, I was working on two different teams chartered to determine long-term business strategies. You might say that prior to the announced sale I was riding along in the train’s engine, then suddenly I was thrown back to the caboose.

Sensing the turbulent waters ahead, I decided now was the time to bail out. (I realize that mixing of  metaphorical transportation modes may confuse some of you; I know I was.) In July I interviewed with GTE here in Irving. The first thing I heard: “This is a very impressive resume. You’re just exactly who we’re looking for.” I had no doubt I was in! I sat back and waited for an outrageous offer. No, actually, I didn’t just sit back … I more or less gave notice to my bosses at Raytheon/TI that I was ouddaheah! But not so fast, Dilbert-breath. GTE ended up offering, at best, a lateral move which proved unfortunately easy for me to decline. Fortunately, some influential managers around here think I’m worth keeping so they’re letting me help with a major proposal for the next few months. As for the future….who knows?

“Other than that, Mr. Stockdale, how did you enjoy the year?”CAUTION: Proud Parent Pabulum Ahead! Stacy had a memorable year, I think. She experienced skiing for the first time last February at Crested Butte, CO. We had four days of fresh snow, gorgeous weather, and no lines! She had a lesson the first day, then by the third afternoon she was skiing down challenging Intermediate slopes. Now she’s asking when we’re going back. (?)  She continues to play volleyball and basketball and play clarinet in the band. She and four friends put together a terrific Christmas Eve program for families and neighbors. Their unique quintet (a clarinet, flute, oboe, saxophone and cornet) played wonderful Christmas music for us. Her Harwood Junior High band (8th and 9th graders) played a piece for their Christmas program (“Salvation Is Created”) that I played my Senior year in the Honors Band at the WTSU band camp. (Nah, I don’t feel old.) Stacy spent most of the summer obsessed with Hanson, took a break from them in October, and now is back among the fan fold. She got her own phone line for her birthday, had her first ‘date’ to her Junior High’s Homecoming, and last weekend had her first driving lesson with a manual transmission. And I lived to tell about it! She’ll be 15 in June, she’s 5’5”.

After boycotting major league baseball for two years, I decided I had inflicted enough suffering on the Benji Gils of the world and bought Texas Rangers tickets again. By September, Benji and the rest of the Rangers got their re-venge and made me suffer through more bad baseball than I thought possible from players who didn’t have “Jake’s Plumbing and Air Conditioning” stitched on their backs. Of course, the Rangers’ level of badness would cause celebration among the local  basketball contingent known as the Dallas Mavericks. Buying their tickets ranks as my worst financial decision of the year, and second worst decision overall.

For the first summer in four, I didn’t attend the Institute of General Semantics seminar-workshop. I did, however, put together a long-promised (threatened?) adult continuing education class which serves as an introduction to some of the general-semantics principles. The Fun/Ed organization liked the course and ran it in their catalog for three months, but they never got the minimum number of students for it to make. I called it “Learning to Unlearn”, based on the premise that for many of the daily problems and difficulties we encounter, we don’t need to learn new stuff, as much as we need to: 1) apply what we already ‘know’; and 2) un-learn stuff we ‘know’ that isn’t so.

I enjoyed several theater performances, including: Man of LaMancha, Master Class, A Chorus Line, Smokey Joe’s Café, The Music Man, The King and I, and Beauty and the Beast. And I attended four great concerts — Marvin Hamlisch, Earl Klugh, The Rippingtons, and Fleetwood Mac. After four-and-a-half years of committed ‘study’, I finally more-or-less graduated from the local dining/drinking establishment known as Humperdink’s with a B.S. degree. (Which could stand for “Bachelor Survivorship”, or whatever else fits …)

My ever-widening circle of friends and acquaintances grew by 25-30 this year. My best week of the year started with my close friends Liz and Denny’s wedding on November 1st near San Francisco. On the morning of the wedding, I drove into San Francisco and visited with my general-semantics friend Scott, then had a sidewalk coffee with my new step-brother David and his girlfriend Cicely.

That evening at the wedding, I met Joan, Liz’s sorority friend at Lehigh, from Philadelphia. Coincidentally, we were each going to be in New York City the following Saturday. I flew back to Dallas for the work week and to attend the Fleetwood Mac concert Tuesday night. Thursday night my friend Jim, with whom I had planned to stay in Manhattan, called me. He and his partner Jim were in Dallas, on their way to Tokyo on business. I met them for dinner, they gave me the keys to their house. Twenty-four hours after having dinner together in Dallas, Jim and Jim were in Tokyo and I was sleeping in their house in New York City. The next day Joan, from Philadelphia whom I had met in San Francisco seven days earlier, and I rendezvoused at Penn Station and spent the day shopping in SoHo. So is this a small world or what?

But I don’t think it’s just a matter of the geographical world getting ‘smaller’. I’m struck by how much larger my own personal world of experience grows each year. I sense an interesting dynamic at work ….the world ‘out there’ seems to grow smaller and smaller, while my own world of personal experience ‘in here’ continues to expand. And the integration of the two — the world ‘out there’ with my experience of it ‘in here’ — proves increasingly challenging, stimulating, awe-inspiring, and sometimes just flat out fun. That’s where general semantics comes into play.

General-semantics introduced a notion called “time-binding”. I’ve explained this as the passing on of knowledge, experience, lessons learned, cool stuff, neat tricks, etc., from generation-to-generation, as well as within generations. As I see things, there’s no higher human calling than facilitating these types of “time-binding”. I have no clue as to how my current ‘dots’ are going to relate and connect over the next twelve months. I intend, though, to learn and benefit (steal?) from the work of others, including a lot of you. And I hope to reciprocate. As a tiny step toward that goal, I’ve set up my own web site. I hope you’ll ‘drop by’ and visit me/ write to me at: www.stevestockdale.com.

Here’s wishing you meaningful connections and relations in 1998.